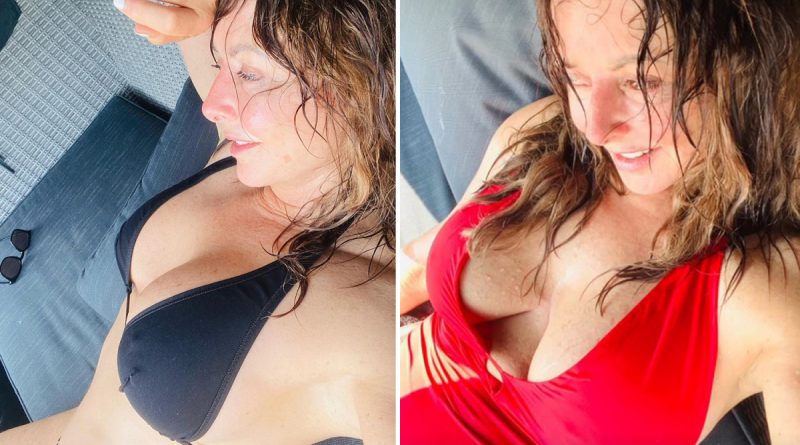 CAROL Vorderman was left red-faced after making a bikini blunder on Instagram.

The age-defying 60-year-old smouldered in a sexy swimwear selfie, but noticed only afterwards the bikini top was inside out.

She poked fun at the mistake in her caption, writing: “And yes, I’m a happy scruff… bikini top inside out, no makeup (with huge apologies to Elizabeth Hurley… Queen of the bikinis).

“One day I’ll learn to posh up a bit… but probably not going to happen anytime soon. Happy Saturday.”

The TV star looked fresh-faced as she went make-up free and posed with wet hair.

Carol has been enjoying a number of trips down by the sea in Wales and recently showed off her water boarding skills.

The mathematician told fans that she spent last week at the beach before heading to Bristol this week.

“This week…raindodging #Bristol #storm. Can someone have a word with Mr RainCloud, in need of more summer.”

Carol is not shy when it comes to posing up a storm on social media and recently shared a showstopping photo of her wearing a revealing red swimsuit.

She posted the pic after a paddleboarding session, writing: “Chillin” alongside two Welsh flags.

She often delights her army of fans with pics of her in bikinis and wetsuits saying she is now “hooked” on life on the water.

Last week she went cave paddling to find some hidden coves, and then stopped at a secret beach for lunch.

She also flashed her tanned legs in a red swimsuit as she went paddleboarding to cool down in the heatwave.

Carol has a long TV career that began in 1982 when she joined Channel 4’s Countdown, saying on the show for a remarkable 26 years.

She stepped down in 2008, making way for the show’s current numbers whizz, Rachel Riley.