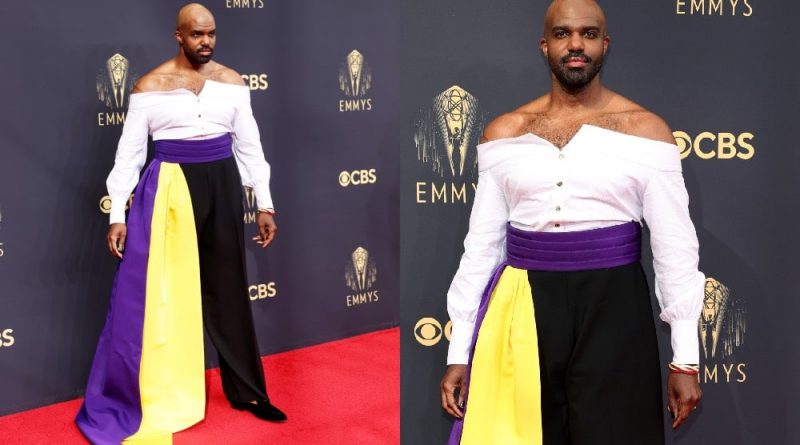 Carl Clemons-Hopkins at the 2021 Emmys. (Getty)

Carl Clemons-Hopkins may not have taken home an Emmy, but they certainly won the night with gorgeous outfit inspired by the non-binary flag.

The Hacks star made history earlier this year when they were nominated for an Emmy for Best Supporting Actor in a Comedy Series. The monumental acclamation secured Clemons-Hopkins’ place in history as the first openly non-binary performer to be nominated in Emmy’s history.

Even though they didn’t take home an Emmy, Clemons-Hopkins stood out from the crowd of luxe gowns and striking tuxedos in their stunning outfit on Sunday (19 September). They proudly strutted down the red carpet parade in a breathtaking black and white Christian Siriano outfit with a Bardot neckline and stand-out sash in yellow and purple.

Sirano confirmed on Instagram that the look was “in support of the non-binary flag” as Clemons-Hopkins “makes history tonight being the first non-binary person to be nominated for Best Supporting Actor at the Emmys”.

Carl Clemons-Hopkins and their breathtaking look was an Emmys highlight

Can we please talk about Carl Clemons-Hopkins from #Hacks in this perfect look on the #Emmys red carpet?!? pic.twitter.com/nlWh7x1MEc

So happy for Carl Clemons-Hopkins as the first openly non-binary performer to be nominated for an Emmy. They looked amazing on the carpet, too.

Ahead of the Emmy Awards ceremony, Carl Clemons-Hopkins told Vanity Fair that any “first” of anything – whether it’s a Black person “nominated for something or winning something” – is cause for celebration. But they said it’s also “just a reminder of how far we have to go for actual equality”.

They added that a lot of people are “still in very real fights to be seen, to be heard, to be equal” and “to be recognised as just human”.

“So I’m very excited about all of these firsts and new and most, and I’m also very aware that that’s just how much more we have to keep going,” Clemons-Hopkins said.