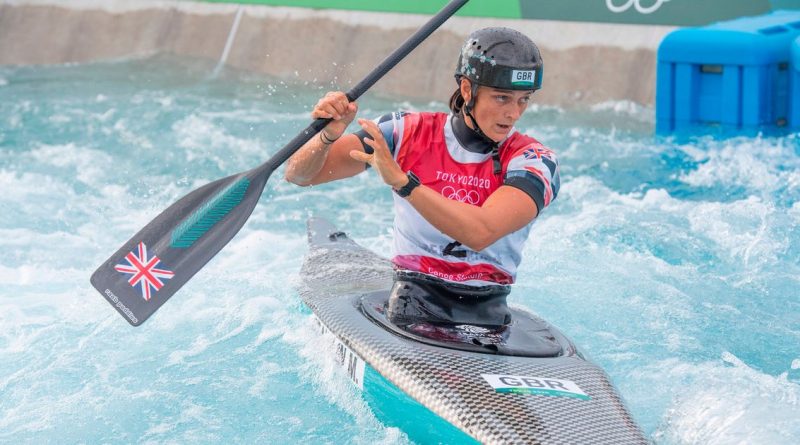 
“I’ve found myself doing things I wouldn’t normally do and actually being okay. Not feeling like I’ve completely messed up and I’m a terrible person”

She had just tamed raging rapids, but Mallory Franklin was talking meltdowns and tears.

A silver medal hung round her neck, testament to her brilliance at a sport Olympic chiefs for too long deemed too tough for women.

The canoe queen from Windsor had put on a show of such fearlessness that Aussie paddling royalty Jess Fox needed to be nigh-on perfect to beat her in a high class final.

Yet when she stepped off the water and onto dry land the warrior in her at first seemed to stay behind in the boat.

Stripped of the certainty with which she negotiated 25 gates, six upstream, en route to the podium, Franklin was ill at ease confronting what doors her achievement might now open.

“If they want an awkward person that can’t answer questions and just hides in her shell then, yeah, sure,” she said when asked how she fancied A Question of Sport .

“I’m not joking. That will be what happens.”

Franklin: ‘I don’t know when it will sink in, probably about five months knowing me’
(

Here is a two-time world champion, a giant of her trade, seemingly unsure of life away from the whitewater.

Yet the longer she spoke the more it became clear how cathartic an experience she had found Tokyo.

That rather than being up the creek without a paddle, she had seen the frailty in others and gained the coping mechanism she felt she lacked.

Franklin was applauded for her performance on Twitter by Andy Murray
(

“I’ve found myself doing things I wouldn’t normally do and actually being okay,” she said. “Not feeling like I’ve completely messed up and I’m a terrible person.

“This has been my first time in an athlete village, being in that environment and realising every athlete is probably going through similar things.

“It was really settling for me to see Adam Peaty at breakfast and see that he was really normal.

“To realise Tom Daley and others are actually human, like the rest of us feeling the pressure and worried whether they’re going to be able to perform.”

Before Tokyo it had been different. The 27-year old said she was “in tears, crying my eyes out, just having a complete meltdown”.

About what? “I can’t fully remember.”

If coming to an Olympics, home of the greatest scrutiny of all, was the ultimate test, it was her good fortune for it to be this one.

The one in which Naomi Osaka and Simone Biles declared it okay not to be okay, leading Rory McIlroy to yesterday praise them for breaking the mental health taboo.

Perhaps empowered by that Franklin took her place on the start line in Rinkaichō and actually smiled.

She had chosen a venue for her upcoming wedding “because there’s a lot of water trickling around which is really settling for me”.

Yet confronted by a camera in her face, knowing millions were watching what she was about to do, she felt an inner peace.

“I want to enjoy this moment,” she told herself. And enjoy it she did.