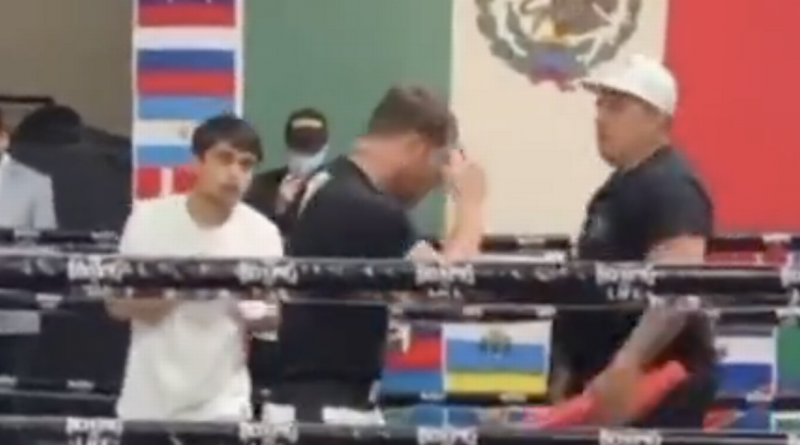 
New footage has shown Pacquiao’s son Emmanuel jr training with pound-for-pound great Alvarez in his gym, along with trainer Eddy Reynoso, offering the youngster tips as they moved around the rign

Manny Pacquiao’s son Emmanuel Jr could be destined for a bright future in boxing after footage emerged of him sharing a ring with Canelo Alvarez.

The 20-year-old was in Alvarez’s California gym to do some work with the pound-for-pound great as he ponders a potential professional boxing career, despite having a number of other options.

The younger Pacquiao’s father was a legendary multiple division world champion, but his son has only started training recently, and is closer to fellow celebrities like Logan or Jake Paul in terms of experience.

He has sampled modelling and acting, and reportedly has also taken a few amateur boxing bouts, with his record currently standing at 4-1-1 after six match-ups.

Pacquiao looked smooth as he worked pads at the gym, as Alvarez was seen casting a watchful eye over the session, and shows glimpses of the promise his father would have shown decades ago.

Alvarez even got more hands on in the session, showing the youngster some techniques to improve his movement as he steps into hooks.

Should Pacquiao continue boxing into the professional ranks, he would join the likes of Campbell Hatton, Conor Benn and Chris Eubank jr as a famous boxing son to become a fighter themselves.

Pacquiao jr was ringside for his father’s last fight against Yordenis Ugas, which saw his father lose and subsequently retire from the sport.

But it’s still a busy time for both the Pacquiao family and Alvarez, and Emmanuel’s father Manny sr is preparing for a presidential run in his native Philippines.

Pacquiao has served as a senator in the Philippines since 2016 and has now accepted the nomination of his political allies during the national assembly of the faction he leads in the ruling PDP-Laban Party.

And Alvarez is currently preparing for an undisputed super middleweight title clash against Caleb Plant in Las Vegas next month.

The Mexican has been unified champion in three of the four divisions he has fought at, but the winner of this bout would make history as the first man to become undisputed at the weight.

Would you like to see Emmanuel Pacquiao Jr make a career in the ring for himself? Let us know in the comments section!

It remains to be seen in Pacquiao Jr will be in attendance at the MGM Grand Garden Arena on November 6 when the fight happens, having stuck around in America to train after his dad returned home.

“Caleb might be on the same level as Billy Joe Saunders and Callum Smith,” Alvarez said at the pair’s pre-fight press conference, which descended into a brawl after a heated face-off.

“But he’s not on my level. I respect that he isn’t here to back down. You can see from today that this is definitely going to be a good fight.

“I know what I need to do and I know a lot about him. He’s a good fighter but I know my skills.

“My experience is going to give me the edge in the fight. I have faced similar stylesto Caleb’s.”

The bout takes place next month, with the winner likely to be recognised as the pound-for-pound best fighter in the sport, particularly if it is Alvarez.