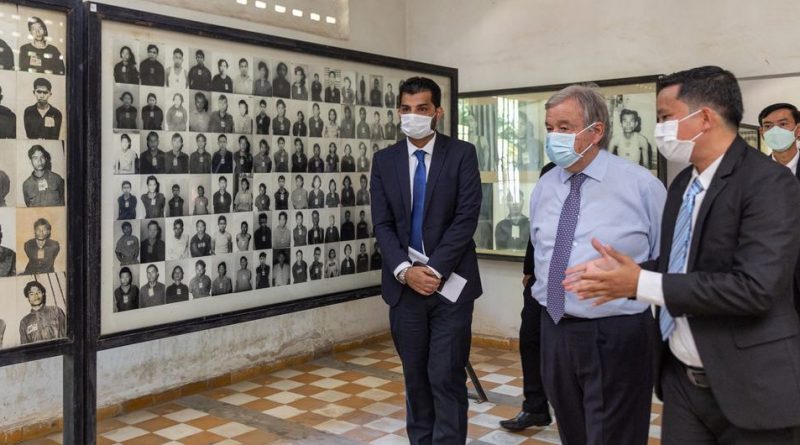 Mr. Guterres was speaking at the Tuol Sleng Genocide Museum, memorial site of the infamous S-21 interrogation and detention centre under the bloody regime, which lasted from 1975 to 1979.

It is estimated that up to 18,000 people from across Cambodia were brought to the facility, located in a former secondary school in the heart of the capital.

Only a few survived.

The Secretary-General was at the Museum  to pay tribute to all the victims and survivors of the Khmer Rouge’s brutality throughout Cambodia.

People were forced to leave major cities to work in agricultural communes in the countryside.

Institutions such as schools, pagodas, industries and factories were destroyed, and intellectuals, professionals and monks were killed.

Overall, nearly two million people, roughly a quarter of the population, are thought to have died during these years of forced labour, starvation, torture and execution.

People brought to Tuol Sleng were photographed and many were tortured, for example to extract false confessions that they were secret agents of the United States government.

Prisoners were detained, interrogated and killed, or taken to another site on the outskirts of the capital called Choeung Ek, one of the many “killing fields” where mass executions were carried out.

Most of the rooms at Tuol Sleng have been kept in the same condition as they were when the Khmer Rouge were ousted by invading Vietnamese troops.

“The suffering that took place within these walls is horrific and shocking. The stories of survival and resilience are moving and inspiring,” the Secretary-General remarked.

Mr. Guterres thanked the Museum for its extraordinary work to raise awareness of the atrocities committed under the Khmer Rouge, as part of efforts to ensure they can never happen again.

He recalled that the Extraordinary Chambers in the Court of Cambodia have held regime leaders accountable for these crimes and provided a voice to victims and survivors.

“Their voices are more important than ever, at a time when hate speech, abuse, discrimination and harassment are on the rise in every corner of the world,” he said.

The UN chief stressed that preserving the memory of those who suffered and died at Tuol Sleng will help to prevent atrocities from being repeated.

“I promised to tell the story that I heard from one of the survivors to my granddaughters and I’ll tell them to convey that story to their grandchildren. It is essential that the memory of what happened here is never lost,” he said.

“By learning to recognize the first warning signs of genocide and other atrocity crimes, and honouring the values of inclusion and dignity, we can lay the foundations for a future in which such horrors can never happen again.”

The Secretary-General was in Cambodia to address the latest meeting between the UN and the Association of Southeast Asian Nations (ASEAN), held last Friday in the capital.

He will next head to Bali to attend the G20 summit, which begins on Tuesday.

The UN chief travelled to the region from Egypt, host of the COP27 UN climate change conference which concludes on Friday.