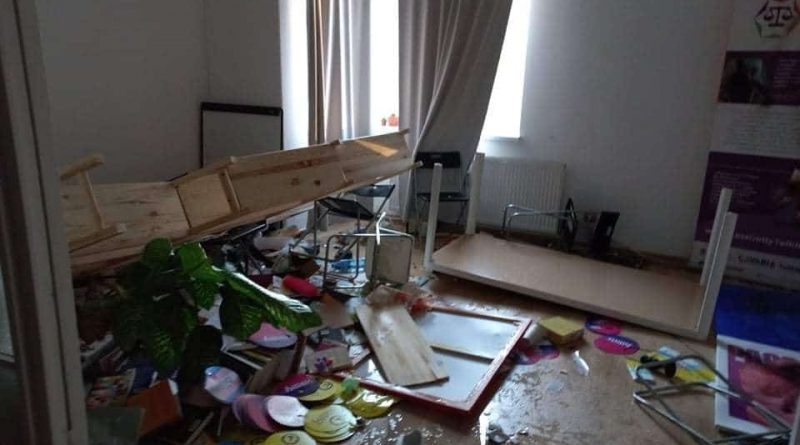 The Rainbow Hub in Sofia, Bulgaria, was ransacked by a group of fascists led by a presidential candidate. (Twitter/BilitisLGBTI)

An LGBT+ community centre in Bulgaria has been “destroyed” in an attack that saw equipment smashed, the space vandalised and one person punched in the face by a group of fascists led by a far-right presidential candidate.

The 30 October attack on the Rainbow Hub, an LGBTI community centre in Sofia, Bulgaria, saw 10 men storm in while two trans women led a community meeting.

Boyan Rasate, a well-known far-right leader in Bulgaria who is currently a candidate in the 14 November presidential elections, led the attack. Rasate is leader of the extremist party Bulgaria National Union and reportedly blew the tires off a moped parked outside the Rainbow Hub as he and the others fled after destroying the LGBT+ centre.

The police have launched an investigation, but Rasate has immunity from being detained due to being a presidential candidate. He told local media on Sunday (30 October) that he couldn’t comment on the anti-LGBT+ attack.

In 2008, Rasate was sentenced to six months in prison for a violent homophobic attack on the first-ever Pride parade to be held in Bulgaria.

Bilitis Foundation, which is the oldest active LGBT+ organisation in Bulgaria and co-manages the Rainbow Hub, posted photos of the vandalised community centre on social media and explained what happened.

“Our office and LGBTI community center in Sofia – Rainbow Hub – was attacked tonight during a trans community gathering,” the Bilitis Foundation tweeted. “The leader of the attack Boyan Rasate is well known for his LGBTI-phobic actions and statements, and is currently running for president in Bulgaria.”

The group continued: “Around 5.30pm a group of about 10 men and women stormed in the Rainbow Hub which is managed by Bilitis Foundation and GLAS Foundation, hitting our colleague Gloriya in the face, and vandalising the space, smashing equipment and furniture.”

The attack comes just four days after an anti-trans ruling by the Bulgarian Constitutional Court, which redefines the Bulgarian constitution so that the term “‘gender’ should be understood only in its biological sense” – even though, in Bulgarian, there is one word that means both “sex” and “gender”.

This ruling is similar to that decreed by Hungary’s fascist dictator, Viktor Orban, in 2020, which also saw the word used for “gender” redefined to mean only the sex assigned at birth. These changes effectively erase the existence of trans, non-binary and intersex people in the law, official documents and language.

Our office and LGBTI community center in #Sofia – Rainbow Hub, was attacked tonight during a #trans community gathering. The leader of the attack Boyan Rasate is well known for his LGBTI-phobic actions and statements, and is currently running for President in #Bulgaria (read ⬇️) pic.twitter.com/StwibomFGL

“All I ever aimed for was creating safer spaces for our community,” tweeted Gloriya Filipova, project coordinator at the Bilitis Foundation, who was punched in the face during the attack on the Rainbow Hub.

“Yesterday my biggest fear came true: our community center was destroyed and I got punched in the face. I’m sure that we have enough love to heal, but this really hurts. It is time for the [Bulgarian] institutions to act.”

ILGA-Europe condemned the attack and urged Bulgarian authorities “to publicly condemn the attacks, investigate and sanction the attackers”. They were joined by other prominent LGBT+ rights organisations, including EuroPride, in condemning the attack and demanding justice.

BREAKING: As the Rainbow Hub in Sofia was running a trans event this afternoon, nationalist thugs forced their way in and attacked the organisers and guests, and trashed the venue. We stand with @BilitisLGBTI and GLAS Foundation and all the community in Bulgaria. pic.twitter.com/gaCL0zePeG

What a cowardly attack on the #rainbowhub in #Sofia and @BilitisLGBTI. Boyan Rasate & his goons are exemplary for the degradation of #Bulgarian politics. If the #EU is worried about #HumanRights and #RuleOfLaw, stop looking only at Poland and Hungary, but finally act on Bulgaria https://t.co/MPuQ8H7KmQ

The Bilitis Foundation has launched a crowdfunder to help rebuild the Rainbow Hub. Details can be found here.

How you can help?
👉 condemn the attack on social media
👉 ask from politicians in your country to write to their colleagues in Bulgaria and demand proper investigation
👉 help us rebuilt our safe space:
IBAN: BG83FINV91501214904814
SWIFT: FINVBGSF
Holder: Bilitis Resource Center