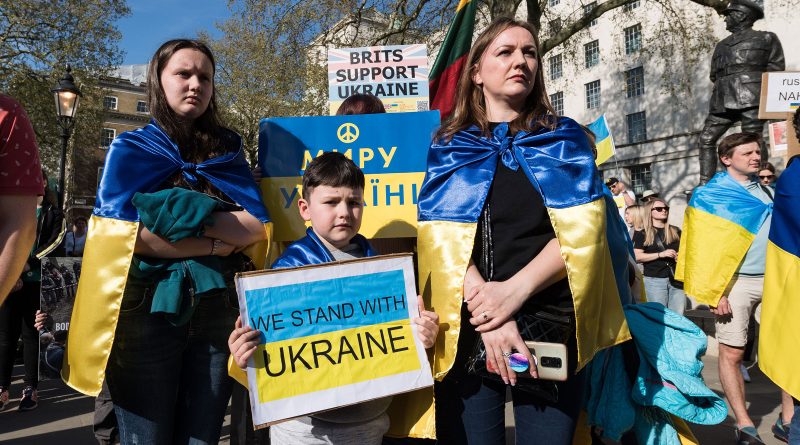 
When Russia launched its full-scale invasion of Ukraine on Feb. 24, Olha Plyushch, like so many other Ukrainians, was in a state of panic. “Until the last moment, we actually believed that there would be no invasion,” she says. But as missiles rained down on Ukraine, the 36-year-old and her 12-year-old daughter Sandra packed up and left their apartment in Kyiv, a city she had called home for 20 years. Plyushch’s mother and sister, who lived nearby in Ukraine’s capital, joined the pair as they made plans to flee the city. They didn’t have a car but a friend who worked at a car rental company gave them keys to a vehicle. As the four set out for a 10-hour journey from Kyiv to Dnipro, where her mother’s husband has a home, they could hear Russian missiles along the route. “It was a very scary experience,” Plyushch says.

The day after Plyushch, her daughter, mother, and sister left Kyiv, she says, Ukraine’s armed forces shot down a Russian drone above her apartment in the capital; Moscow has continued to attack the area since. “Our house is still there,” Plyushch says. “But everything is very uncertain.” The ordeal made her daughter more fearful about staying in Ukraine. Toward the end of April, the two drove back to Kyiv and caught a train to Warsaw, where they stayed for one night, before flying to the U.K. “We didn’t have many options until the U.K. launched the Homes for Ukraine program,” she says.

Plyushch’s story is just one among the 106,000 Ukrainians who have arrived in the U.K. under a novel government program unlike anything else found in Europe. The Homes for Ukraine initiative allows any Ukrainian to come to Britain so long as they find a host willing to commit to providing a spare room for a minimum period of six months (and fill out reams of paperwork). Because the program launched on March 18, those who took part from day one hit that milestone in mid-September. But the peak flow of arrivals came in late April and early May, meaning that thousands of Ukrainians will soon need to find alternative arrangements or risk facing homelessness. “We are deeply concerned at the growing number of Ukrainians presenting as homeless to their [local government] council, and in particular the significant rise in the number of those who arrived through the Homes for Ukraine scheme,” says James Jamieson, chairman of the Local Government Association (LGA), the national voice of local councils, in a written statement to TIME.

One-quarter of hosts do not plan to continue past six months, according to the latest survey by the U.K.’s Office for National Statistics, which was published in August. (An additional 15% of respondents said they were unsure about their plans after six months.) While Ukrainians have come to the U.K. on a staggered basis since March, The Guardian reports that about 14,000 Ukrainians are expected to reach the end of their six-month stays by Christmas. The latest U.K. government data show 2,985 Ukrainians have already registered as homeless in England.

Critics say that the risk of homelessness reflects the unique nature of Homes for Ukraine, which leaves most of the heavy lifting to private initiative. The program’s launch came on the heels of intense domestic criticism of then-Prime Minister Boris Johnson for dragging his feet over welcoming Ukrainians. By early March, for example, the European Union had already approved a plan to grant Ukrainians the automatic right to live and work across the 27-member bloc for one year. Poland had already taken in over 1 million Ukrainian refugees by March 7, compared to 50 Ukrainians who had been granted refugee visas for the U.K. (Ukrainians are not granted formal refugee status under the Homes for Ukraine initiative.) “This is total disgrace. Desperate Ukrainian families are being turned away and let down in their hour of need. Home Office needs to get a grip of this fast,” tweeted Yvette Cooper, an opposition Labour party MP, referring to the government department overseeing borders and immigration.

A number of similar Facebook groups sprang up around the time of Shore’s initiative. These ad hoc groups have helped match thousands of Ukrainians with hosts, as well as providing a forum for both parties to obtain information and seek advice. (In September, Shore took the decision to stop permitting new posts, given all the groups that were up and running.) Registered charities like Opora—where Plyushch works part-time as a community administrator, in addition to her role teaching English at the Ukrainian Institute London charity—have also stepped in. Stanislav Beneš, managing director at Opora and an expert on homelessness, estimates that Opora has matched at least 8,000 Ukrainians with hosts—a conservative figure because “they can match on our platform and then take it forward themselves” when it comes to the Home Office paperwork.

But there is now a major shortage of hosts. “We’ve got a massive backlog of people requiring matching,” says Alice Good, who set up the Sunflower Sisters, a voluntary group of women who support Ukrainians arriving in the U.K. “It’s very depleted,” adds Beneš, referring to Opora’s current pool of sponsors. “At the beginning, it was very much the other way around. It was many, many sponsors and not that many Ukrainians. Because there wasn’t much awareness of the [Homes for Ukraine] scheme.”

That reversal reflects many factors, not least the cost-of-living crisis driven by rising energy prices. Inflation is currently running at 11.1% in the U.K., a 40-year high. Meanwhile, Finance Minister Jeremy Hunt unveiled a massive package of tax hikes and spending cuts on Nov. 17 to plug a so-called “fiscal black hole,” with the U.K.’s fiscal watchdog forecasting that living standards would shrink 7% over the next two years.

Read More: How Western Leaders Can Keep Up Public Support for Ukraine

Amid these dire economic conditions, both local governments and campaigners are scrambling to find ways to bring in new hosts—or keep existing ones. “It is absolutely crucial that support to sponsors is enhanced as inflation and energy costs increase so new or existing hosts are encouraged to sponsor in the longer term,” says the LGA’s Jamieson. Hosts receive £350 ($429) in monthly assistance from the government but a proposal to double the monthly payments to £700 ($859) was shelved in October. Some councils, concerned about the looming homelessness crisis, have begun on their own accord to top up the government’s “thank you” payments.

A spokesperson from the Department for Levelling Up, Housing, and Communities tells TIME in an email that councils “have a responsibility to support Ukrainians who are homeless or at risk of homelessness, including providing temporary accommodation where required to ensure no family is without a roof over their head.” The government has pledged councils funding of £10,500 ($12,878) per person for a year for those under Homes for Ukraine. But the LGA’s Jamieson says that council housing and homelessness services are “under significant pressure” and that “urgent solutions to pressing housing needs in the short and the long term” are needed.

Ukrainians and their supporters demonstrate outside 10 Downing Street in London on April 16, 2022 against Russia’s military invasion of Ukraine.

Opora’s Beneš sees a push for re-matching Ukrainians with current or new hosts as a “viable short-term solution.” But “unless there is a very concerted effort nationally to try to get more people on board and to incentivize them to get on board, the rematching system is not going to be successful,” Beneš says. And while the sponsorship system allows Ukrainians to seek accommodation in the private rental market, that option is not possible for many, with rents hitting record highs and landlords demanding six or more months of payments upfront given Ukrainians’ lack of U.K. credit history or ability to secure local guarantors to support their application.

It’s an issue that Plyushch grappled with just over four months after arriving in Britain. Her sponsor, Ana, had warned her that she would be moving out of London for another city in England. (Plyushch and Ana worked together in Ukraine; Ana is Ukrainian but has lived in the U.K. for 20 years.) When Plyushch first began looking at places to rent, it was “impossible because it was so expensive.” She says her options were to move with Ana to a new city, find another sponsor in London, or return to Ukraine.

Fortunately, Plyushch managed to find another sponsor, Elizabeth, and moved to a new area of London in September; in late November, Sandra finally enrolled in an English school. Despite the hurdles, Plyushch and many other Ukrainians are quick to point out that, thanks to the generosity of so many Britons, more than 100,000 of their compatriots have been able to settle in the country. The coming months will be an uncertain time for Ukrainians in the U.K.—with big questions around what comes next—but many express gratitude for all the Britons who have opened up their homes so far. “They’re not responsible that Russia attacked Ukraine. They were trying to be helpful,” Plyushch says. “And they are very helpful.”

With stable work and a place to live in London, Plyushch considers herself “very lucky.” But Ukrainians like her and local authorities warn that more support will be needed in the coming months. “Things are getting worse in Ukraine,” Plyushch says, referring to mounting casualties and widespread blackouts as Russia targets Ukraine’s energy infrastructure. She says she sympathizes with concerns about the cost-of-living crisis. Still, she wonders, “what about the cost of life?”

Write to Adam Rasmi at adam.rasmi@time.com.