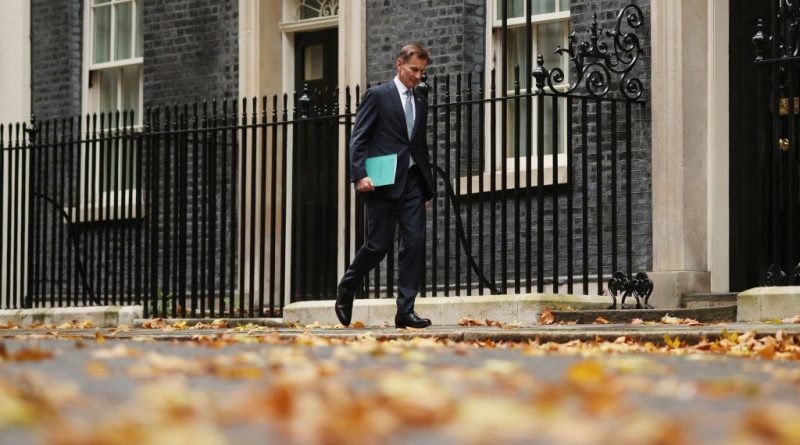 
Set against the backdrop of a recession and the highest inflation rate in decades, British Prime Minister Rishi Sunak and his finance minister, Jeremy Hunt, unveiled on Thursday a massive package of spending cuts and tax rises designed to balance Britain’s financial books and restore its credibility in international markets. But the question on everyone’s mind is whether the latest plans are a political decision, not an economic necessity—and one that could hurt ordinary Britons while putting the U.K. on shakier economic footing.

Britain’s latest economic plan—its second in as many months following former Prime Minister Liz Truss’s market-crashing budget in October—sets out £55 billion roughly divided between public spending cuts and tax hikes over the next five years. Among the main tax and spend measures include a freeze on the income threshold at which people begin to pay taxes (effectively a stealth tax that results in people paying more in taxes as their wages rise with inflation) and an increase in the windfall tax on oil and gas producers. Many of the proposed public sector cuts will not take effect until after the next election, slated for January 2025 at the latest, thus forestalling some economic pain and creating a political problem for the next government.

The Office for Budget Responsibility, a fiscal watchdog, released its November growth forecast following Hunt’s statement—predicting that Britain’s economy would shrink by 1.4% next year, with living standards falling 7% over the next two years and wiping out the last eight years of gains.

The scale of the economic overhaul might remind many Britons of the austerity measures introduced by David Cameron’s government in the aftermath of the 2008 financial crisis under then-finance minister George Osborne, resulting in what a United Nations report described as “great misery” for many Britons that included decimated public services and rampant poverty, contributing to people dying younger across the U.K. In a statement to the House of Commons on Thursday, Hunt, who once described Osborne as his “old friend,” said that the plan would help Britain “face into the storm,” while prioritizing stability, growth, and public services.

No one can say that they weren’t warned austerity was coming. In his first speech outside 10 Downing Street last month, Sunak, who took office with the support of around 200 Conservative MPs after Truss was forced to step down, told Britons that “difficult decisions” would have to be made in order to restore economic stability and confidence in the country. His remarks came on the heels of weeks of economic insecurity following his predecessor’s libertarian gamble that tanked the pound and cost the country an estimated £30 billion ($35 billion), or nearly half of the country’s so-called “fiscal black hole,” after Truss’s government announced a series of unfunded tax cuts that would largely benefit the wealthiest Britons, spooking global markets and prompting a rare rebuke from the IMF.

Read More: Why U.K. Nurses Voted to Strike for the First Time Ever—and What That Means for Hospitals

As Sunak—who was previously finance minister under former Prime Minister Boris Johnson—and Hunt have suggested, filling this black hole is imperative to restoring sound public finances and British credibility on the world stage. But many economists take a different view. As they see it, the black hole is not so much an economic certainty but a cosmic mirage—one that risks plummeting the country further into recession and stunting growth at the worst possible time.

For all of the focus on the fiscal black hole, there doesn’t appear to be a clear public understanding of what it actually means. According to James Meadway, the director of the Progressive Economy Forum and a former economic advisor to former Labour Party Shadow Chancellor John McDonnell, it is “this certainly colorful metaphor for something very technical and imprecise.” The arithmetic behind the so-called black hole is based on Britain’s economic growth forecasts (which is lagging behind other G7 countries), the interest rates on the government’s outstanding borrowings (which soared under Truss, but have fallen since), and the government’s own debt target levels, explains Meadway. George Dibb, the head of the Centre for Economic Justice at the liberal Institute for Public Policy Research think tank, put it like this: “The black hole is the difference between the government’s own stated fiscal rules and their spending plans.”

In the case of this government, the target is for debt to fall as a share of the economy within five years. In other words, how big the black hole is depends in part on what the government deems to be sustainable public finance. “This context of black holes makes it sound like some kind of hole that we are about to fall into [or that] there are red lines, which if we cross, the economy is going to go into crisis—and that’s not the case,” says Dibb. Rather, the fiscal black hole “is the result of political choices,” he says. “If the government chooses to have a certain fiscal rule, that black hole could disappear instantly.”

None of this is to say that Britain’s economic outlook is at all good. The country has taken on considerable debt in its response to the COVID-19 pandemic as well as its efforts to shield British households and businesses from the worst effects of the energy crisis spurred by Russia’s invasion of Ukraine. Inflation, which last month hit a 40-year high of 11.1%, is chipping away at the value of the government’s previous commitments, including for sectors that are already being squeezed such as the National Health Service. Public sector workers such as rail operators, teachers, and nurses are demanding higher wages to keep up with inflation. It hasn’t helped, of course, that the interest rates on government borrowing have also soared, thanks in large part to Sunak’s predecessor Truss.

“We are materially worse off given rising energy prices and rising government debt—there is no way around that,” says Dibb. But as he and others argue, massive spending cuts won’t resolve these issues. Rather, they simply create a “doom loop” in which a lack of investment leads to low productivity and slower economic growth or even a recession, thus triggering continued spending cuts and tax rises that can even lead to higher debt levels had austerity not been pursued. “Cutting your spending as we go into recession is the opposite of a Keynesian response,” he says, referring to a school of economic thought that calls for economic stimulus in difficult conditions.

Part of the reason that governments resort to spending cuts is because they are politically easiest to do. They are also bolstered by the argument, made by those who helped introduce austerity in 2010, that spending cuts give governments more capacity to borrow when major crises such as the COVID-19 pandemic arrive. But this, like the fiscal black hole itself, can be misleading. Because what Britain had in financial readiness to tackle the pandemic, it lacked in public health sector resilience to deal with its worst effects, in part because the National Health Service had been was crippled by years of austerity. “You’ve chased this financial outcome, the government seems to have less debt than it might have otherwise, you have much more capacity to borrow,” says Meadway, “but you’ve actually damaged the real economy and wider society, which is your real barrier against shocks in the future.” In apparent anticipation of concerns over the NHS, Hunt announced that the government would commit to increase the health service’s budget by an extra £3.3 billion in each of the next two years.

While the desire for fiscal responsibility is one reason that the government has taken these budgetary steps, the other stems from its desire to restore Britain’s international credibility, especially after Truss’s tax cuts unleashed turmoil on the financial markets. “They want to demonstrate that the grown ups are back in the room and these people are back in charge who are sensible and doing all the things which are not going to lead to further market turmoil,” says Dibb. But in seeking to please the markets, however, the government may have overcorrected—inflicting more economic pain than is strictly necessary.