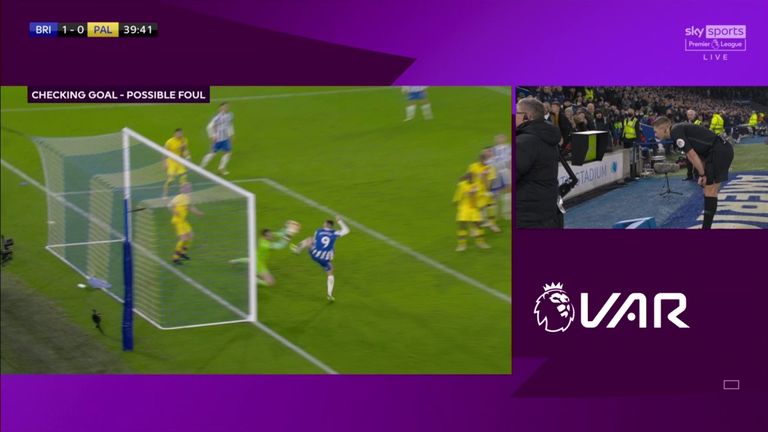 
Brighton left it late against Crystal Palace again as Joachim Andersen’s own goal cancelled out Conor Gallagher’s strike in a dramatic 1-1 draw at the Amex Stadium.

In a drama-filled first half, Graham Potter’s side were twice denied an opener during a crazy few minutes in which they missed a penalty and had a goal disallowed.

Pascal Gross’ poor strike from the spot was kept out by Palace goalkeeper Jack Butland after Joel Veltman was adjudged to have been fouled by Will Hughes at a corner following a VAR intervention.

There was barely any time to draw breath before Neal Maupay bundled the ball into the back of the net, but Brighton’s celebrations were soon cut short. Referee Robert Jones was once again called to the pitchside monitor and he again reversed his decision, ruling Maupay had knocked the ball out of Butland’s hands.

Brighton were quickly out of the blocks again in the second half and they were inches away from the lead again when Jakub Moder’s back-heel looped up and over Butland before striking the top of the bar as Palace survived.

However, completely against the run of play, Palace snatched the lead through Gallagher. The on-loan Chelsea midfielder emphatically fired his seventh Premier League goal of the season into the right corner after Jeffrey Schlupp pulled the ball back from the byline.

It looked like it was going to be one of those nights for Potter, but just as they did in the reverse fixture at Selhurst Park earlier in the season, Brighton struck late, levelling with three minutes remaining. Maupay worked his way into the box past Joel Ward and his low cross was turned into his own net by Palace defender Andersen as the hosts finally got their reward.

There was still time for one final chance for the hosts as Danny Welbeck got the wrong side of Marc Guehi to meet Solly March’s cross, but arching backwards, he could only head over as Palace survived to secure a point.

The draw sees Brighton move up to eighth, while Crystal Palace also move up the table into 11th.

Brighton are back in action on Tuesday when they face Chelsea at the Amex Stadium in the Premier League (kick-off 8pm).

Meanwhile, Crystal Palace’s next game is on Sunday, January 23 when they host Liverpool, live on Super Sunday on Sky Sports; Kick-off 2pm.