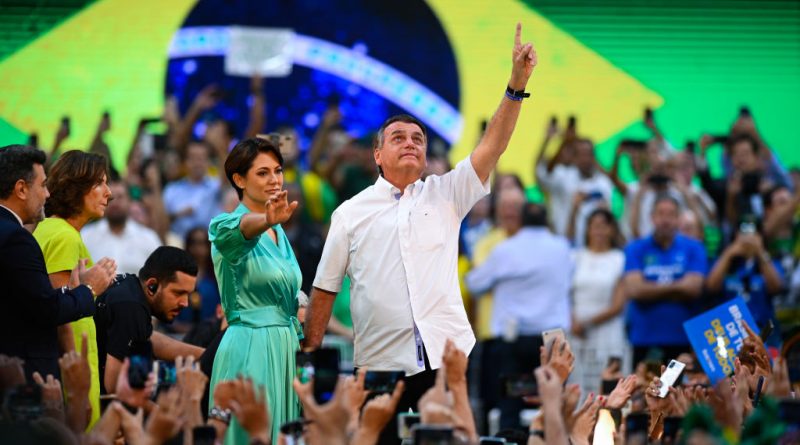 
Michelle Bolsonaro wants her fellow Brazilian women to see her husband, far-right president Jair Bolsonaro, in a new light. The first lady plays the starring role in a campaign ad broadcast on Brazilian television on Tuesday. In it, smiling women relate how their lives have improved under four years of Bolsonaro’s government.

“If you think it’s strange that Jair has done so much to protect women,” Michelle then says, “that’s because you don’t know the President.”

The ad, and an increased focus on female voters in recent weeks, shows that Bolsonaro has accepted what pundits have long warned: he has a women problem.

Polls for Brazil’s 2022 election suggest female voters are far less keen on the incumbent than their male counterparts are. Just 29% of women plan to vote for Bolsonaro, compared to 46% for his main rival, Luiz Inacio Lula da Silva. The gap between the two is much narrower among men, with 39% for Bolsonaro and 43% for Lula, as the leftist former President is known.

Read More: What to Know About Brazil’s 2022 Elections

Many things may be putting women off Bolsonaro. His platform’s core elements—liberalizing gun use and protecting national sovereignty—aren’t typically ranked as important by female voters. And the former army captain has a lengthy history of misogynistic and racist rhetoric. As a lawmaker in 2011, he said in a televised interview that his sons would never fall in love with Black women because “they’re very well educated.” In 2014, Bolsonaro told a female member of Congress, “I wouldn’t rape you, because you don’t deserve it.”

Then there’s his tasteless unofficial slogan: “imbrochável.” Used frequently by Bolsonaro, and chanted at recent rallies, it has been translated as “never limp” or “unfloppable,” and is meant to suggest that the 67-year-old President is full of priapic vigor.

Bolsonaro’s belated overtures to women are, however, falling flat. In the final month of the campaign, he has placed Michelle front and center, in a bid to soften his image, and used interviews to highlight a narrow list of pro-women achievements, such as the large number of women among rural landholders who have received property deeds under his government. Yet at the same time—sometimes in the same breath—the President has continued to stumble into sexism.

“Good news here for women,” Bolsonaro said in a Facebook livestream on Sept. 1, as he talked about a reduction in femicide over the last year. “Although good news for women is kisses, roses, gifts, vacations… right? Is that what you like?” A week later, at a rally for Brazil’s independence day, he called women “princesses” for “unhappy men” to marry.

The President made headlines during a TV debate last month when he angrily attacked a female journalist, Vera Magalhães, after she cited his poor record on COVID-19 vaccines. “You must fall asleep thinking about me, you’re obsessed with me,” he told her. “You’re a disgrace to Brazilian journalism.”

Magalhães, who has since suffered a wave of abuse from Bolsonaro supporters, tells TIME that it’s not surprising that the President is struggling to stick to a women-friendly script. “This is his problem,” she says. “To maintain his more radical base, he needs to be the bold, belligerent macho man, and so when he tries to make himself seem moderate like this, he fails.”

Beatriz Rey, a visiting fellow at the SNF Agora Institute at Johns Hopkins University, studying Latin American politics, agrees. “He knows that he needs more female voters, and still he’s out there saying these things,” she says. “It suggests this level of misogynistic behavior is just ingrained in him.”

Such behavior could prove fatal to his campaign. Though Bolsonaro is narrowing Lula’s lead as the election’s first round approaches on Oct. 2—a second round will take place in November if no candidate wins more than 50%—polls suggest that the remaining undecided voters are up to twice as likely to be women than men.

A woman stands at the doorway of her house at the Coelho favela on the banks of Capibaribe river in Recife, Pernambuco, northeast Brazil, on Sept. 10, 2022. Some 33.1 million Brazilians live in hunger, an issue looming large in October presidential elections.

As Bolsonaro courts female voters, his campaign has highlighted “more than 70 laws approved by the President to help women.” None of these pieces of legislation were proposed by Bolsonaro’s government, according to Brazil’s Estadão newspaper. Many are only tenuously related to women’s rights—for example, the creation of a national day for the prevention of diabetes. And some, such as a 2021 menstrual health law, were enaccted despite direct opposition from Bolsonaro: the President initially vetoed a provision to distribute free sanitary products to low-income women, before instituting the policy by decree five months later after a backlash. He also vetoed an increase in pandemic aid for single mothers, citing budgetary limits, before Congress overruled him. (His government did, however, find roughly $800,000 for Viagra and penile implants for the armed forces.)

The President has pitched himself as particularly tough on domestic abuse, saying in a television interview Tuesday that rates of gender violence have fallen “a shocking amount” under his government. But a report published this year by the Brazilian Public Security Forum, a nonprofit, found that number of victims of femicide had slightly increased, from 1,229 in 2018—the year before Bolsonaro took office—to 1,341 in 2021. “Practically all other indicators on violence against women showed growth” in 2021, the report found, including cases of rape and threats.

Bolsonaro’s biggest hurdle with the female electorate, however, may not be a lack of gender-based policies. The president has put guns at the center of his presidency: since taking office, he has issued more than a dozen decrees loosening restrictions on gun ownership, and the number of firearms in private hands in Brazil has doubled since 2018 to 2 million, according to analysis shared with NPR.

During his campaign, he has tried to frame the proliferation of guns as a boon for women. “When you need to change a tire on the road at night all alone and you see people coming towards you, what would you rather have in your bag: the Maria da Penha law [a piece of domestic-violence legislation passed under Lula]? Or a gun?” he asked the crowd at a women-only campaign event on Sept. 3.

But an overwhelming 82% of Brazilian women oppose increasing the population’s access to firearms (compared to 63% of men), according to a recent poll for BBC Brasil. That is likely because women “know the ones who will be killed by those guns are their sons, or themselves in domestic violence,” says Bianca Santana, an activist for the feminist and Black rights movements.

Santana says Bolsonaro’s campaign has paid little attention to the issues that affect most women’s daily lives, such as Brazil’s growing hunger crisis. “Women are often the ones in charge of feeding their family or their community. When they can’t afford to buy food, it becomes very important to them that Bolsonaro doesn’t prioritize that.”

Women pray during the ‘Women for Life and Family’ event organized by the Liberal Party-Women in support of Bolsonaro, in Novo Hamburgo, Rio Grande do Sul State, Brazil, on Sept. 3, 2022.

Bolsonaro’s biggest bet to reach women has been on the first lady. The President met Michelle, his third wife, in 2007, when he was a 52-year-old congressman and she was a 25-year-old parliamentary secretary. A member of Brazil’s large evangelical community—a crucial demographic for Bolsonaro—she has featured prominently at rallies this year, rousing crowds in the style of a pastor, analysts say. She has tried to smooth her husband’s aggressive image. “This man has a pure heart, a clean heart, in addition to being beautiful,” she said at his campaign launch in Rio de Janeiro in July.

The first lady represents a narrow section of Brazilian women—young, white, rich, conservative. And she has generated controversy with her highly traditional views on a woman’s role in society. “The wife is the husband’s helper, isn’t she?” she said at an event on Wednesday.

That brand of womanhood appeals to “a certain part of the female electorate,” Magalhães says, because “the term feminist has been really stigmatized in Brazil in recent years.”

Still, Michelle’s appeal is limited: though Bolsonaro’s poll ratings with women jumped six percentage points between June and July, when she hit the campaign trail, they have barely budged in the last two months, with a wide gap persisting between Bolsonaro and Lula.

Lula has made some gaffes of his own. At a rally in August, he gave a less-than-inspiring exhortation against domestic violence. “If you want to hit a woman, go hit her somewhere else!” he told the crowd. He also refused, during a recent debate, to commit to gender parity among senior roles in his cabinet should he win, saying only that women would have a “very strong presence.” But Santana says Lula’s record in office and his discourse on women’s rights is “a world away” from Bolsonaro’s: his 2003 to 2010 government set up powerful equality commissions to guide policy and oversaw a marked increase in women’s participation in the workforce.

The leftist should be wary of taking women for granted, however, Santana cautions. Turnout at previous elections among women has been much lower than among men. “Women’s votes will be decisive at this election,” she says. “But we need to make sure they cast them.”