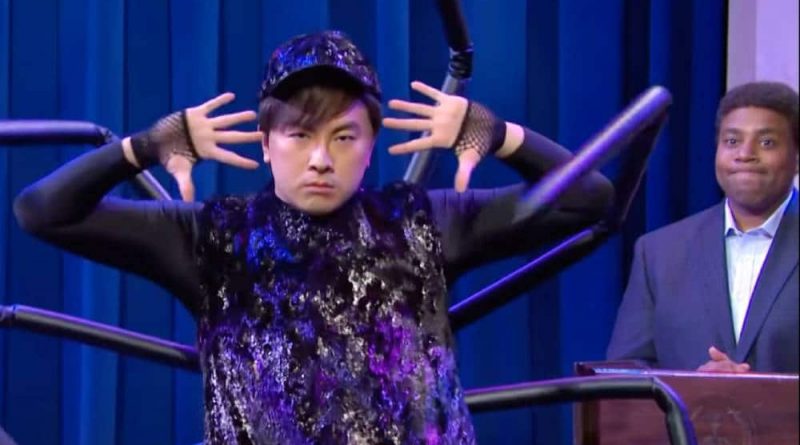 The pair played middle school students presenting an assembly on insects– “sort of like Burning Man for the weird kids” – only, Yang was determined to outshine his classmates.

At one point, one of the teachers (played by Kenan Thompson) called out “Russell” – Yang’s character – for his enthusiastic performance, only for Russell to demand: “Call me daddy”.

When pressed for some actual scientific facts about his assigned bug, Yang listed all the ways his insect was down to party.

“I’m hot, I party, I walk into the room and I am respected – no more questions!” he screamed, before breaking into a dance moment.

He then seemingly tried to do a death drop mid-performance but “got scared” because he “didn’t want to split my a** open in front of the judges”.

The teachers questioned what this kid’s “deal” is, and it’s revealed that one of his dads is an “exec at Bravo” while the other is a Republican.

And how does the daddy long legs trap its prey? “I slam my credit card down and say: ‘Daddy’s got it.’”

At one point, another classmate asks why there isn’t a “mommy long legs”. A furious Russell threatens her: “I’ll scare you in the shower later, b***h.”

Fans were in stitches after Yang’s daddy long legs eleganza, saying he is “killing it” on the show.

Next time I freak out when I see a spider, I think I will think of Bowen Yang as Daddy Long Legs and everything will be alright 🤣 https://t.co/mDgTTC6ihV

Why is it my favorite Bowen Yang roles have been an iceberg and a spider? https://t.co/s7F32LXAzE

Bowen Yang is a national treasure. I have tears from laughing so hard watching him as daddy long legs.

i will only be thinking about bowen yang’s “daddy long legs” from SNL for the foreseeable future pic.twitter.com/uFVvIhQDzM

Bowen Yang didn’t only steal the show with his daddy long legs performance. He also trended on social media thanks to his hilarious appearance as a “proud gay Oompa Loompa” on SNL’s Weekend Update segment.

Co-host Colin Jost introduced the impeccable character in a segment to discuss the unsafe working conditions in Willy Wonka’s chocolate factory. But then Yang’s Oompa Loompa condemned Jost for outing him on national television.

“Now I guess I have got to call my parents,” Yang said as the crowd laughed. “They live in Loompa-land. It’s not as progressive as here. They, like, just got Will & Grace. So yeah, it’s gonna be a conversation.”