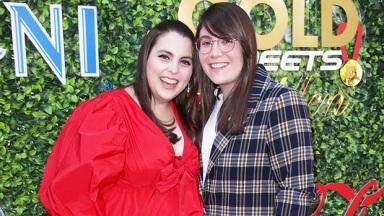 
Beanie Feldstein has been carving her name in Hollywood for quite some time, making sure to step out of the shadow of her Oscar-nominated brother Jonah Hill. After bursting on the scene in Neighbors 2: Sorority Rising and Lady Bird, the 28-year-old Los Angeles native showed she could carry a film as a lead actress with 2019’s Booksmart, directed by Olivia Wilde.

She then went on to portray Monica Lewinsky in the third season of the FX anthology series American Crime Story: Impeachment in 2021. Following her critically praised performance, Beanie took on Broadway again — she starred in the 2017 revival of Hello Dolly — and made another huge impression as Fanny Brice in Funny Girl. Next up will be the film adaptation of Stephen Sondheim’s musical Merrily We Roll Along, directed by Richard Linklater, with Beanie playing Mary Flynn.

In her personal life, things are going just as swimmingly for the young starlet, as she announced she got engaged to her girlfriend Bonnie Chance-Roberts on June 23, 2022! Keep reading to find out all about the woman who stole Beanie’s heart, below!

1. Bonnie is a British producer

Beanie met Bonnie in the United Kingdom when they were working together on the film How to Build A Girl. Bonnie, who was born in Liverpool and graduated from Birmingham University, was a producer on the movie.

For Beanie, dating a woman was new to her when she met Bonnie, but the actress said falling in love with the producer wasn’t about gender. “Not to sound flippant, but I was in love with her and all of her, and she’s a woman,” Beanie told Teen Vogue. “That’s not scaring me or deterring me. And it wasn’t just women in general; it was her specifically.”

Solange’s Son: Everything To Know About Her 17-Year-Old, Daniel

In 2019, she revealed the couple had hit it off immediately. “We just spent every day together,” Beanie said on Dax Shepard’s podcast Armchair Expert about what happened after they first went out on a date. “It was like, let’s have breakfast at 9 a.m. and then it would be 11 p.m. and we would be like, ‘I guess it’s not breakfast anymore and we’re still staring at each other and talking.’”

Speaking with Teen Vogue, Beanie also said that falling in love with Bonnie made her realize why “people write songs” about romances. As for falling in love with a woman and identifying as queer, Beanie told People, “For me in my life, it is a part of who I am but it is not at all my defining feature. It doesn’t mean I don’t love my girlfriend, it’s just part of who I am

4. Beanie called Bonnie the ‘best thing’ to happen to her

Bonnie’s birthday a year prior had Beanie gushing, “happy 30th birthday to the most remarkable human ever to exist. i’m pretty convinced you’re actually made of magic. the girl with the warmest heart, the most expansive imagination and the most exceptional brain. i love you so much. happy birthday, bubba!!!”

5. Bonnie got down on one knee to propose

Beanie took to her Instagram on June 23, 2022 to tell her 600k followers she got engaged to Bonnie. In the adorable photo album Beanie shared — which was captioned “i do, bon” — Bonnie can be seen kneeling on one knee as she holds out the engagement ring to Beanie, who looks completely overjoyed. In a subsequent snap, Beanie also gets down on one knee to propose. The rest of the post has several photographs of their family and friends celebrating the amazing news, including Beanie’s bro Jonah.