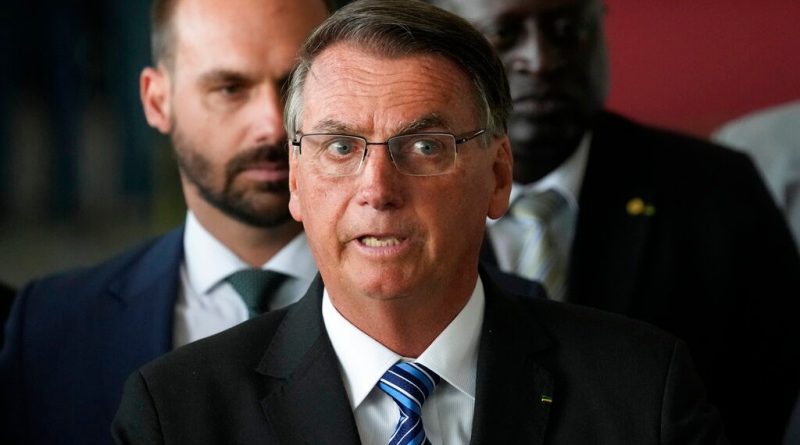 
Brazilian President Jair Bolsonaro on Tuesday did not concede the election he lost to leftist Lula da Silva in a brief speech that marked his first comments since results were released two days ago.

But afterward, Chief-of-Staff Ciro Nogueira told reporters that Bolsonaro has authorized him to begin the transition process.

Bolsonaro’s address didn’t mention election results, but he said he will continue to follow the rules of the nation’s constitution.

“I have always been labeled as anti-democratic and, unlike my accusers, I have always played within the four lines of the constitution,” Bolsonaro, flanked by more than a dozen ministers and allies, told reporters in the official residence.

Bolsonaro lost Sunday’s race by a thin margin, garnering 49.1% of the vote to da Silva’s 50.9%, according to the nation’s electoral authority. It was the tightest presidential race since Brazil’s return to democracy in 1985 and marks the first time Bolsonaro has lost an election in his 34-year political career, including seven races for a seat in Congress’ Lower House.

Much like former U.S. President Donald Trump, whom Bolsonaro openly admires, the far-right incumbent has repeatedly questioned the reliability of the country’s electoral system, claiming electronic voting machines are prone to fraud. He never provided any proof, even when ordered to do so by the electoral court.

Read More: How Lula Won the Most Crucial Election in Brazil for Decades

That has led many political analysts to warn that Bolsonaro appeared to be laying the groundwork to reject election results.

In recent days, and without a public statement from Bolsonaro, truck drivers and other supporters of his blocked hundreds of roads across the country. Many said the election had been fraudulent and some called for military intervention and for Congress and the Supreme Court to be disbanded.

A majority of the court’s justices backed the decision, which accuses the highway police of “omission and inertia.” Failure to comply will mean its director can be fined up to 100,000 reais (more than $19,000) per hour, be removed from his duties and even face arrest. Federal prosecutors in Sao Paulo and Goias states said they had opened investigations into the blockades.

By noon Tuesday, highway police said they had removed 306 blockades, but more than 260 were still in place.

“There is no doubt that, even though he might not be directly responsible for these actions, everything he has done as president stoked this, especially questioning the electoral process and the ballots,” said Williams Gonçalves, a political science professor at the Federal University of Rio de Janeiro.

“Bolsonaro is completely isolated. Everyone responsible for other institutions has already recognized the election’s results,” Gonçalves said.

In Sao Paulo — Brazil’s most populous state and largest economy — traffic jams around the international airport led to dozens of flight cancellations, with videos on social media showing travelers rolling their suitcases along the highway in the dark trying to catch their flights. The highways had been cleared by Tuesday morning, but airport officials said access remained difficult as traffic was still backed up in and out of the airport.

There, Dalmir Almeida, a 38-year-old protester, told The Associated Press that after completing three days of strikes, he and others will drive their trucks to the military barracks to ask for their support. “The army will be in our favor,” he added.

Read More: Lula’s Victory in the Brazil Elections Is a Win for the Planet

At another road block in Sao Paulo state, protesters set tires on fire. Several demonstrators were wrapped in the Brazilian flag, which has been co-opted by the nation’s conservative movement for demonstrations. Huge lines of cars could be seen snaking along the highway.

Fears of escalation grew as the country’s leftist Landless Workers’ Movement, a key ally of da Silva’s that has long staged occupations of what it considers vacant or unused lands, asked its militants on Tuesday to organize demonstrations in several states to unblock roads.

Sao Paulo Gov. Rodrigo Garcia told a news conference that the time for negotiations was over, and he was not ruling out the use of force by law enforcement.

“From now on, we are going to apply what the (Supreme Court) decision determined, starting with fines of 100,000 reais per hour for each vehicle that is contributing to this obstruction,” he said.

In Minas Gerais, a key battleground state in the election, a video on social media showed a protester telling a reporter from the O Tempo news outlet that the election was “fraudulent” and warned of future protests. “We won’t stop as long as we don’t have a response from our president,” he said. “We want Bolsonaro in 2023 and for the years to come.”

In Itaborai, a region in Rio de Janeiro state, an Associated Press reporter saw truck drivers kneeling in front of police officers and refusing to evacuate.

Users on social media, including in multiple Telegram and WhatsApp chat groups with names like “Paralysation,” shared demands that the military take the streets, or that Congress and the Supreme Court be disbanded and the president remain in office.

Following the election, the electoral authority blocked two dozen Telegram groups that defended a military coup and called on their more than 150,000 followers to organize demonstrations, according to online news site UOL.

The Supreme Court’s decision on Tuesday permits regular state police forces to reinforce federal highway police, and the governors of Rio de Janeiro and Sao Paulo states ordered them to deploy, news outlets reported. The same was done in 2018, when an 11-day trucker strike brought Brazil to a halt.

Bolsonaro commands wide support from the police forces’ rank and file, however, and it wasn’t clear how effective their involvement would be. Da Silva’s Workers’ Party had accused Bolsonaro’s campaign of deploying law enforcement to create traffic jams and deter people from voting on Election Day, and video footage shared on social media showed officials stopping buses.

Read More: ‘Viva Lula’: How Global Leaders Are Reacting to the News of da Silva’s Election Victory in Brazil

Alexandre de Moraes, who presides over the the nation’s electoral authority, said police checkpoints delayed voters, but didn’t stop them from reaching the polls.

The 2018 stoppage caused food prices to spike and left supermarket shelves without products as gas stations ran out of fuel. It caused billions in losses and revealed the vast power that truckers possess, particularly when they organize through social media platforms.

Bolsonaro, a lawmaker at the time and months away from winning that year’s presidential election, was an outspoken supporter of the truckers, who are now among his constituents. This year, his administration limited interstate fuel taxes to help bring down prices and launched a financial aid program for truckers just months before the election.

On Tuesday, dozens of journalists from both national and international news outlets remained camped outside the presidential residence in the capital, Brasilia, awaiting any sign that Bolsonaro might speak about the election or the highway blockades.

“Bolsonaro’s strategy here, so far as there is one, seems to be strategic ambiguity,” said Robert Muggah, co-founder of Igarapé Institute, a Rio de Janeiro-based think tank focused on security. “He’s focused on the street, and if chaos ensues so much the better. There is a real risk that police inaction could ignite simmering tensions.”