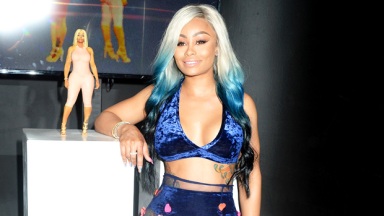 
Blac Chyna turned up the heat in her latest Instagram post, in which she rocked a bright pink triangle bikini top. She matched her bikini with pink streaks throughout her hair, which was styled in a super tall updo. She accessorized with large silver hoop earrings and had a full face of makeup on. She simply captioned the post with heart emojis.

The sultry shot came less than two weeks after the 34-year-old reality star was photographed running through some water with Dream Kardashian, 5, who she shares with ex Rob Kardashian, 35. Dream looked adorable in a floral-printed one-piece and had her curly hair pulled up into a ponytail. Chyna, on the other hand, rocked a black and white cow print swimsuit, which she paired with a sheer black wraparound skirt. The mother-daughter duo appeared to be having a blast as they frolicked through the small waves crashing on the shore.

The mother of two looked recovered from her Celebrity Boxing Match against Alysia Magen in mid-June. The match ended in a tie, which both opponents were reportedly unhappy about.

The match came shortly after Chyna lost her defamation lawsuit against the Kardashian family, who Chyna was suing for allegedly getting her and Rob’s former television show, Rob & Chyna, canceled by defaming her, and consequently affecting her family’s wellbeing by making her lose steady income. Chyna, of course, was not pleased with the outcome and attempted to have the judge presiding over the case dismissed because she felt the judge had pre-existing motives against her. However, by June 20, Chyna and Rob reached an agreement to have Chyna’s appeal dropped.

Since then, Chyna has kept quite busy promoting her business ventures, including her line of eyelash extensions and her music career. On July 2, Chyna posed in an orange one-piece to promote her new single “Can’t See Me”. The same day, she shared a link to her website, which links out to her music, her swimsuit collection, and her OnlyFans account. It seems that Chyna has moved on from her legal woes with the Kardashians and is focusing on helping her businesses thrive.