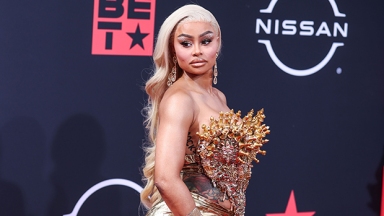 The celeb, born Angela Renée White, explained her beauty philosphy in her caption, writing, “Anyone can be confident with a full head of hair. But a confident bald woman – there’s your diamond in the rough.” The audio, by user maariamaria, echoes the idea in some NSFW terms.

She definitely didn’t seem self-conscious in the video, where she pouted and posed. Blac Chyna showed off her makeover wearing a tawny corset-style dress which highlighted her cleavage and curves. Wiggling around in the clip, she was able to give fans a look at her every angle.

Interestingly, she appeared to sport a gold Dolce & Gabbana monogram choker. Just days before, rival Kim Kardashian put on a blockbuster fashion show with the brand.

Though her outfit was undeniably sexy, BC’s face was the star of the show. She was glowing, with smooth, dewy skin and a sunny-kissed wash of bronzer across her cheekbones. The mother-of-two’s brows and eyelashes were perfectly on point, and she puckered up to the cameras with a big, juicy pout. Proving her own best advertisement, the stunner tagged her makeup brand Lashed Cosmetics in the post.

Blac Chyna has experimented with so many different hairstyles over the years, but has never embraced the bald look before. She’s sported everything from pink to blue to platinum blonde since stepping into the spotlight.

Chyna has been busy since losing her defamation lawsuit against the Kardashian family.  She accused the family of lying about the star in order to get her and Rob’s reality show cancelled, consequently depriving Chyna’s family of income.

The star was not pleased with the outcome and attempted to have the judge presiding over the case dismissed because she felt the judge had pre-existing motives against her. However, by June 20, Chyna and Rob reached an agreement to have Chyna’s appeal dropped.