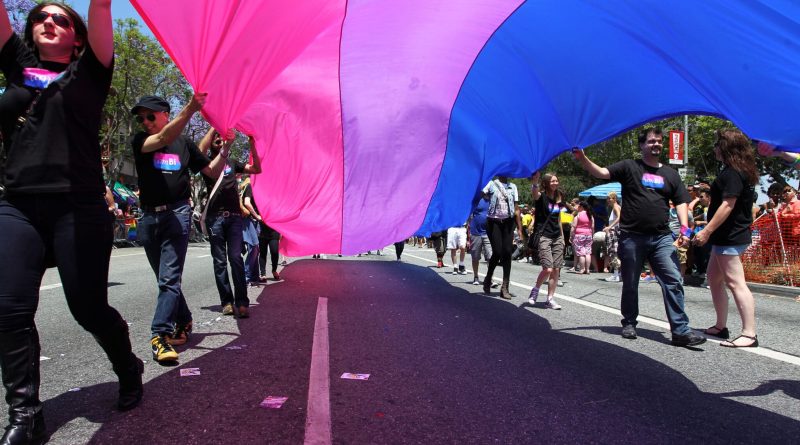 Homophobic and transphobic comments have finally started to be taken seriously for the damage that they cause.

Many jokes that would have been considered mainstream only 10 years ago are now, rightly, considered unacceptable. This has lead to a lot of outrage-click headlines about “cancel culture”, but sometimes it’s just plain old consequences, such as the time Kevin Hart was forced to exit the Oscars after his old homophobic tweets were rediscovered

This is not to say that anti-gay sentiments – and anti-trans rhetoric, especially – are no longer issues in public life. Stories like Kevin Hart’s are still in the minority. JK Rowling’s ongoing, public spiral into Britain’s obsessive anti-trans rights movement has had little effect on her fame and fortune. But within progressive and queer circles, transphobia and homophobia are being called out and addressed, or at least discussed. So why is intolerance towards biphobia lagging behind?

Earlier this week, which happens to be Bi Awareness Week, Labour MP Rosie Duffield was asked about liking at tweet which criticised the “reclaiming” of the word queer and called trans people “heterosexuals cosplaying as the opposite sex” (an incident that prompted an ongoing Labour investigation). In response, Duffield claimed that “many of her gay friends” are offended by “men… who are married to women, who call themselves the ‘q’ word, and appropriate gay culture in a way that is deeply offensive to a lot in the gay rights movement”.

Comments like these invalidate the identity of bi/pan/queer men in different-gender relationships. But even within the queer community, biphobic jokes and remarks are still frequent and mostly pass without recourse. For example, comedian Rachel Mccartney has made openly biphobic comments on a number of occasions. This included once tweeting, in response to accusations that Jeffrey Epstein’s ex-girlfriend and alleged co-conspirator Ghislaine Maxwell abused underage girls: “Dating a 60-year-old man and raping 15-year-old girls is bi culture.” (For context, bi women face high rates of sexual violence than gay and straight women.)

Absolutely mind blown by these now deleted tweets. What a hot take this is. pic.twitter.com/tfRjd8jTlp

In 2017, Stonewall found that a third of teenagers “frequently” or “often” hear negative comments about bi people (biphobic language), for example, that bi people are “greedy” or “just going through a phase”. On top of this, a 2014 study examining online discussions about bisexuality in an LGBT+ environment discovered that 55 per cent of the comments contained some form (or evidence) of biphobia or monosexism.

Despite the prevalence of biphobia, it’s common to read or hear comments about bisexual people having privilege or not facing any real oppression. But this is provably false: it is well documented that bi people face higher rates of mental illness, due in part to biphobia and double discrimination. Bi+ men are less likely to get tested for HIV due to social stigma and biphobia within healthcare settings. Bi+ people are also more likely to suffer from addiction or abuse drugs and alcohol. Yet bi people are still seen as deserving targets of cruel jokes or comments. We are seen as being able to opt out of our oppression, or that we bring it on ourselves by being greedy.

Taking biphobia seriously would mean re-examining the “born this way” argument. As activist and lawyer Heron Greensmith wrote earlier this year: “The problem is that many LGBTQ2S+ activists invested far too much in an argument that is both false and a dead end: Queerness isn’t immutable for all of us. Queerness can be beautifully fluid.” It would also mean challenging the idea that being greedy or self-indulgent aren’t character flaws. Writer Maz Hedgehog points out how this overlaps with another type of prejudice that progressive spaces are yet to reckon with: fatphobia. She writes: “Fatness and bisexuality become spectres, signs of defect or incompleteness or immaturity to be feared and rejected. They become temporary categories which must be disciplined into maturity and coherence, lest the whole edifice falls apart.”

Biphobia need to be taken as seriously as any other kind of prejudice or discrimination. We know biphobia is real, we have decades worth of evidence of the harm that it causes. If we can’t tackle this within the queer community, how are we supposed to do so in mainstream society? The answer is not to try and convince people that biphobia is real, it is. It’s to start reacting to it in the same way we do with other types of bigotry: report it, call it out and make it clear that it’s unacceptable.

Lois Shearing is the author of the Bi the Way: The Bisexual Guide to Life