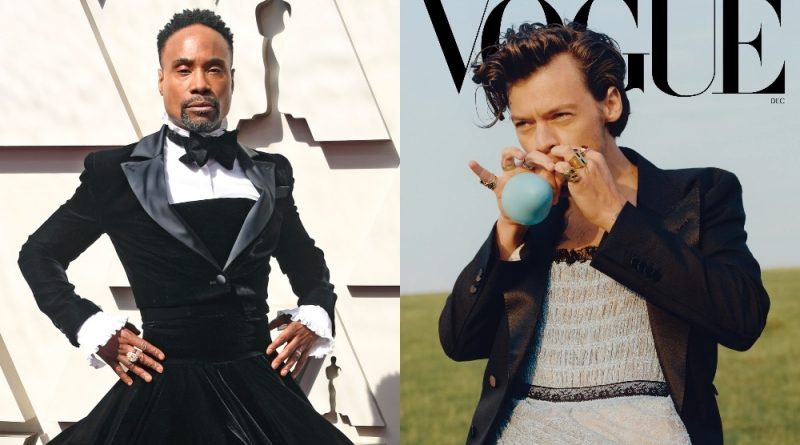 Billy Porter has called out American Vogue for choosing to feature Harry Styles as its first male to wear a dress on its front cover.

The 52-year-old Pose icon told The Sunday Times that he is in no way “dragging” the 27-year-old, but simply feels the One Direction singer hasn’t put in the work when it comes to rallying against gender expectations the same way he has.

“I. Personally. Changed. The. Whole. Game. And that is not ego, that is just fact,” he said to the British newspaper.

“I feel like the fashion industry has accepted me because they have to. I’m not necessarily convinced and here is why.

“I was the first one doing it and now everybody is doing it. I created the conversation and yet Vogue still put Harry Styles, a straight white man, in a dress on their cover for the first time.”

Billy Porter: ‘I am not dragging Harry Styles’

“I’m not dragging Harry Styles,” Billy Porter added, “but he is the one you’re going to try and use to represent this new conversation? He doesn’t care, he’s just doing it because it’s the thing to do.

“This is politics for me. This is my life. I had to fight my entire life to get to the place where I would wear a dress to the Oscars and not be gunned down.

“All he has to do is be white and straight.”

It’s an about-turn from Porter’s initial response to Styles’ December 2019 cover, which saw the My Policeman star throw on a lacy dress with a tuxedo jacket, both by Gucci.

“I am seeing change,” Porter told the press in May on the BRIT Awards red carpet. “You know, Harry Styles on the cover of Vogue magazine is change. You’re welcome!”

“I am seeing change. You know, Harry Styles on the cover of Vogue Magazine is change. You’re welcome!”

While in an Instagram post, Porter weighed in on the inevitable drama that Styles donning a dress caused among conservative commentators, who said the photographs show why “manly men” are under attack. Yes, really.

“Just be who you wanna be,” Porter wrote in the caption in response, “never let ’em tell you who you ought to be.

“Just be with dignity. Celebrate yourself triumphantly,” he said, adding a slew of hashtags about “manly men” and tagging Styles.

Styles has never publicly labelled his sexuality but has long been a tireless LGBT+ advocate. He told Vogue for his cover spread that he has never felt “limited” to men’s clothing.

“I’ll put on something that feels really flamboyant, and I don’t feel crazy wearing it,” he said at the time.

“I think if you get something that you feel amazing in, it’s like a superhero outfit. Clothes are there to have fun with and experiment with and play with.”