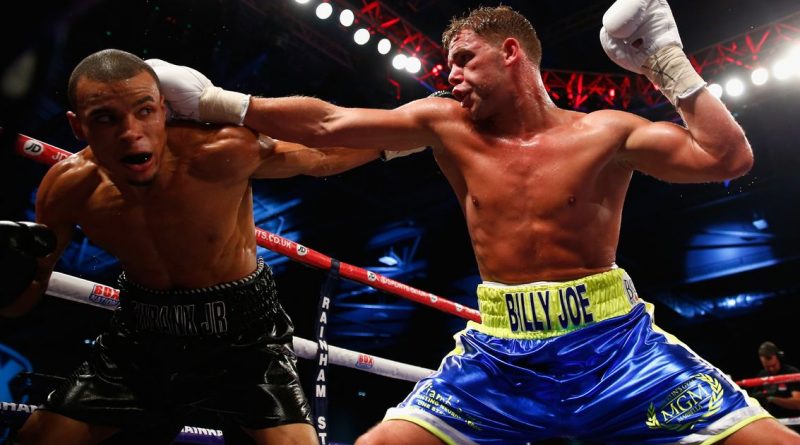 
Saunders hasn’t fought since suffering a fractured orbital during his defeat to Canelo Alvarez, and has admitted that it would take an offer of £5 million for him to fight Eubank Jr in a rematch

The pair fought in an eliminator for the WBO middleweight world title in 2014 with Saunders prevailing by split-decision and earning a world title shot against Andy Lee whom he later conquered to become world champion.

Saunders has been out of action since he was pulled out of his unification clash with pound-for-pound No.1 Canelo Alvarez.

But he has promised to re-visit a domestic showdown with Eubank Jr if his demands are met.

“5m and I will come back and spank you once again, man down.” Saunders posted on Twitter.

Saunders enjoyed a tremendous career up until his loss to Alvarez, defeating the likes of John Ryder and David Lemieux during his rise to world champion.

But he has previously admitted that retirement is a consideration after suffering a horror injury, and any potential return fight must be the “right fight”.

“At the end of the day, I’m 31 years old, if I don’t ever wanna work again, wanna sit back, wanna chill, I can do that,” Saunders told talkSPORT. “And so it should be, I’ve put a lot of time into boxing and I’ve paid my dues. The sport’s been very, very good to me…

“I’m 31, I haven’t took no punishment, I haven’t been battered from pillar to post, brain dead and can’t put a sentence together, so I need to sit back and look at my options.

“Because the options have to weigh up – the thought of me just coming in and fighting for a world rating or something, belts don’t feed the kids.

“Everything would have to stack up and [be] the right fight.”

And the 31-year-old believes his team made the right decision, despite his initial insistence that he would go back out and continue the later rounds.

“I’m there to go on all night. When we step in that ring, that’s our lives and I’m willing to put down the life,” Saunders continued. “But never in my life would I ever say, ‘Nah, I’m finished, I’m done.’

“I boxed a minute and 20 seconds with a broken eye socket, a broken cheekbone in three places.

“A minute and 20 seconds is alright fighting the average man, but when you’re fighting the best man on the planet, I could’ve easily opted out but I never.

“That was the cornerman’s decision. It is what it is, I can’t argue with that.”

His opponent Eubank Jr has recently been stripped of his WBA middleweight belt, after the governing body sanctioned a belt “clear-up” removing the interim titles.

And the middleweight will be returning to action when he takes on Sven Elbir in October as part of BOXXER’S new partnership with Sky Sports.