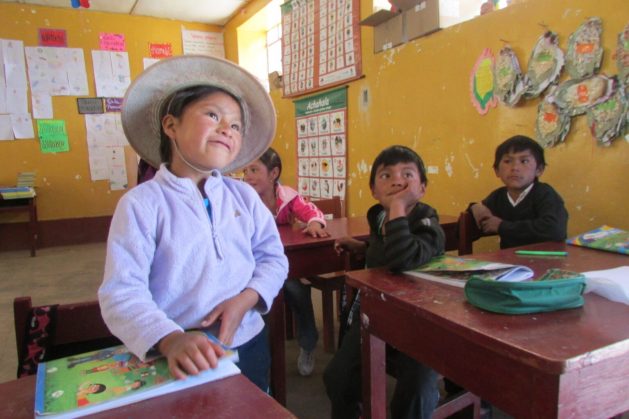 LIMA, Jun 16 (IPS) – “I always express myself in Quechua and I don’t feel I’m less of a person,” said Elías Ccollatupa, 47, who has been a bilingual intercultural teacher for more than two decades in the Chinchaypujio district, one of the nine that make up the province of Anta, in the department of Cuzco, in the southern Andean region of Peru.

Ccollatupa spoke to IPS by telephone from his Quechua farming community of Pauccarccoto, which is in the district of Chinchaypujio, while the laughter of children at recess resounded in the background. According to official figures, they are part of the 1,239,389 students receiving intercultural bilingual education in this South American country.

A teacher for 21 years, he expressed his concern about the government’s intention to relax the current policy that guarantees the right to intercultural bilingual education, i.e., that learning takes place respecting the student’s native language and cultural identity.

Peru approved the Bilingual Intercultural Education Sector Policy in 2016 and although implementation has been patchy, Ccollatupa, a member of the Tarea (Task) Educational Publications Association, said the existence of this regulatory framework is important.

“This way we ensure that our native languages do not disappear from the map and that our cultures remain alive,” he said.

In the middle of the 20th century, the Peruvian government began to adopt policies to guarantee the right to bilingual education for the indigenous population, within the framework of international mandates, but without putting a priority on their implementation.

The persistent demand of indigenous peoples’ organizations, other non-governmental organizations and the Ombudsman’s Office contributed to the institutionalization of these policies and to an increased budget until the National Intercultural Bilingual Education Plan was approved in 2016, after consultation with indigenous peoples.

The Plan, which includes the Sector Policy, is a five-year plan that officially expired in 2021, but will remain in effect until it is replaced.

At the national level, there are almost 27,000 schools authorized to provide bilingual early childhood, primary and secondary education in the 48 languages of Peru’s native peoples, where the teaching staff must demonstrate that they master the local language. As of February 2022, the Ministry of Education had filled 61 percent of the 44,146 bilingual teaching positions.

The alarm bells rang in January, at the beginning of the school year, when a directive of the General Directorate of Alternative Basic Education, Intercultural Bilingual and Educational Services in Rural Areas, under the Ministry of Education, requested the list of schools where there was a shortage of bilingual teachers in order to reclassify the schools, to make it possible to hire teachers who only speak Spanish.

A remnant of colonialism

The Interethnic Association for the Development of the Peruvian Jungle (Aidesep), which represents the indigenous peoples of the country’s Amazon region, issued a statement against what it described as a “policy of annihilation” of intercultural bilingual schools.

Alfredo Rodríguez, an advisor to Aidesep’s steering committee on the issue, criticized government officials for putting the right to work of non-bilingual (non-indigenous) teachers above the right of indigenous children to be educated in their mother tongue.

In an interview with IPS in Lima, he mentioned the case of the Urarina native communities, located in the Chambira river basin in the Amazonian department of Loreto, in the extreme north of the country. Twenty teaching positions were awarded there this year to monolingual Spanish-speaking teachers, even though the children at the schools in the area speak their mother tongue, Urarina.

“This is part of the colonial mentality in the minds of those people. They want to force everyone to speak only Spanish because they believe that indigenous languages are dialects without cultural importance and that the backwardness of Peru is due to diversity, that we must homogenize everyone,” said Rodriguez.

He asserted that the authorities’ lack of respect for and appreciation of the country’s cultural and linguistic diversity was part of the “political system” of the “criollos” (descendants of the Spanish colonizers).

He said that attitude was shared by President Pedro Castillo, who describes himself as a rural – but not indigenous – teacher of peasant farmer origins, who taught in villages in the northern department of Cajamarca and was a trade unionist, before entering politics.

“Those who believed that Pedro Castillo was an Indian were mistaken and today, in the educational administration, they are moving towards ethnocide, the annihilation of indigenous civilizations and cultures,” Rodríguez said.

In Peru, a country of more than 32 million inhabitants, almost a quarter of the population aged 12 and over self-identifies as Amazonian or Andean indigenous people. According to the National Institute of Statistics and Informatics, there are 5,771,885 indigenous people in the country.

The Aidesep advisor argued that the right to intercultural bilingual education needs to be reinforced in order to reduce the inequalities affecting indigenous children and adolescents.

He referred, for example, to the fact that 94 percent of teachers in this area do not have teaching degrees, as documented by the Ombudsman’s Office. “The Ministry of Education does nothing about this. There are intercultural universities in name only, without economic resources due to the 500 years of neglect of these populations,” Rodríguez complained.

“It is valuable for children to learn in their mother tongue and then move on to a second language. Their cognitive structure is formed in the first five years of life and has to be strengthened in early and primary education. Teaching in the mother tongue boosts children’s intellectual development and when they learn the second language they do very well,” he added.

However, he considered that due to the lack of attention from the State, the current scenario is that they do not learn their mother tongue well and they learn Spanish in a distorted fashion, which is reflected in their writing and reading skills.

This situation reinforces discrimination and racism. Rodriguez explained that indigenous adolescents drop out of school or lose out on scholarships in universities because of the shortcomings of a secondary education provided by inadequately trained teachers.

Aidesep has submitted a set of proposals to the government.

These include not changing the classification of the institutions that provide intercultural bilingual education services, and implementing special training programs for indigenous teachers.

In addition, they propose the creation of a curriculum reform commission to design content appropriate to native peoples in accordance with Convention 169 of the International Labor Organization (ILO), which refers to the rights of indigenous and tribal peoples.

According to the last National Population Census of 2017, 40.5 percent of the population that self-identified as indigenous or native in the Andean and Amazon regions had partial or complete secondary education, in a country with 55 officially recognized native peoples.

Raising awareness among families and communities

Teacher Elías Ccollatupa was trained in intercultural bilingual education, as was his wife. Their mother tongue is Quechua and they taught the language to their son and two daughters, who he said “are proud to speak it.”

As a teacher and now as head of Chinchaypujio’s intercultural bilingual education network, he maintains a strong commitment to the right of children to be educated in their mother tongue. He is in charge of six schools from first to sixth grade, each with an average of 12 students.

“I see with concern that in the primary grades of six, seven, eight years old they only want to be taught in Spanish, and that’s because they are children of young mothers and fathers who left the community and have the idea that Quechua is no longer useful,” Ccollatupa said.

It is a kind of language discrimination, he added, a question of social status, as if people who spoke Spanish were superior to those who spoke their native language. “But when it is explained to them, they understand; it’s a question of raising awareness among the families and the authorities: Spanish is important, I tell them, but that does not mean you have to leave Quechua aside,” Ccollatupa said.

He proposed the incorporation of a component of awareness-raising and coordination with the educational community in each territory where intercultural bilingual education is provided, a task that, although it should be the responsibility of the teachers, is not being adequately carried out due to lack of time.

Ccollatupa also raised the need to understand the educational service from a cultural point of view in order to learn about the experiences in each locality where teachers work. To this end, he remarked, it is important to establish alliances with the community’s elders and to address the question of local knowledge with them and create connections with other kinds of knowledge.