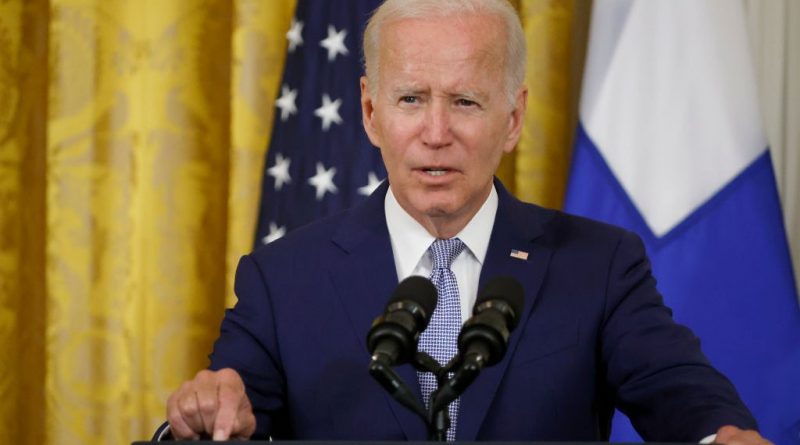 
The U.S. National Security Strategy (NSS) of 2022, recently issued by the Biden administration but in practice a product of the bipartisan establishment, is a strangely fearful document. Most of it is devoted to the dire threats to the U.S. and allied position in the world supposedly represented by Russia and China (with the occasional glance at Iran and North Korea).

And yet the NSS misses what ought to be a blindingly obvious fact: that if the U.S. stands on the defensive on the basis of its existing alliance systems (as it did with great success in Europe during the Cold War), America’s political and military position in the most important parts of the world is not just strong, it is virtually unassailable by any outside power. Grave dangers to the U.S.-led democratic West do exist, but they are mainly internal to our societies, or consequent on climate change, an issue which—although described as a “potentially existential threat”—is shockingly and entirely downplayed by the NSS.

The basis of the tremendous strength of the U.S. position lies in American military power in alliance with local states that are themselves economically and politically strong; while Russian and Chinese alliance systems are weak by comparison. As long as these U.S. alliances remain in place, America cannot be expelled from Europe or the Far East except by direct and totally successful military aggression against these countries—something that any rival cannot hope to achieve and would be suicidal to attempt.

To begin with Europe: NATO and the European Union between them now include all the significant countries on the continent of Europe except for Russia and Ukraine—and Ukraine is by now also to all intents and purposes a U.S. ally. U.S. and allied forces in Europe are entirely capable of defending NATO against Russia. A Russian nuclear threat does exist as a result of the war in Ukraine; but the Russian army has demonstrated conclusively that it is simply not capable of attacking NATO with any prospect of success. Can Russian troops that failed to capture Ukrainian cities 20 miles from the Russian border threaten Warsaw, let alone Berlin? No.

It is sometimes argued that if a ceasefire is reached in Ukraine, the Russian government could successfully rebuild its forces to conquer the whole of Ukraine, or even threaten NATO; but this begs two obvious questions: The first is what we in the West would be doing while Russia is rebuilding its forces? Would we not be building up the Ukrainian forces, and strengthening our own? And this being so, why would a Russian government think that a second war would stand any better chances than the first?

On what basis is Russia supposed to create such formidable forces: It has a GDP barely one twentieth that of the U.S., E.U. and U.K. combined. Its young men are flooding across Russia’s borders to escape military service. Historically, there have been occasions when economically much smaller nations have defeated powerful ones; but they have done so on the social and cultural basis of ferociously motivated armed forces drawn from martial societies. Is that the picture presented by Russia and the Russian army today?

There are tremors of unease in European societies about the war in Ukraine, but they have little to do with fear of the Russian army. On the contrary, one of them stems precisely from fear of Russian military weakness: a fear that the Ukrainian army might defeat Russia so thoroughly as to threaten the reconquest of Crimea and the naval base of Sevastopol, and that to prevent this Moscow would resort to the use of tactical nuclear weapons. The other relates to energy shortages due to the cut-off of Russian gas supplies. This fear however is leading only to a desire for a ceasefire in Ukraine, not to calls for the abandonment of Ukraine, let alone submission to Russian hegemony in Europe—a ridiculous idea.

Read More: Why Protecting Taiwan Really Matters to the U.S.

American fears concerning U.S. alliance systems have always centered on the belief that key allies might be intimidated into abandoning them. There is however now ample historical evidence to contradict this. After all, it was not the case during the Cold War, when huge Soviet tank armies stood in the middle of Germany. Even at the start of the Russian invasion of Ukraine, when the general prediction of Western military experts was that Russia would win a quick and overwhelming victory, the result was to strengthen NATO.

In East Asia, the U.S. alliance system is not as strong and all-encompassing as in Europe; but it is quite strong enough to render absurd the idea of China expelling America from the region. As long as Japan, South Korea, and Australia remain U.S. allies with U.S. bases on their territory (plus of course America’s own island of Guam), that outcome simply cannot happen. For Beijing to invade Japan or Australia, or credibly threaten to do so, China would have first completely to eliminate the U.S. and Japanese navies, virtually ensuring in the process its own annihilation in a nuclear war.

Outside East Asia, China remains both much weaker and much more cautious than much U.S. commentary suggests. Like Russia in Europe, China has no strong and reliable allies in the region. China has one small naval base (at Djibouti) in the Indian Ocean. The United States has several giant ones, as well as a military partnership with India. There is no sign as yet of any Chinese moves to turn its commercial ports in the region (the so-called “String of Pearls”) into naval bases. Indeed, from a purely military point of view, it would be foolish to do so. Such bases, and any Chinese naval units in the Indian Ocean, could not be reinforced from China and would be hopelessly vulnerable to U.S. and Indian forces in the event of war.

Nor has China sought to imitate the Soviet Union and Russia by exploiting U.S. difficulties in the Middle East—if only because, as a Chinese diplomat once told me, China has learned from U.S. experience the dangers of embroiling itself in what he called “that mess,” which has led America into repeated disasters.

There is one great difference in military terms between the U.S. position in Europe and in East Asia: Taiwan, which, just as Russia in parts of Ukraine, China regards as part of its national territory and which is increasingly hard for America to defend. China’s growing economic strength (albeit now growing much more slowly than over the past 40 years) and armed forces make this an issue of immense military danger for America, if America commits itself to the defense of Taiwan. Unlike Japan, Australia or South Korea however, Taiwan is not a formal U.S. ally, and America is therefore not legally obligated to defend it. The United States therefore has every strategic interest in trying to reduce tension over Taiwan, and to continue by all possible means the ambiguity over Taiwan’s status that has maintained peace in recent generations.

It is also vital to recognize however that although a Chinese invasion of Taiwan, like the Russian invasion of Ukraine, would be a gross crime against humanity and international legality, it would probably strengthen, not weaken, the U.S. position and U.S. alliance system in Asia. To believe that as a result, Japan and Australia would submit to Chinese hegemony and expel U.S. bases is fundamentally—and insultingly—to misread the national histories and characters of these countries (and of Vietnam and India, too).

The facts I have presented about the strengths of a U.S. defensive position vis a vis Russia and China cannot be seriously contested on the basis of objective evidence. What then explains the mood of anxiety that permeates the NSS 2022, and so much of the public debate in the U.S. security establishment? Is it due to the (dangerous but in itself partly legitimate) tendency of security establishments to plan for worst case scenarios? Or the influence of the military-industrial complex and foreign lobbies in Washington?

Read More: Think the Energy Crisis Is Bad? Wait Until Next Winter

All of these play their part, but in the end, the basic question to ask is: What exactly is the U.S. foreign and security establishment setting out to defend? This cannot very well be the U.S. alliance systems as they existed in 1988 or even in 2004, after the East European and Baltic States were admitted to NATO, since, as I have pointed out, these allies in themselves are secure against attack.

Without ever admitting this to the American people, or even in many individual cases to itself, the U.S. foreign and security establishment has come to accept as its basic position the “Wolfowitz Doctrine” of 1992, set out in the official memo on forward defense planning written by Paul Wolfowitz and “Scooter” Libby for George H.W. Bush’s administration. It may be remembered by the way that at the time, that memo, when leaked, was disowned by the then U.S. administration after it was generally criticized for unrealistic and megalomaniac ambition.

For the “Wolfowitz Doctrine” sets out as the fundamental goal of U.S. strategy permanent American primacy, not only in the world as a whole, but in every region of the world. The only influence that other states will possess beyond their own borders will be that permitted by the U.S. Domestic policies and systems too will have to be shaped according to U.S. wishes.

In Europe, this has led to the belief that NATO must be extended without limits into the former USSR, although a row of former U.S. diplomats, including the present director of the CIA, William Burns, warned that this would very likely lead to conflict with Russia. In Africa and the Middle East, Russian influence must be opposed even when it is being used against Islamist extremists who are the common enemies of the West and Russia.

Also in Africa, Chinese investment must be opposed even if it is strengthening the economies of faltering states whose collapse would threaten the interests of the West. In East Asia, the United States must oppose China’s claims in the South China Sea while (in the NSS) committing itself to defend Japan’s claim to the uninhabited and strategically worthless Senkaku/Diaoyu islands, even though they were previously recognized by the U.S. as part of China and are also claimed by Taiwan in its capacity as the “Republic of China.”

So it comes down to this. In the name of defending U.S.-led democratic alliance systems that are not in fact threatened, the NSS is prepared to risk the very existence of American allies, and America itself, for places that are not actually U.S. allies and for commitments that weaken, rather than strengthen, American interests and America’s position in the world. All this for the sake of a universal U.S. primacy that has never been honestly presented to the American people as the purpose for which their taxes are being paid and their lives risked. Maybe if asked a majority of Americans would say yes to this goal; but the question should be put to them honestly and clearly.