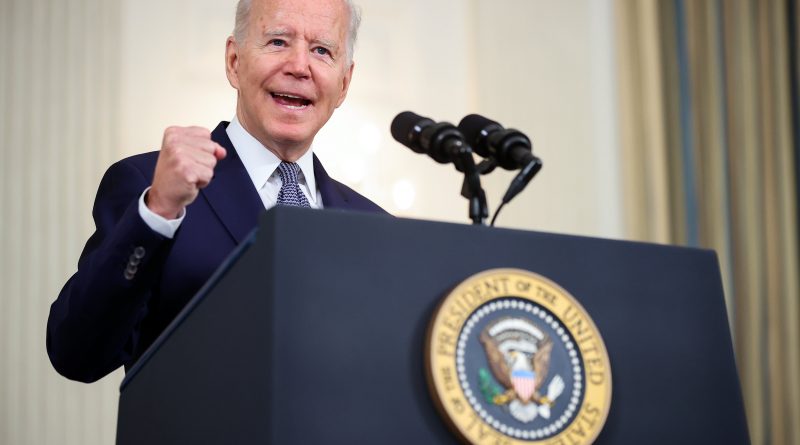 The president made his case for spending on infrastructure, climate policy and the social safety net after the Labor Department said the country added 235,000 jobs in August. The figure fell well short of the 720,000 jobs economists had expected.

Biden pinned the poor report on the highly contagious delta variant of the coronavirus and the reluctance of many eligible Americans to get a Covid-19 vaccine. He said the U.S. could boost its economy by reining in the virus and passing his two economic plans, which he said would help the middle class and make the country more resilient to the kind of extreme weather that knocked out power in New Orleans and crippled transit in New York City in recent days.

“Our country needs these investments,” Biden said. “I’m not asking for anything other than some fairness being injected into the system.”

Biden stressed he does not see the investments as a “short-term stimulus” while the country emerges from the pandemic’s shadow. He said the proposals are designed to create “long-term prosperity.”

The president’s push for his economic agenda comes a day after Sen. Joe Manchin, D-W.V., complicated his party’s plans to pass it in Congress. Manchin, whose vote Democrats will need to approve an up to $3.5 trillion budget reconciliation bill in the Senate, urged congressional leaders to “pause” consideration of the measure.

The senator, who helped to negotiate the Senate-passed bipartisan infrastructure bill, cited inflation and long-term debt as reasons for a delay. He did not rule out voting for a proposal that costs less than $3.5 trillion.

House Speaker Nancy Pelosi, D-Calif., has said she will not hold a vote on the infrastructure legislation until the Senate passes the Democrats’ spending plan. After centrists in her caucus threatened to hold up the budget bill, Pelosi made a nonbinding commitment to consider the bipartisan bill by Sept. 27.

In a Thursday Twitter post after Manchin announced his stance, Sen. Bernie Sanders, I-Vt., said the fates of the two economic plans are tied.

Pelosi and the White House hope to fully offset the spending through tax increases on the wealthy and corporations, among other measures. Democrats could also consider taxes on companies with runaway CEO pay and businesses that repurchase a substantial amount of stock, according to a discussion list circulated among Democratic lawmakers and obtained by CNBC.

Republicans have cited proposed tax hikes, and the overall $3.5 trillion price tag, in opposing the package.

Biden on Friday framed tax increases on the wealthy and corporations as a way to create a fairer economy. He repeated his pledge not to raise taxes on anyone making less than $400,000.

“To those big corporations that don’t want things to change, my message is this: It’s time for working families, the folks who built this country, to have their taxes cut,” Biden said.

“And those corporate interests doing everything they can to find allies in Congress to keep that from happening, let me be, as the old expression goes, perfectly clear: I’m going to take them on.”