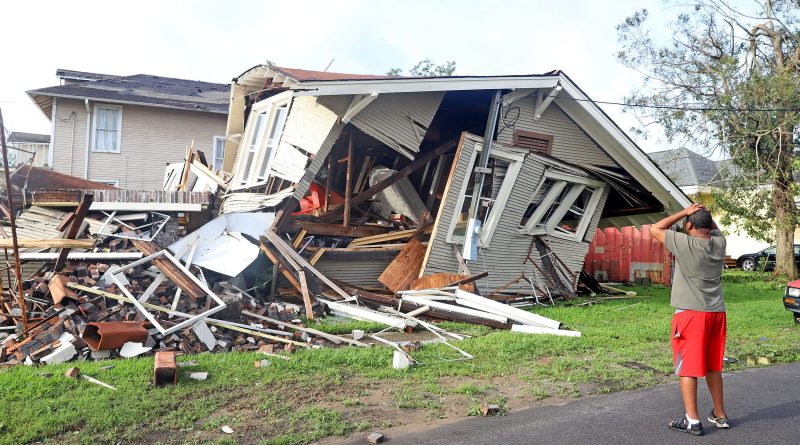 Dartanian Stovall looks at the house that collapsed with him inside during the height of Hurricane Ida in New Orleans, Louisiana, August 30, 2021.

WASHINGTON – The federal government is doing everything in its power to help Louisiana and Mississippi rescue residents and recover from Hurricane Ida, President Joe Biden told the governors of those states on Monday.

“We’re there to help you get back on your feet,” Biden said during a virtual briefing at the White House with Democratic Louisiana Gov. John Bel Edwards, Republican Mississippi Gov. Tate Reeves and others.

The hurricane made landfall Sunday as a powerful Category 4 storm, knocking out power to as many as two million people in Louisiana and Mississippi. By Monday morning, one death had already been attributed to the storm. Edwards told MSNBC he expected that number to rise considerably.

The vast federal response to the storm reinforces one of the pillars of Biden’s approach to the presidency: His belief that the government is uniquely equipped to mobilize assistance to millions of people.

“People in Louisiana and Mississippi are resilient, but it is in moments like these that we can see the power of government to meet the needs of people and respond to people, if government is prepared to respond. That is our job,” said Biden.

Five thousand National Guardsmen have been activated across the Southeast, Biden said, and more than 25,000 electrical crews and linemen from 30 states “are rolling in to support you.”

To help assess the damage to electrical lines, Biden said he had instructed the Federal Aviation Administration to work with electrical companies to deploy surveillance drones across the impacted regions.

Biden also authorized the Departments of Defense and Homeland Security to provide any satellite imagery that might help assess the damage.

In order to help more people access to cell phone service, Biden said the Federal Communications Commission would launch a cooperative framework agreement among wireless carriers, so that individuals will be able to use the roaming services of any company.

Biden was joined at the briefing by former Louisiana Rep. Cedric Richmond, who resigned from the the House in January to join the Biden administration as director of the White House Office of Public Engagement.

The president instructed the governors to reach out directly to Richmond if they needed anything from the White House.

Ida initially made landfall over Port Fourchon, Louisiana, as a Category 4 storm with winds of 150 miles per hour, one of the strongest storms to hit the region since Hurricane Katrina, which hit the area 16 years ago to the day.

Reeves and Edwards both thanked Biden for signing pre-landfall federal emergency declarations for their states, freeing up federal funding and resources to respond to the emergency.

“We’re providing any help that you’re going to need,” said Biden. “We’re going to stand with you and the people of the Gulf as long as it takes for you to recover.”

Officials downgraded Ida to a tropical storm as it made its way inland on Monday, where it was expected to bring heavy rainfall, tornadoes and the potential of severe flooding as it made its way up the Tennessee Valley and into the Mid-Atlantic later this week.

Rainfall could total 24 inches across portions of southeast Louisiana into far southern Mississippi.

This was Biden’s second meeting in four days with impacted governors: On Friday, he met virtually with Edwards, Reeve, and GOP Alabama Gov. Kay Ivey.