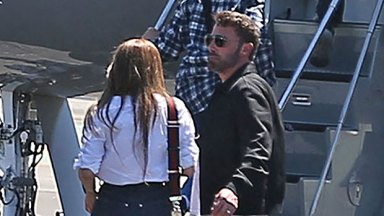 
Ben Affleck, 49, and Jennifer Lopez, 53, appeared to be getting ready to celebrate the former’s upcoming 50th birthday in an unknown location as they boarded a private jet in Los Angeles, CA. The newlyweds wore casual clothes as they made their way on the aircraft with some of their kids. At one point, the actor, whose special day is on Aug. 15,  seemed to help the singer up the steps as he put an arm out as she moved in closer to him.

Although it’s unclear exactly where the family was going, it’s sure to be a memorable place as they’re known for often visiting gorgeous cities and islands. They recently made headlines for reportedly making the decision to move back into Jennifer’s $28 million Bel-Air mansion after renovations are made in early 2023. The Selena star bought the home from actress Sela Ward back in 2016, and it’s a Mediterranean style mansion on an eight acre property that includes seven bedrooms and 13 bathrooms.

Ben and Jennifer are currently living at the $60 million home of Mariah Carey‘s ex-fiancé James Packer as they wait for their future home. Meanwhile, Ben has listed his seven bedroom, nine bathroom Pacific Palisades home for $30 million. It includes a resort-style pool and spa area and is a 13,500 sq. foot estate.

Ben and Jennifer’s living situation is just one of many big changes they’ve made since exchanging vows in Las Vegas, NV on July 16. One other change is that Jennifer changed her last name to Affleck and signed it that way in a loving newsletter that announced the marriage to her fans. The new husband and wife rekindled their flame in 2021.