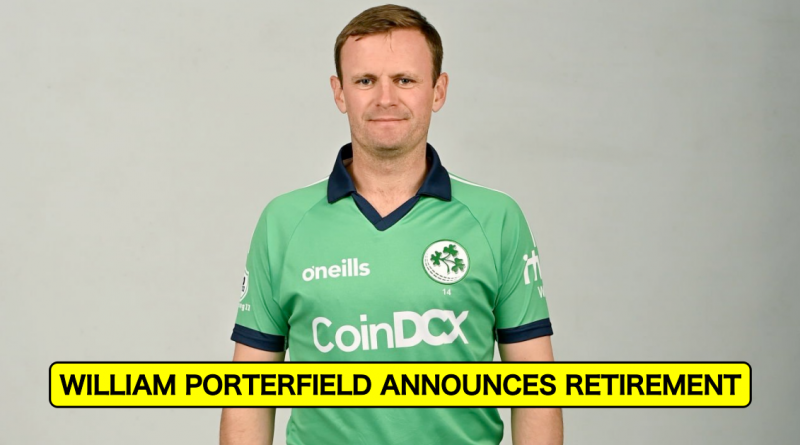 
Former Ireland captain and opener, William Porterfield announced his retirement from international and representative cricket on June 16, Thursday, after a 16-year career.

He led the country after taking over in 2008 and finished as the most-capped Irish player and the second-highest run-getter for his country. He was the captain when Ireland played its first-ever Test against Pakistan in 2018.

“It’s been an honour to represent my country for 16 years – it’s something I had always wanted to do since I was a child. I have to say, though, it’s a little surreal at the moment having made the decision to step away and retire, but I’ve been fortunate to play since 2006 and it’s been an incredible journey.”

“During my career, we’ve gone from an amateur team right through to now being a Test nation. From those before me, and along my journey, we have hopefully built an infrastructure that will allow the game in Ireland to continue to flourish. All I ever wanted to do was leave the shirt in a better place and leave the team in a better place, and hopefully, I’ve played a part in doing that,” he said.

Porterfield’s last series came against the West Indies where Ireland secured a 2-1 series win. In 148 ODIs, he scored 11 centuries but didn’t have much of a contribution in the shortest format of the game.

Porterfield had a good stint with the county side, Gloucestershire and he will now be a consultant coach for the same team till the end of the county season.

“I’ve been given the opportunity to join Gloucestershire as a Consultant Coach until the end of the season, and these opportunities don’t come around very often.”

“It’s a decision I’ve been thinking long and hard about over the last week or so – and I’d like to thank Cricket Ireland for allowing me to get up and going in the role over the last while,” he concluded.

Also Read – IND vs SA: Hardik Pandya Still Has Got Bit Of Work To Do On His Bowling – Graeme Smith