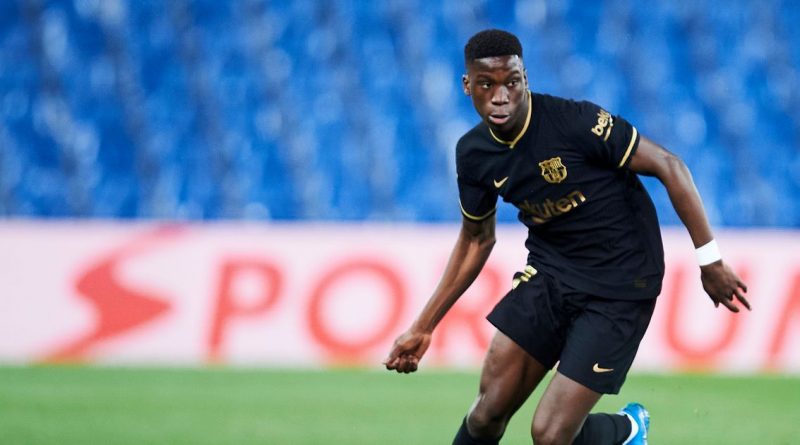 
Barcelona are hardening their stance over the future of teenage star Ilaix Moriba, who is out of contract next summer and refusing to sign the club’s offer of a new deal

Depay looking forward to playing with Messi at Barcelona

The series of events that led to Ilaix Moriba signing his first senior contract at Barcelona in early 2019 summed up the administrational and technical chaos surrounding the club.

Then aged 16, Ilaix was a star for the club’s Under-19 side and had captained multiple youth teams during his rise through Barca’s La Masia youth system – he was destined for the top level.

The Catalan giants were aware of interest from rival European clubs; Juventus, Paris Saint-Germain and multiple Premier League clubs were aware of the player’s obvious potential and were monitoring a move.

Barca had been scarred by multiple youth talents being poached in recent times: Cesc Fabregas and Gerard Pique both had to be re-signed after leaving for Arsenal and Manchester United respectively, while just two years prior defensive star Eric Garcia – now back at Camp Nou – signed for Manchester City.

The Blaugrana were intent on retaining central midfielder Ilaix, who they regarded as the standout player in their youth ranks who would be a sure-fire senior player at the club.

In this respect, they were correct – Ilaix made his senior debut for Barca in January 2021 and featured prominently in Ronald Koeman’s squad in the run-in to the 2020/21 campaign.

It could all have been so different had Barca not enjoyed a stroke of luck when negotiating the player’s new contract two years ago.

Having offered a financial package that the teenager’s representatives could not have turned down – this was at a time when the Catalan club had the highest wage bill of any sporting club – they believed the deal was a formality.

Yet a remarkable administrative error almost cost them the deal as they faxed his contract offer to city rivals Espanyol – whom, ironically, they signed Ilaix from years prior – rather than the player’s agent.

This was a cause for mild embarrassment for the club but it could have been so much worse had Espanyol not contacted Barca to inform them of their error and allow the situation to be rectified.

Senior figures at Espanyol were said to have been staggered by the financial package offered to Ilaix and it was said to be more than many established first-team players at the top-flight club.

Barca retained their player but the episode was illustrative of the carefree nature of their spending and their lack of attention to detail, which almost cost them the deal.

Two years on and the club find themselves in a different situation with the midfielder, who is now a member of the first-team squad and whose status is now significantly higher.

The 18-year-old is out of contract at Camp Nou next year and has rejected the club’s new contract offer, with negotiations now at a total standstill.

Barca have reacted to this by informing the teenager that he would not train with the senior squad or be available for selection unless he changes his stance on the contract.

This comes under the direction of club president Joan Laporta, who was elected to his position in March and is now responsible for helping to manage the club’s significant financial crisis.

The board of his predecessor Josep Maria Bartomeu oversaw the rocketing of the club’s debt – now standing at over €1.1billion – and spiralling financial situation, which was exacerbated by Covid.

Laporta told reporters on Monday regarding Ilaix’s future: “He has a year on his deal and does not want to renew with the conditions offered by the club.

“So we have to send a message.

“He is a great player but if he does not renew then there are other solutions.

“I feel bad but the club comes first.

“I ask him to reconsider and come to an agreement.

“I do not understand why he does not recognise what Barca have done for him.

“Whoever wants to leave is free to do so. With certain conditions, of course.”

The situation is clear: Barca will not bend to the will of the teenager’s representatives and if the player does not like it, then he will not be handed a new deal nor be involved with the squad.

There is a clear parallel of Laporta’s approach with that of his Real Madrid president and long-term rival Florentino Perez.

Which club will Ilaix Moriba play for next season? Comment below

Like Barca, Madrid are also having to make significant cutbacks but unlike the Catalan club, they have managed the situation and controlled their level of debt due to their unwillingness to cave into player’s demands.

This was evident during Madrid’s long-running game of poker with Sergio Ramos in the contract negotiations which eventually brought the club captain’s 16-year association with Los Blancos to a dramatic end.

Ramos wanted a two-year deal and to maintain his salary while Madrid offered only a one-year extension and a salary reduction in line with the rest of the first-team squad.

The defender believed that Madrid would eventually compromise, that they would not risk losing him as a free agent and would pay him what he wanted – even if he had to take the hit on a contract length.

Instead, Perez stood firm and negotiated the signing of David Alaba on a free transfer following his contract expiring at Bayern Munich – and Ramos was no longer needed.

David Alaba was presented with the famous No.4 shirt by Real Madrid president Florentino Perez upon signing for the club

By the time Ramos realised the situation, it was too late. He agreed to the one-year deal on reduced terms, but the offer had already been withdrawn.

This ruthlessness was seen before when Madrid allowed Iker Casillas to leave as a free agent in 2015 and their lack of patience with struggling managers; Carlo Ancelotti, Rafael Benitez and Julen Lopetegui have been among those to whom no mercy was shown.

For Perez, Real Madrid are business and whilst he recognises that emotional attachments are significant, this cannot jeopardise the club’s position and tough decisions need to be made.

The same is true over allowing Raphael Varane to join Manchester United – Madrid were not willing to offer the player a sizable salary increase when the club were making cutbacks and, entering the final year of his contract, decided to cash-in on him.

The situation was more complex and nuanced; Varane had his heart set on United due to both sporting and economic reasons, but the swiftness of the decision was still striking.

A central defensive partnership who won three La Liga titles and four Champions League crowns together both gone within weeks, and the club had no time to feel sorry for themselves.

Laporta’s words on Ilaix suggest Barcelona have realised – perhaps too late – that ruthlessness is required and clubs cannot become hostages to agents and representatives of players who are willing to squeeze more money from their clutches.

It may mean Barca lose their extraordinarily talented midfielder, but it is more important to set a precedent for future negotiations.