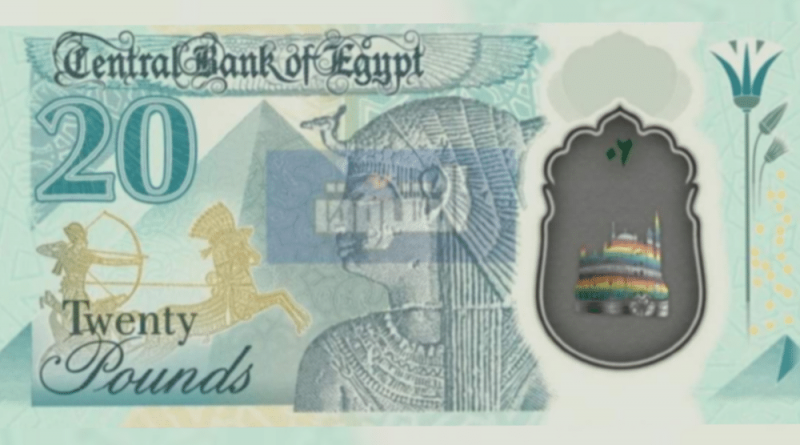 The Central Bank of Egypt has confirmed a new banknote with a rainbow watermark is not designed to promote LGBT+ rights.

The new 10 and 20 pound notes made from a durable polymer plastic attracted immediate criticism when samples were unveiled by the Central Bank of Egypt on Sunday (1 August).

Social media users fumed over the appearance of a rainbow-coloured watermark over a mosque, leading to accusations that the banknote’s designer was trying to promote LGBT+ rights in Egypt’s conservative society.

“This is a great scandal and a sin!” commented one person on Twitter. “The government/central bank/relevant ministries are responsible for this shameful act of placing an image of the gay flag on a mosque on our national currency note! They must correct it and issue an apology!”

Others criticised the note for depicting an image of the newly-built Al-Fattah Al-Aleem mosque, which was inaugurated in 2019 by president Abdel Fattah Al-Sisi.

Another outraged user complained: “20 pounds with the gay flag on it and ten pound notes with Abdel Fattah El Sisi’s mosque on it, when we have hundreds of other prominent mosques and historical monuments!”

Although LGBT+ identities are not criminalised by law in Egypt, the conservative culture broadly views homosexuality as “immoral” and 95 per cent of Egyptians believe it should not be accepted in society.

As people began calling for a boycott of the new “gay” currency, several sources assured Egypt Independent that the only purpose of the rainbow colours was to prevent counterfeiting.

The bank also stepped forward to clarify that the rainbow that appeared on the bills is not part of the design, but rather a secure watermark feature, adding that the pictures circulated are preliminary and not the final designs.

The new plastic money will reduce the costs of printing the traditional currency as it is made of polymer that is harmless to the environment. It also has twice the lifespan of the paper currency, which has long been criticised for its dirty appearance.

Thankfully, not everyone was so resistant to the change. “This step towards plastic money was long overdue,” said the Egyptian actor Nabil al-Halafawy, offering his opinion. “The wear and dirt of small banknotes was a disgrace to the Egyptian currency.”