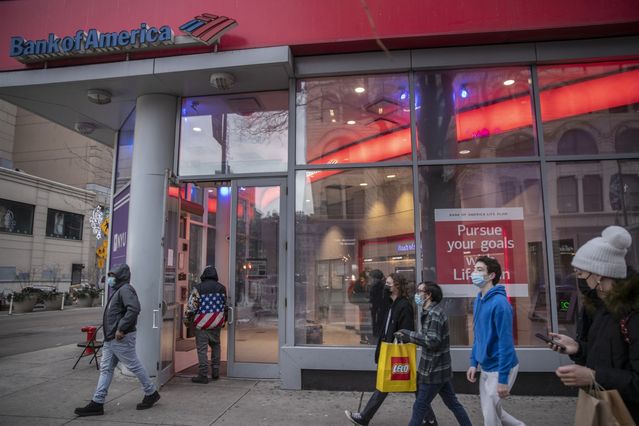 delivered strong fourth-quarter earnings Wednesday, bucking a trend seen across much of the sector this earnings season.

Profits at the bank increased by 28% from the year-ago quarter, amounting to $7 billion, or 82 cents a share, beating the 77 cents projected by analysts surveyed by FactSet. Revenue of $22.1 billion was slightly lower than analysts’ forecasts but  was 10% higher than the fourth quarter of 2020.

Despite the slight miss on sales, there was a lot like in Bank of America’s (ticker: BAC) numbers, especially in light of a challenging earnings season for the banks, which saw peers such as JPMorgan Chase (JPM) dogged by higher expenses and Goldman Sachs (GS) posting a rare miss on earnings Tuesday.

And while those banks saw their shares plunge after earnings, Bank of America shares gained as much as 3% in premarket trading Wednesday.

Bank of America also had to contend with higher expenses in the fourth quarter as – just like its peers – it logged higher compensation costs. But the bank said revenue grew faster, allowing the bank to post its second straight quarter of year-over-year positive operating leverage.

Lending was another bright spot at Bank of America as loan balances grew 6% to $979 billion from last year’s fourth quarter and now stand near pre-pandemic levels. For much of the last two years, banks’ bread-and-butter business of lending was under pressure as many households and businesses found themselves flush with stimulus cash, causing a surge on deposits. For Bank of America, deposits grew 15% year over year.

“Our fourth-quarter results were driven by strong organic growth, record levels of digital engagement, and an improving economy,” Bank of America Chief Executive Brian Moynihan said in a statement. “We grew loans by $51 billion and added $100 billion of deposits during the quarter, further strengthening our position as the leader in retail deposits.”

Like its banking brethren, Bank of America also had to contend with a drop in trading activity as markets have been less volatile than they were at the start of the pandemic. However, the drop for Bank of America was more muted with the bank seeing only a 2% decrease in trading revenue.

For the full year, Bank of America’s results were even more impressive as the bank notched record profits of $32 billion, up from $17.9 billion in 2021.