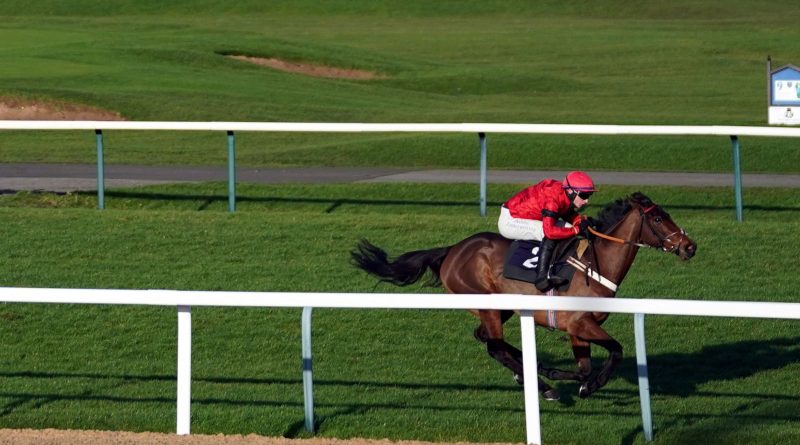 
Ballyglass looks an exciting prospect for Toby Lawes to go to war with judged on an excellent British debut at Southwell.

The Montmartre gelding was placed on each of his three starts in Ireland and the form could hardly have worked out better – finishing third behind subsequent maiden hurdle winners Bronn and Howyabud at Ballinrobe and runner-up at Roscommon to The Big Doyen, who has since sluiced in at Punchestown.

The five-year-old had since changed hands for £60,000 at the Tattersalls sale at Cheltenham in November, which appears excellent value judged on his performance in the Midlands.

“He’s still quite a raw type who has got quite a bit of maturing to do, so I’m really pleased with that performance today.”

Given his impressive credentials, it was no surprise to see Ballyglass sent off the 3/1 favourite for the Off The Fence On youtube.com/attheraces Open Maiden NH Flat Race.

Tom O’Brien’s mount eased to the lead over a furlong out and was ultimately good value for the winning margin of three and a quarter lengths over Ohnodonttakemehome.

“We were quite lucky that we bought him two days before The Big Doyen went and won at Punchestown. We probably wouldn’t have been able to afford him if he’d gone to the sales after that,” Lawes added.

“Sam Curling, who trained him in Ireland, told me he wrapped him up in cotton wool between his last run and the sale, so when we got him his fitness wasn’t quite there.

“We’ve brought him back up and with every bit of work we’ve done with him, he’s made a step forward every time. He went nicely in his last piece of work.”

Ballyglass is likely to be stepped up in class on his next start, with Newbury on February 12 a potential next port of call.

However, Lawes is not keen on a tilt at the Champion Bumper at the Cheltenham Festival in March.

He said: “There’s a Listed bumper at Newbury, but we’ll just see how he comes out of the race.

“In an ideal world you’d probably go to Newbury and then Aintree (in April), but the way the conditions are we can’t do both as he’s already run in four bumpers.

“If he wanted to have another two races one of them would probably have to be the Champion Bumper and that’s not really a race I want to take him to.

“There’s no hurry as this guy’s life is clearly ahead of him – he’s a proper Saturday chaser in the making.”

Elsewhere on the card brothers Dan and Harry Skelton teamed up to complete a double.

Her stablemate Colonel Manderson (13-8) also struck gold as the market leader in the Read Kevin Blake On attheraces.com Novices’ Handicap Hurdle, with eight and a half lengths the margin of victory.

Brorson was an impressive winner of the feature on the day, taking the Sky Sports Racing Virgin 535 Handicap Hurdle by 16 lengths, from Domain De L’Isle and Lecale’s Article.