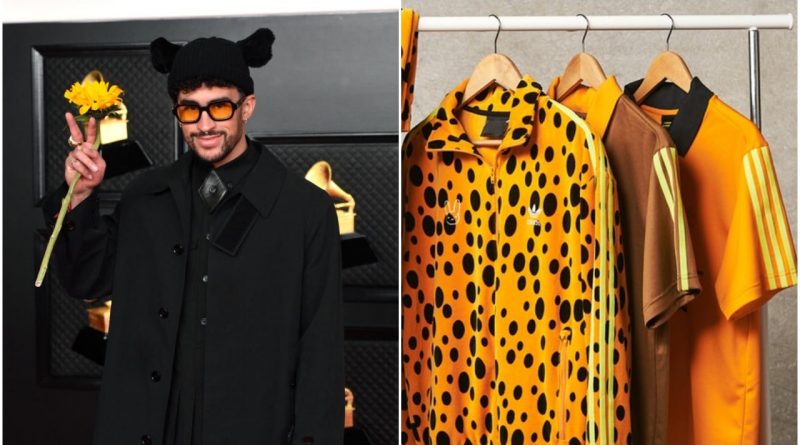 Bad Bunny, Adidas and Cheetos will release the collection this August. (Kevin Mazur/Getty Images for The Recording Academy & Adidas)

Bad Bunny has teamed up with Adidas and Cheetos for a clothing collection, but it’s all for a good cause.

The initiative was designed by Bad Bunny to celebrate Hispanic culture and its impact on society.

This time round fans can get their hands on a fashion collection in collaboration with the rapper, Cheetos and Adidas.

It features a cheetah-patterned tracksuit and two football jerseys embellished with Bad Bunny and Adidas logos as well as Cheetos across the chest.

The collection will be released from 6 August via NTWRK which can be downloaded from the App Store or Google Play.

One hundred fans will receive first access to the clothes in a unique way through Cheetle iD technology – which will actually detect if fans have Cheetos dust on their fingers.

Plus there’s also the launch of the Deja ty Huella Estudiante Fund, which will give a total of $500,000 to students in the US and Bad Bunny’s native of Puerto Rico.

It will see ten students receive a $50,000 scholarship to use towards their education, with entries asked to take part in the #DejaTuHuella TikTok Hashtag Challenge by submitting a 60-second video that shows how they’re leaving their mark in the world.

Bad Bunny has previously teamed up with Adidas on exclusive trainers including a pink pair and a brown pair which both sold-out due to huge demand.

The rapper has proven himself to be an ally to LGBT+ since his breakthrough onto the music scene.

In 2020 he paid a touching tribute to a trans woman who was brutally killed in Puerto Rico, where Bad Bunny is also from.

He wore a t-shirt that read “they killed Alexa, not a man with a skirt” in Spanish, during a performance on The Tonight Show Starring Jimmy Fallon.

He also got a full drag makeover in the music video for his song “Yo Perreo Sola”, with him telling Rolling Stone: “I have always felt like there [was] a part of me that is very feminine.”

“But I never felt as masculine as I did the day I dressed up like a drag queen,” he added.

And despite some backlash he explained: “I did it to show support to those who need it. I may not be gay, but I’m a human who cares.”