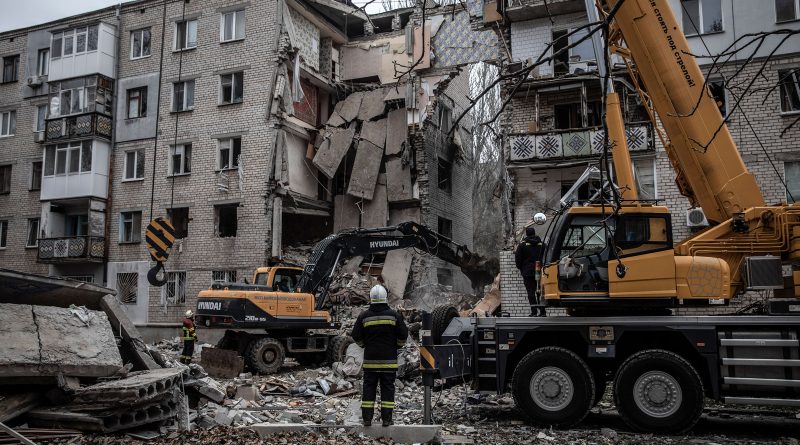 
Sheltering from Iranian kamikaze Shahed drones in the Kyiv metro in October, I tried to hide my extreme nervousness while simultaneously scrolling through social media videos of antiregime protests in Iran, where relentlessly courageous crowds of women were ripping off their shawls in defiance of the ayatollahs who sell the Shahed drones to the Kremlin, which then uses them to attack civilians in the city of my birth.

It was a reminder of how the war in Ukraine is about fighting not only Russia, but also a whole network of authoritarian regimes. Vladimir Putin claims Russia’s invasion will usher in a new era of what he calls a “multi-polar” world, but which in practice means an era where the Russias, Chinas, and Irans of this world are increasingly free to strip away the last vestiges of human rights and humanitarian rules; where big states are ever more free to suffocate smaller ones in their “spheres of influence”; where the powerful can murder critics with impunity; where fossil-fuel dictatorships can hold the world ransom; where any hope of speaking truth to power is sunk under a deluge of disinformation; and the state can surveil your every digital footprint.

But Putin miscalculated. Instead of strengthening his authoritarian network, the invasion of Ukraine can be a rallying point for democratic solidarity. As I sat in the Kyiv metro and sighed with relief at the boom of American and Norwegian air-defense systems taking out the Shahed drones, I found myself rooting on the Iranian protests even harder.

Victory in their struggle would help secure our survival. Similarly, anti-corruption investigative journalists, environmental activists, and digital-rights campaigners around the world all have a role to play in defeating Russian aggression. And Ukraine’s victory in Kherson will in turn deter China from launching wars in Asia.

Russia’s invasion of Ukraine is the flash point in the great struggle of the 21st century: between one version of an interconnected world that gives justice, freedoms, and rights a chance, and a much darker prospect of weaponized interdependence, where everything from the cost of food on your supermarket shelves to your domestic energy bills, what media your children watch on their phones, and what will be taught in our universities will be defined by the Putins and Xi Jinpings.

Rescue workers at a damaged apartment block in Mykolaiv on Nov. 11, 2022.

But it would be a mistake to imagine this new competition as some sort of Cold War redux, with two neat sides with clear, opposing ideologies—communism vs. democratic capitalism—and two clear geographical blocs. Though some of the underlying conflicts may be the same—between systems that crush people as a point of political principle and those that at least try to value people’s dignity—-the tactics, territories, and political visions are completely different from those of the 20th century.

This was not how the “arc of history” was meant to bend. After the divisions of the Cold War, many thought we were entering what the New York Times columnist Thomas L. Friedman called “the age of globalization.” In this interconnected global village, the free flow of money, goods, information, and cultural exchange across borders would supposedly lead to countries like China and Russia becoming “more like us” through increased contact.

Instead something much more insidious has emerged. The free flow of money has enabled kleptocracy and corrupt influence; the growth of trade has not made dictatorships more like democracies but allowed dictatorships to have leverage over democracies. Welcome to a world where China punishes Australia when it dares to -criticize -Beijing’s abuse of human rights; where Russia can close off Ukraine’s grain exports and thus risk starving countries in the Global South, in order to blackmail the world into allowing Moscow to pursue genocide in Ukraine; and where Moscow manipulates energy prices in the West to force Europe and the U.S. to acquiesce to its political demands.

At a speech in Taipei in October, the historian Anne Applebaum, my colleague at the SNF Agora Institute, Johns Hopkins University, used the term Autocracy Inc. to describe how authoritarian regimes have learned to support one another: “The corrupt, state-controlled companies in one dictatorship do business with corrupt, state-controlled companies in another. The police in one country can arm, equip, and train the police in another … Unlike military or political alliances from other times and places, the members of this group don’t operate like a bloc, but rather like an agglomeration of companies—call it Autocracy Inc. Their links are cemented not by ideals but by deals.”

Another of my Johns Hopkins colleagues, Henry Farrell, frames the economic aspect of this tussle from the perspective of what he calls “weaponized interdependence.” America has thus far been able to dominate—for good and ill—a global system where it can impose sanctions on any company via the American-controlled dollar-trading system.

Now Russia and China want to weaponize interdependence—and it will be much more ruthless. This goes beyond mere state-on-state economic bullying to manipulating whole supply chains. After Lithuania angered China by allowing a representative office for Taiwan to open in the Baltic state, China didn’t just attack Lithuanian companies directly, but also pressured German companies to stop using any Lithuanian parts in its cars if they wanted access to Chinese consumers.

In the romantic version of the global village, trans-national media was meant to bring mutual understanding across borders. Russia exploits the free flow of information with its armies of bots and state media channels, and China instills “Confucius Institutes” in universities across the world, which give generous funds—and then limit what academics can say on China. Instead of internet technology bringing people across the globe closer to democracy, any aspiring autocrat can shop for what have been called authoritarian services, such as surveillance technologies from China or Pegasus spyware from Israel, that let them monitor their citizens to an unprecedented extent. Chris Walker, vice president for analysis at the National Endowment for Democracy, calls these transnational tactics “sharp power,” as opposed to the idea of states having soft power, which makes them attractive to foreign populations. These days the aim is to be feared, not loved.

But the systems that “sharp power” takes advantage of are created in and for the benefit of democracies. The shady offshore tax havens that enable the free flow of dirty money were created by democracies and make money for the financial sector in democracies. Corruption is not something from “over there” that comes “here.” It’s implicit in the system we created. Likewise with the world of online disinformation campaigns. Russia distorts the truth about its crimes in Ukraine simply by using Western social media, which is built in such a way that a citizen has little right to know who is manipulating them and how, why algorithms show you one piece of content and not another, which part of your data is being used by whom and for what purpose. Ukraine has become the crucial front where this future is being decided.

Ukraine’s resilience and victories on the battlefield mean Russia’s attempt to usher in its bad new world are not going to plan. But to secure Ukraine’s sovereignty—and our own—we need to break the power of networked authoritarians and the way they weaponize interdependence. The two processes are synonymous.

Putin thought that other countries’ desire to do business with Russia, and their energy dependency on Russia especially, would give him a free hand in Ukraine. Things haven’t gone that smoothly. Many companies have pulled out, and Europe is scrambling toward energy freedom from Russia. But many companies have also stayed. Many do business through intermediaries and shell companies. Many countries in Europe remain reliant on Russian fossil fuels.

The companies still trading in Russia are not just unethical, they are making us all less safe and our lives more expensive by emboldening Putin ever more. In order to increase pressure on companies and countries still doing business with the Kremlin, we will need a much more aggressive civil society that marshals environmental activists, anti-corruption researchers, and supporters of Ukraine’s sovereignty to pressure those companies and politicians that sell out our security, environment, and long-term prosperity. It’s time to put an end to the myth that more trade will automatically lead to peace. Economics has to be reconnected to security and values.

The war in Ukraine has also reinforced the need for more democratic regulation of the internet. Many of the Russian online campaigns are non-transparent, hiding their origin behind websites that impersonate genuine news sources and fake accounts. We need to push for regulation of tech companies that will give citizens the right to know who is trying to influence them and how platforms enable this.

Russian propaganda has also surfaced the issue of the legal culpability of propagandists. We are not talking here merely about repugnant forms of speech, but coordinated information campaigns involving both legacy and online media that build in the run-up to and the aftermath of attacks on civilian objects. Putin’s minions—both propagandist and military—believe they can commit war crimes with impunity. They may be about to discover they are wrong.

But if Russia wins militarily in Ukraine, all these aspirations for a more just world will be moot. And before we get carried away with the potential for democratic solidarity, we will have to answer how far it really goes. We are all grasping for terms to describe a world where the liberation of a village on the Dnipro is dependent on what side of the bed a tech oligarch like Elon Musk wakes up on. The tempting apple of globalization has turned out to be lined with hidden razor blades. The dense economic, political, and cultural wiring interconnecting the world short-circuits, surges, and sends sudden electric shocks that hurt whole nations.