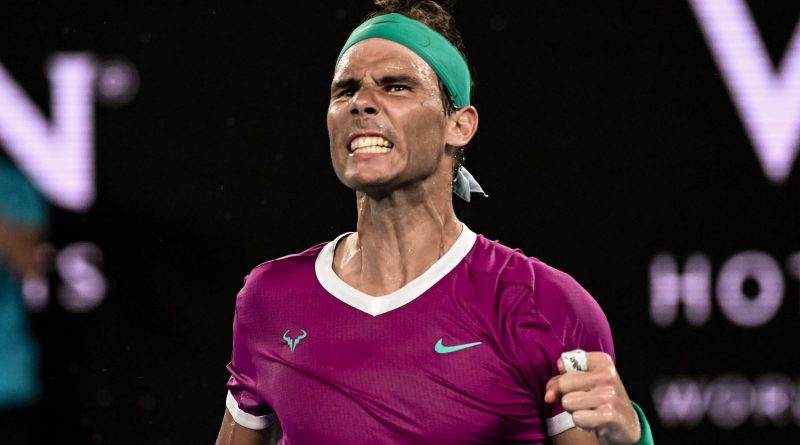 Rafael Nadal recovers from two sets down to win a match for first time since beating Mikhail Youzhny at Wimbledon in 2007; he claims his first Australian Open title since 2009 to move ahead of Roger Federer and Novak Djokovic in Slam stakes; it’s his first major since French Open in 2020

The Spaniard battled back to win from two sets down for the first time at a Grand Slam in 15 years to complete a remarkable chapter in his extraordinary career, moving him one clear of Roger Federer and Novak Djokovic in the Slam stakes.

His incredible 2-6 6-7 (5-7) 6-4 6-3 7-5 victory after five hours and 24 minutes was his second triumph at Melbourne Park – his first since 2009 – and made him only the second man after Djokovic to win every Grand Slam title at least twice since the sport turned professional in 1968.

Nadal, playing in his 29th Grand Slam final, was put under intense early pressure by the big-serving Medvedev, who was competing in his fourth major final.

On each of those four occasions, the Russian has faced either Djokovic or Nadal, who beat the 25-year-old in a thrilling US Open final in 2019.

A more mature Medvedev came out on top of a 26-shot rally, but Nadal showed phenomenal reflexes to stay ahead following an absorbing third game.

The Spaniard was unable to stop Medvedev on his next service game, however, as the Russian finally broke Nadal’s resistance.

He reeled off a total of five games in a row to claim the opener, leaving Nadal with the headache of solving the Medvedev puzzle.

Nadal, who posted a photograph of himself on crutches after a medical procedure almost five months ago, had the capacity crowd on Rod Laver Arena on their feet when he produced an acute sliced backhand winner after an epic 40-shot rally en route to breaking through for a 3-1 lead in a topsy-turvy second set.

The momentum appeared to be with Nadal, who was playing in a sixth Australian Open final and first here since 2019, but his first serve percentage was short of 50 per cent – simply not good enough to keep Medvedev at bay as he hit back immediately.

There were dramatic scenes with Nadal facing break point serving for the second set at 5-3 when a man waving a banner jumped out of the crowd and down onto the court.

He was only metres from Medvedev but was immediately tackled by several security men and hauled away.

When the match resumed, Medvedev’s never-say-die approach paid dividends. He saved a set point before breaking back and sending the contest into an inevitable tiebreak situation.

Again Nadal led 5-3, but this time Medvedev claimed the next four points in a row to win a brutal set lasting one hour and 24 minutes. After ending it with a smart backhand pass, the Russian taunted the crowd, who responded with boos.

It was the second year in a row Medvedev has made the final at Melbourne Park, having lost to Djokovic 12 months ago, but this time he was in prime position to get his hands on the Norman Brookes Challenge Cup.

In typical Nadal fashion, he wasn’t giving up. The Spaniard had not recovered from two sets down to win a match since beating Mikhail Youzhny at Wimbledon in 2007, while he faded physically after the first two sets against Denis Shapovalov and Matteo Berrettini here.

After battling back from 0-40 at 2-3 in the third set, he pounced at 4-4 with a scorching backhand down the line before serving out the third set to keep his hopes of a comeback alive.

The pendulum appeared to swing the way of the sixth seed early in the fourth set when a double fault from Medvedev was greeted by loud cheers from Nadal’s supporters in the crowd, but the world No 2 probed his way back for 2-2.

A third successive break of serve followed, with Nadal luring Medvedev in before passing him with ease on his seventh break point opportunity.

This time, Nadal consolidated his lead for a 4-2 advantage with the physicality of the match appearing to take its toll on the Russian, who was allowing himself to become increasingly wound up by the crowd, appealing repeatedly to umpire John Blom to control them.

Nadal created a set point on his opponent’s serve at 5-3, which Medvedev saved, but the Spaniard took it 6-4 on his own serve to level up an incredible final.

Medvedev, who was looking to become the first man in the professional era to win his first two Grand Slam titles in succession, appeared to be hanging on.

And after four hours and 40 minutes of action, Nadal broke his resistance to hit the front at 3-2 in the deciding set before he came out to serve for a place in history at 5-4.

In another dramatic twist, Medvedev broke a nervous Nadal for 5-5, but in incredible scenes, the Spaniard bounced back to get another chance to serve for the title.

This time, the 35-year-old delivered just when it mattered most to complete his most improbable triumph.

He will now be favourite again to claim his 14th French Open title and extend his Grand Slam streak to No 23 later this year.