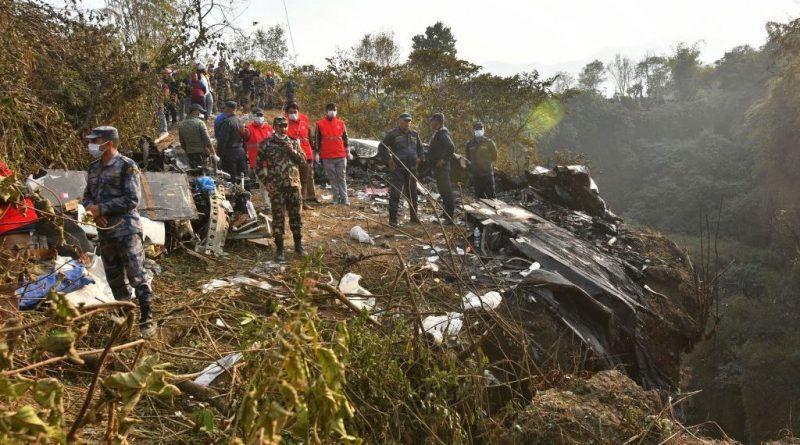 
A domestic flight traveling from the capital of Nepal, Kathmandu, crashed near Pokhara International Airport on Sunday morning, killing at least 68 people, according to officials.

The aircraft, operated by Nepal’s Yeti Airlines, was holding 68 passengers and four crew members, officials said. Fifteen of these people were international travelers from countries like India, Russia, South Korea and France, among others.

“Pained by the tragic air crash in Nepal in which precious lives have been lost, including Indian nationals,” tweeted Indian Prime Minister Narendra Modi on Sunday. “In this hour of grief, my thoughts and prayers are with the bereaved families.”

Flight NYT 691, an ATR 72-500 aircraft, was flying from the capital of Kathmandu to Pokhara, and was scheduled to be a short 24 minute long-trip. The plane left Kathmandu at 10:32 a.m. and last made contact with the tower at 10:50 a.m. Local media reports say that the pilot requested the aircraft land on a different runway before crashing on the bank of the Seti River, according to the Aviation Safety Network.

Authorities and rescue teams rushed to the crash site to conduct a search and rescue operation, which continued into the early evening before officials decided they would resume the search on Monday, according to Nepal’s civil aviation authority.

The cause of the crash is still under investigation. Yeti Airlines said they would be canceling all flights on Monday to mourn the victims of the crash.

ATR released a statement on Sunday following the crash.

“Our first thoughts are with all the individuals affected by this,” the statement read. “ATR specialists are fully engaged to support both the investigation and the customer.”

This incident marks Nepal’s worst crash in more than 30 years, when the country suffered two deadly plane crashes in 1992. Those crashes, however, were operated by international airlines from Thailand and Pakistan, and left 113 and 167 people dead.

Since 2000, nearly 350 people have died in a plane or helicopter crash in Nepal, according to Reuters. The European Commission’s Air Safety List also prohibits all Nepali airlines from operating in Europe due to safety concerns.

“I am deeply saddened by the tragic accident of Yeti Airlines ANC ATR 72, which was flying from Kathmandu to Pokhara with passengers,” tweeted Pushpa Kamal Dahal, the Prime Minister of Nepal. “I sincerely appeal to the security personnel, all agencies of the Nepal government and the general public to start an effective rescue.”