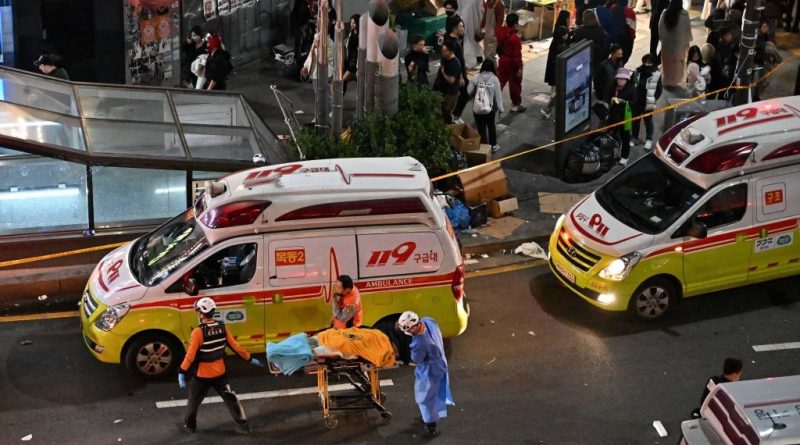 
At least 120 people were killed and 100 more were injured as they were crushed by a large crowd pushing forward on a narrow street during Halloween festivities in the capital of Seoul, South Korean officials said.

Choi Seong-beom, chief of Seoul’s Yongsan fire department, said the death toll could rise and that an unspecified number among the injured were in critical conditions following the stampede in the leisure district of Itaewon Saturday night.

He said 74 of the dead have been sent to hospitals while the bodies of the remaining 46 who had been kept on the streets were being transported to a nearby gym so that workers could identify them.

Officials say people were crushed to death after a large crowd began pushing forward in a narrow alley near Hamilton Hotel, a major party spot in Seoul.

More than 800 emergency workers and police officers from around the nation, including all available personnel in Seoul, were deployed to the streets to treat the injured.

The National Fire Agency separately said in a statement that officials were still trying to determine the exact number of emergency patients.

TV footage and photos showed ambulance vehicles lined up in streets amid a heavy police presence and emergency workers moving the injured in stretchers. Emergency workers and pedestrians were also seen performing CPR on people lying in the streets.

In one section, paramedics were seen checking the status of a dozen or more people who lied motionless under blue blankets.

Police, which were restricting traffic in nearby areas to speed up the transportation of the injured to hospitals across the city, also confirmed that dozens of people were being given CPR on Itaewon streets. The Seoul Metropolitan Government issued emergency text messages urging people in the area to swiftly return home.

Some local media reports earlier said the crush happened after a large number of people rushed to an Itaewon bar after hearing an unidentified celebrity visited there.

South Korean President Yoon Suk Yeol issued a statement calling for officials to ensure swift treatment for those injured and review the safety of the festivity sites. He also instructed the Health Ministry to swiftly deploy disaster medical assistance teams and secure beds in nearby hospital to treat the injured.

Local media said around 100,000 people flocked to Itaewon streets for the Halloween festivities, which were the biggest since the start of the pandemic following the easing of COVID-19 restrictions in recent months.