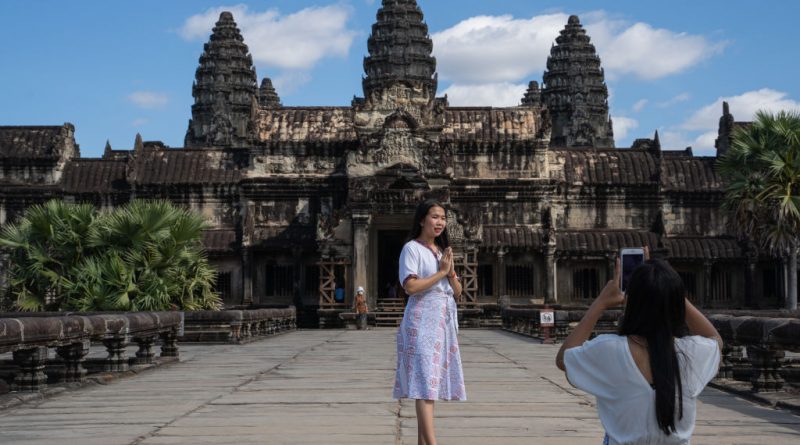 
Huoch Yen worked hard to become a tour guide at Cambodia’s famed Angkor Wat temples. It took the 43-year-old three attempts to pass a test for a license to guide Spanish-speaking tourists around Siem Reap, where the famous monuments are located—to say nothing of the years spent studying the language.

When the COVID-19 pandemic put the brakes on tourism in 2020, Yen decamped to his hometown in Kompong Cham province, a five hour drive away, where he now works as a teacher. But he still dreams of returning to his job as a guide.

“I contact my friend who is living in Siem Reap to ask him about tourism every day,” says Yen. “He still tells me that it’s not going well. There are limited tourists right now—it’s not like before.”

Before coronavirus struck, Angkor Wat was one of the world’s most crowded tourist spots. Throngs of travelers from across the globe would arrive each day before dawn, jostling for a spot across a small pond from the main temple complex. There they would attempt to take photos of the sunrise in an atmosphere resembling a mosh pit.

These days, it’s very different. The Southeast Asian nation is hoping to notch a million international visitors this year—a big increase on the paltry number of visitors it welcomed in 2021, but a huge fall from the 7 million that visited in 2019.

As tourists elbow through the crowd to take selfies at Rome’s Trevi Fountain, or swarm the Strip in Las Vegas, many once crowded tourist spots in Asia-Pacific, like Angkor Wat, remain eerily quiet.

In June, the white sand beaches of Boracay—the most popular island in the Philippine archipelago—were largely free of foreigners. Earlier this month, tourist boat operators on Phi Phi—the Thai islands made world famous by Hollywood movie The Beach (2000)—were complaining that visitor numbers were “not even half” their pre-pandemic levels. In nearby Phuket, and in the Thai capital Bangkok, guides and drivers told TIME that they had had no income for over two years.

Read More: Can Barcelona Fix Its Love-Hate Relationship with Tourists?

A two-and-a-half hour flight away in Hong Kong, there are concerns that the iconic Star Ferry—once rated the world’s “most exciting ferry ride”—could go bust for lack of passengers. Japan, which hosted more than 30 million tourists in 2019, welcomed just 1,500 leisure travelers between June and July—normally peak travel season. In April, dive instructors and hotel staff in Palau told TIME that tourists, which accounted for almost 50% of the pristine Pacific nation’s GDP before the pandemic, hadn’t yet returned in meaningful numbers.

A Star Ferry prepares to dock in Central on Victoria Harbour in Hong Kong on May 4, 2022. The Star Ferry, which traces its origins back to the 1880s, has struggled financially to keep afloat after tourist arrivals in the southern Chinese city plummeted

According to the United Nations World Tourism Organization, international tourist arrivals in Asia-Pacific, from January to May 2022, were 90% below 2019 levels—making it the worst performing region globally. Many experts predict that it will continue to lag behind.

Domestic and international traffic within Asia-Pacific this year is expected to reach only 68% of 2019’s figures. Travel is not forecast to hit pre-pandemic levels until 2025, a year behind the rest of the world, according to the International Air Transport Association (IATA). For some destinations, the rebound may take even longer. Tourism in India won’t fully recover until 2026, according to a report by National Council of Applied Economic Research (NCAER).

Asia’s slower recovery is due to myriad factors like the staged opening of markets, the phased restoration of routes and capacity, and the “consumer misperception” that traveling to the region is complex because of ongoing COVID restrictions, says Liz Ortiguera, the CEO of the Pacific Asia Travel Association (PATA).

But there is no denying that Asia’s pandemic rules can spoil the vacation mood. Bhutan is closed to visitors until September. Singapore still requires people to wear masks indoors. Vietnam requires masks in public places, as does Hong Kong, where a self-funded three-day hotel quarantine is required for all arrivals, followed by several days of medical surveillance at home. The latter involves twice-daily temperature checks, uploading daily RAT test results to a government website, and taking three PCR tests in a five-day period.

Read More: Is the Summer of Revenge Travel Here?

Japan is currently requiring tourists to join organized tours. That’s been difficult for Kyoto tour guide and taxi driver Hiroshi Yano, who has depended on government subsidies, and ferrying locals around instead of tourists, to make ends meet during the pandemic. He says there’s much less work without the millions of tourists that used to flock to Kyoto each year, walking from temple to temple to take photos dressed in rented kimonos. “Not only I, but other small-scale businesses, like small hotels and restaurants, are still suffering,” he tells TIME.

The absence of Chinese travelers is a particularly big problem for the region. Thirteen Asian countries relied on China as their top source of visitors, and they were the second-largest source for another six economies, according to the Economist Intelligence Unit’s Travel-ready Index for 2022. But fearing that its citizens may return home with the virus, Beijing has been restricting “unnecessary” overseas travel as part of its draconian pandemic measures. The recent stranding of thousands of domestic travelers in China’s resort island Hainan, after a COVID outbreak there, will also make many reluctant to risk travel within China itself.

The five-storied pagoda in Kyoto, Japan, on June, 26, 2022. Once weary of hordes of foreign tourists crowding its narrow streets and ignoring etiquette, many in Japans ancient capital of Kyoto are longing for their return

Some destinations are faring better than others. The Maldives, which receives a big portion of its tourists from nearby India, is among places seeing a quicker rebound. Steven Schipani, a principal tourism industry specialist at the Asian Development Bank, says that the Maldives’ international visitor arrivals are now close to pre-pandemic levels, thanks to a rapid vaccination campaign, good air connectivity with large source markets, and streamlined entry requirements.

June arrivals in Fiji were meanwhile 73% of the same month pre-pandemic. And even though COVID restrictions remain in Indonesia, Andrew Roberts, who owns the Padang Padang surf camp in Bali, tells TIME that he’s seen a steady flow of tourists coming back to surf the island’s world-class breaks, such as the towering waves of Uluwatu. Accommodation at the camp has been at pre-pandemic occupancy levels for some weeks now.

Asia-Pacific travel is “a sleeping dragon that is waking up in stages,” says Ortiguera. “Recovery is highly uneven right now, but domestic tourism has developed, travelers have been attracted from new source markets and more lesser-known destinations are being marketed.”

Read More: Revenge Travel May Be a Big Problem for Places Like Thailand’s Maya Bay

She argues that this is a pivotal time for a shift towards a healthier, more sustainable travel industry—and indeed, many see this moment as a chance to do away with over-tourism.

“Over-dependence on international tourism and the need for some Asia-Pacific countries to diversify their economies was an issue even before the pandemic,” Schipani says. “Now, many countries are redoubling their economic diversification efforts.”

Tourism workers on the front line, though, are pinning their hopes on a quick rebound. Yen, in Cambodia, plans to go back to Angkor Wat to work as a tour guide as soon as he can. “I can earn much more as a tour guide than as a teacher,” he says. “I can meet many people around from around the world and get new experiences.”

In Hong Kong, 32-year-old Carrie Poon, misses her old life. Before the pandemic, she led food tours, taking mostly American and European visitors to off-the-beaten track neighborhoods to try local delicacies like fish balls and rice rolls—even snake soup for the more adventurous. But when Hong Kong sealed its borders, she lost her income and decided to open a small restaurant.

“I loved my tour guide [life] so much,” she says. “If I could choose I would definitely pick the tour guide job but it’s, like, what can you do?”