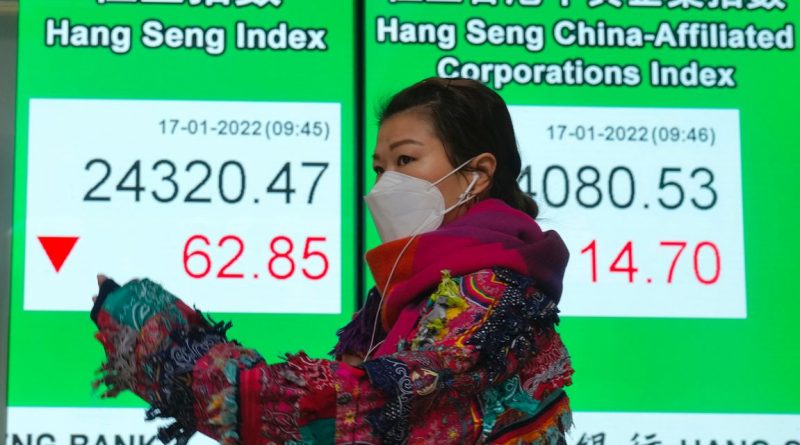 
BANGKOK — Shares were mixed in Asia on Monday after China reported that its economy expanded at an 8.1% annual pace in 2021, though growth slowed to half that level in the last quarter.

advanced 0.7% as the government reported machinery orders rose in November as private investment and manufacturing activity improved during a lull in coronavirus outbreaks. Shipbuilders orders surged 170%.

sank 1.2% after North Korea fired two suspected ballistic missiles into the sea early Monday in its fourth weapons launch this month, South Korea’s military said, with the apparent goal of demonstrating its military might amid paused diplomacy with the United States and pandemic border closures.

The weakness in China’s economy toward the end of 2021 is prompting suggestions Beijing should intervene to prop up growth with interest rate cuts or by injecting money into the economy through public works spending.

Shortly before the growth data were released, the Chinese central bank announced a rate cut on medium-lending to commercial banks to the lowest level since 2020.

“The upshot is that policy easing is likely to soften the economic downturn rather than drive a rebound,” he said.

Slowing activity in China, the region’s biggest economy, can chill growth throughout the region. Lockdowns and other precautions imposed to combat outbreaks of coronavirus can also worsen shortages of key parts and components, adding to difficulties with shipping and supply chains.

eked out a 0.1% gain to 4,662.85, surging in the final minutes of trading after having been down about 1% earlier in the day. The tech-heavy Nasdaq
COMP,

A rally in technology stocks, plus gains in energy and other sectors, helped outweigh declines in banks and elsewhere in the market on a day when investors were mainly focused on a mix of company earnings reports and discouraging data on retail sales.

The mixed finish capped a week of choppy trading on Wall Street that deepened the market’s January slump. The benchmark S&P 500, which soared 26.9% in 2021, is now about 2.8% below the all-time high it set on Jan. 3.

The Commerce Department reported Friday that retail sales sank 1.9% in December after Americans cut their spending in the face of product shortages, rising prices and the onset of the omicron variant.

That was the latest in a series of economic reports this week that has raised concern about inflation and its impact on businesses and consumer spending.

Rising prices have been prompting businesses to pass more costs on to consumers. Consumers have been pulling back on spending at department stores, restaurants and online as a result of higher prices and supply shortages.

Concerns over persistently rising inflation are also prompting the Federal Reserve to trim its bond purchases and consider raising interest rates earlier and more often than Wall Street had expected less than a year ago.

rose 40 cents to $84.22 per barrel in electronic trading on the New York Mercantile Exchange. On Friday, it rose 2.1%, helping to send energy stocks higher.