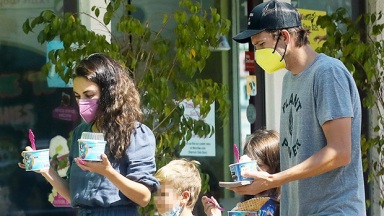 
It was a Kutcher-Kunis family extravaganza on Tuesday (Aug. 16) when Mila Kunis and Ashton Kutcher hit up a Yogurtland location with their children, Wyatt, 7, and 5-year-old Dimitri. The casually dressed Mila, 39, and Ashton, 44, treated their kiddies to some sweets, which helped them all beat the late summer heat. Wyatt opted for waffle cone confectionary delight while the rest of the family stuck with the usual yogurt.

Mila and Ashton opted for facemasks to help ward off the ongoing COVID-19 pandemic. The That ‘70s Show alums dressed like any other parents of two, with Ashton opting for loose jeans, an oversized “Plant Power” t-shirt, and a worn trucker cap. Mila wore a pair of gray-blue shorts with a matching top, her dark hair flowing free in the August air.

The Kunis-Kutcher family was last spotted in Los Angeles in late July. The foursome ran some errands together, with Ashton still rocking the upscale farmhand look – jeans, t-shirt, cap – while Mila opted for a pair of baggy brown overalls. She also opted for what looked like an iced coffee (though it could have been a Boba/bubble tea since both are delicious.)

The frozen yogurt run comes just a week after Ashton revealed on National Geographic’s Running Wild With Bear Grylls that he had a secret health scare that nearly left him blind and deaf. “Two years ago, I had this weird, super rare form of vasculitis,” Ashton said. “It knocked out my vision. It knocked out my hearing. It knocked out all my equilibrium. It took me like a year to build it all back up.”

Later, Ashton weighed in on the revelation. “Before there are a bunch of rumors/ chatter/ whatever out there,” he tweeted to his 17.1 million followers. “Yes, I had a rare vasculitis episode 3yrs ago. (Autoimmune flair-up) I had some impairments hear, vision, balance issues right after. I fully recovered. All good. Moving on. See you at the 2022 NY Marathon w/Thorn.”

Mila Kunis & Ashton Kutcher: The Story Of Their Relationship From ’That ‘70s Show’ To Now