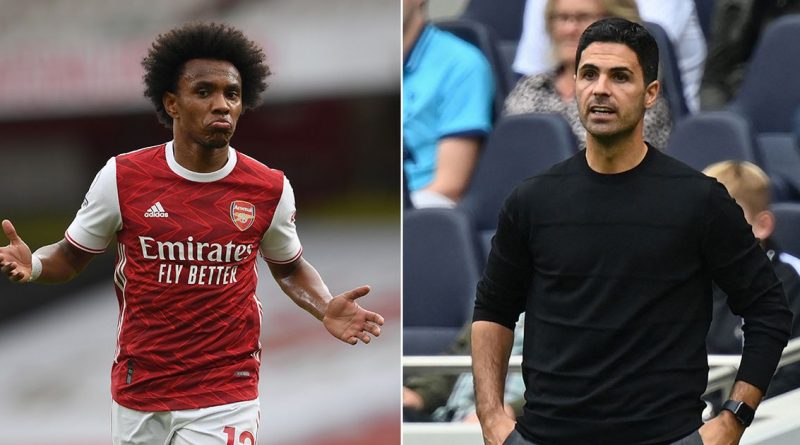 The signing of Willian from Chelsea was considered something of a coup for Arsenal last summer.

The Brazilian was still wanted at Stamford Bridge on a one-year deal and other clubs were keen on his signature.

But with the promise of a three-year contract and big wages, Mikel Arteta was able to fend off rivals to secure the experienced playmaker.

It was not just the financial rewards on offer which helped convince Willian to put pen to paper – it was also the vision being mapped out by Arteta.

Speaking shortly after signing for Arsenal, Willian underlined how the Spaniard was able to tempt him to the Emirates – by claiming they could win the Champions League together in just three years.

Willian told The Sun : “One of the reasons I wanted a three-year deal was to be part of a plan, not just a player passing through.

“When I talked with the manager he told me why he needed me for three years.

“It was that he first wanted to qualify for the Champions League and win it by the time I left. That was what I wanted to hear.

“I was at Chelsea for seven years and won everything except the Champions League.

When will Arsenal get back into the Champions League picture? Have your say below.

“Hopefully this move will give me the trophy I haven’t got as well as another Premier League title.”

Just over a year later, Arteta’s promise to Willian is up in smoke, with the club failing to qualify for any European competition and the Brazilian heading for an early exit.

According to multiple reports, Willian has agreed to tear up his contract, saving the Gunners millions as he prepares to depart for Corinthians in his homeland on a free transfer.

The signing of Willian will go down in Arsenal’s history for all the wrong reasons as one which promised much but delivered little – much like Arteta in his early stages at the helm.