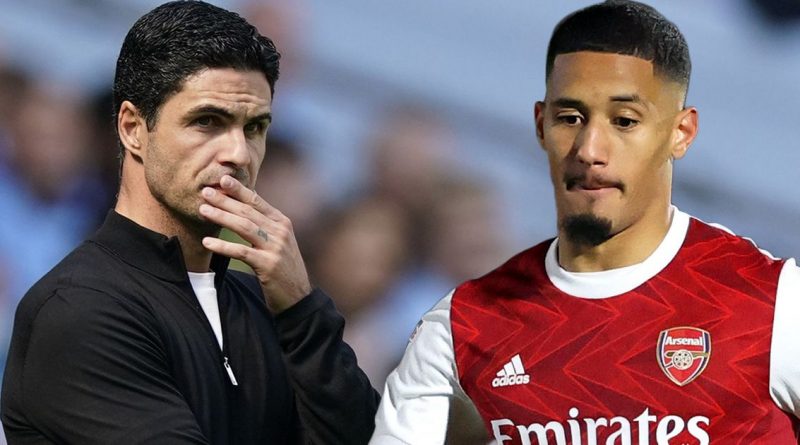 
Arsenal youngster William Saliba was handed the captain’s armband for France Under-21s last week, such has been in impressive form for Marseille on-loan

A glimpse at the Arsenal squad and the direction under Mikel Arteta and technical director Edu is crystal clear.

“We signed six players who are under 23, which means a lot in terms of our planning,” Edu said following the summer window. “Normally, people like to see just one window, so I have to say it is the bigger picture because we started planning this squad a year ago in terms of consolidating the team and to try to get a better foundation.”

Despite spending almost £150m, there was clear vision to add a more youthful element to Arteta’s squad.

But after kicking off the season with three straight defeats, question marks were raised about leaders within the Arsenal dressing room.

Winning three of their last four Premier League games has somewhat eased that pressure and Arteta believes there are signs that a leadership group is emerging.

“I think we are building some leadership in the group,” Arteta explained. “It’s a really young group, with a lot of players under 23.

And away from the Emirates, William Saliba is continuing to blossom into a potential captain of the future.

The Frenchman’s struggles in north London have been well documented. Since arriving in the summer of 2019, Saliba is yet to make a competitive senior appearance and is currently on his third different loan spell.

Now thriving with Marseille, with manager Jorge Sampaoli labelling him as “a future great of French football”, Arteta’s decision to not yet utilise him has come under fire.

Such is his progression back in France, Saliba was named as the Under-21 captain during a recent 5-0 win over Ukraine, highlighting his own innate ability to lead.

William Saliba has impressed during his loan spell at Marseille

“This assurance can be seen from the videos that we have watched with him and we can see it daily.

“It is true that from the perspective of a young player who has arrived, to lead the defence like that already in the manner he has done is surprising.

“You have to understand that this also surprised me. You get the impression that he has been here for a while. He is going to help his teammates, he is very interested in the game and he gives off a lot of maturity.”

With current captain Pierre-Emerick Aubameyang’s long-term Arsenal future in doubt, there is now a look to the future and who could take over the armband.

Out of sight and out of mind, Saliba could find himself towards the back of that particular queue and it could yet prove to be a major error of judgement from the Arsenal boss.