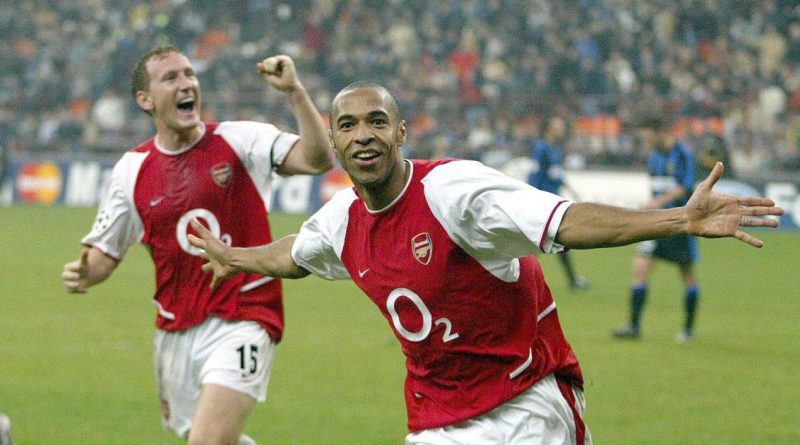 There was a time when for Arsenal, finishing in the top four places and qualifying for the Champions League was a regular occurrence.

Under Arsene Wenger in the early 2000s, the Gunners had emerged as one of England’s superpowers alongside Sir Alex Ferguson’s Manchester United.

Back then, there were no Chelseas or Tottenhams to contend with; these two teams carried the torch for England in continental competition.

Along the way, Arsenal picked up some famous wins: they became the first English team to win at the Santiago Bernabeu when they beat Real Madrid 1-0 in the 2005-06 season.

But no victories were as special as their win on that fateful night in Milan on November 25, 2003. Those in attendance will never forget the echoes of ‘Swing Low, Swing Chariot’ reverberating around the Giuseppe Meazza, or San Siro as it is more commonly known.

It was the Champions League group stage and Arsenal were up against it. Regular starters Lauren and Patrick Vieira were out, while Sylvain Wiltord and Dennis Bergkamp were also absent.

As Wenger would later put it: “Who would have predicted that we would come here and win 5 -1?”

Given that Inter had destroyed Arsenal 3-0 at Highbury in the first fixture, the blunt answer would have been “no one”. The north London side needed to win their last two fixtures to have any chance of qualifying from their group.

Perhaps it was the pain from that defeat which gave the Gunners some extra ammunition for revenge. Or maybe it was clear of Inter underestimating their English opponents.

Either way, what would happen in those cherished 90 minutes inside the San Siro on November 25, 2003 will remain with Arsenal fans for years to come.

The first goal was made straight out of the Arsene Wenger School of Excellence. Ashley Cole pondered in possession on the left waiting for support and it arrived in the shape of Robert Pires.

The Frenchman found Thierry Henry on the edge of the box and, almost like a pinball flapper, rebounded the ball into the path of the onrushing Cole. His touch, perhaps intentional, meant the ball found its way back to Henry and he coolly slotted home past Francesco Toldo into the bottom corner from 18 yards.

Arsenal’s lead wouldn’t last long, however, when Christian Vieri’s speculative effort from a tight angle on the left deflected and looped over Jens Lehmann.

But it was Vieri’s heavy touch that led to Arsenal retaking the lead just three minutes into the second half. Henry bamboozled Javier Zanetti with a slaloming run and fed Freddie Ljungberg and the Swede prodded home from close range.

The third was something special. Inter Milan were furiously pleading for a penalty after Obafemi Martins went down but the Gunners continued as normal, mounting a counter-attack. It was Ray Parlour who steered the header that found Henry and from the centre circle, it was a foot race to the other end with Zanetti.

But the Frenchman was pulling the strings in this battle, slowing to a complete stop before jinxing right, then left and bursting quickly to gain half a yard, before unleashing a stunning low finish into the far corner.

It was an incredible solo goal and one that merely confirmed Henry’s status as one of the world’s best, if not the best. He had tormented one of the game’s most reliable full-backs in Zanetti and made it look so simple.

Incredibly, Wenger said after the match he had been struggling with a hamstring strain and wanted to come off.

“Thierry wanted to come off and I got Aliadiere ready,” he said.

“But just at that moment he got the ball again and I was surprised how much he went again and made the difference.

“Maybe he thought it would be his last action on the pitch and gave everything he had left to score that goal.”

Wenger’s men did not relent in piling on the pressure, with Henry at the forefront of their attacking moves again. This time he was deployed from the right as he tried to pick out Pires, but the ball trickled away from his feet.

Toldo sprinted off his line and misjudged the bobbling ball on the San Siro surface and the Italian could only watch as it found its way to Edu, who calmly rolled home into the empty net and celebrated by ripping off his shirt in front of the away fans.

Inter’s misery was encapsulated when substitute Jeremie Aliadere chased an innocuous ball forward and edged out Ivan Cordoba before squaring to Pires. The playmaker lost control of the ball with a loose touch but shrugged off Cordoba to find the back of the net.

The scoreboard read ‘Internazionale 1-5 Arsenal’ and through the tears and joy, some Arsenal fans might have had to rub their eyes for a second look.

The humiliation was complete for the Nerazzurri as the visitors ran riot and rode the wave of adrenaline. They had dealt the Italians their worst-ever home defeat in the Champions League and to this day, 18 years later, it has still not been surpassed.

For the loyal Arsenal fans who had made the trip to Italy, it was the most euphoric night they could have possibly imagined. The way their team had played such slick and entertaining football with devastating results was mesmeric.

It set the scene for their ‘Invincibles’ season of 2003-04, when under Wenger they went an entire league campaign unbeaten. Their run in the Champions League was halted by Chelsea, but their league success would prove to be the perfect tonic for forgetting about their exit.

Things look very different for the club now, with the Champions League a distant memory after four seasons outside of the competition and Mikel Arteta in charge. Inter, meanwhile, clinched the Scudetto for the first time in a decade under Antonio Conte last season.

But at least Arsenal will always have that night in Milan when Henry and co showed the true and unbridled joy of what happens when total football comes together.