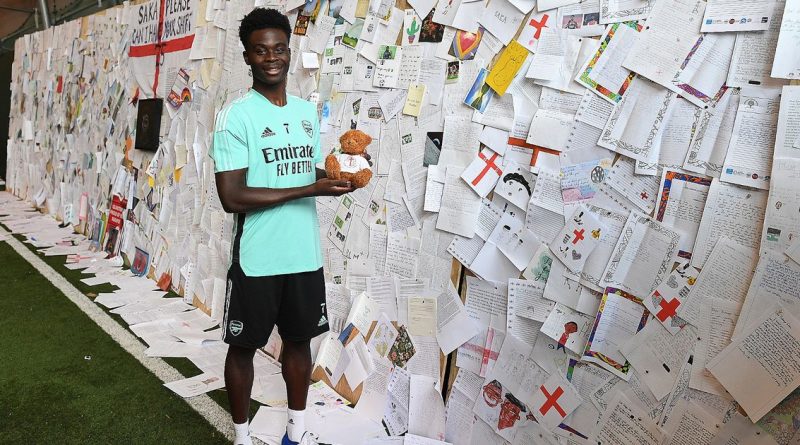 Arsenal midfielder Bukayo Saka was left ‘speechless’ by messages of support following his emotional return to pre-season training on Wednesday.

Numerous fans left touching tributes at the training ground, including letters, cards and teddy bears voicing their support for the young star – who was racially abused on social media following his penalty miss in the Euro 2020 final against Italy.

England team-mates Marcus Rashford and Jadon Sancho were also subjected to racial hatred online after also missing their penalties in the shootout loss.

Arsenal took to Twitter to post a video of the young England star which showed Saka’s reaction to the fans messages.

Saka could be heard in the video saying “Oh my god, I’m speechless” and “How do I even say thank you for all of this?,” as he walked towards the plethora of tributes.

The 19-year-old was granted an extended break by Arsenal following his involvement with England at Euro 2020.

The England youngster endured an impressive season with Arsenal during the last campaign, which subsequently earned him a call-up to Gareth Southgate’s 26-man England squad for Euro 2020.

Saka was made to wait for his chance to showcase his abilities at the tournament but silenced any critics with a Star of the Match performance in England’s final group stage match against Czech Republic at Wembley.

The Arsenal youngster then continued his rich vein of form by impressing against Germany in the last-16 and Denmark in the semi-final.

Saka is a versatile player who has been used in a variety of positions by Mikel Arteta.

Will Mikel Arteta make anymore signings before the transfer window closes? Comment below


The Arsenal manager deployed Saka on either wing, and even at left-back, but his preferred position remains on the left side of midfield.

The Arsenal youngster was given his Premier League debut at 17 by former boss Unai Emery, in a 4-1 win against Fulham in December 2018.

“To the social media platforms @instagram @twitter @facebook I don’t want any child or adult to have to receive the hateful and hurtful messages that me Marcus and Jadon have received this week.

“I knew instantly the kind of hate that I was about to receive and that is a sad reality that your powerful platforms are not doing enough to stop these messages,” said Saka.


“There is no place for racism or hate of any kind in football or in any area of society and to the majority of people coming together to call out the people sending these messages, by taking action and reporting these comments to the police and by driving out the hate by being kind to one another, we will win.”

Saka will now focus his attention on regaining his fitness ahead of his side’s opening game of the season against newly-promoted Brentford on August 13.

The Gunners then have two tricky encounters against rivals Chelsea and defending champions Manchester City.