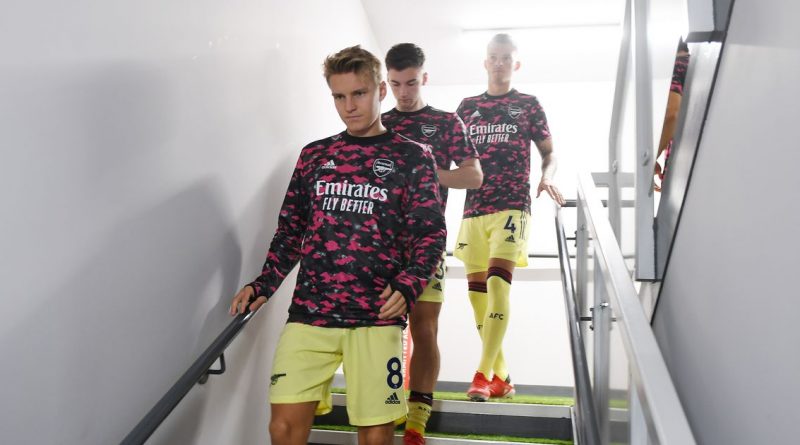 
Mikel Arteta’s side travelled to Turf Moor in search of their first away win of the Premier League season, but Covid-19 protocols meant they had to use a different changing room to normal

Arsenal were forced to go back to basis with their unorthodox changing room facilities at Turf Moor for their visit to Burnley on Saturday.

As one of the more traditional stadiums in the Premier League, the Clarets’ changing rooms are too small to comply with the Covid-19 protocols around social distancing.

While matches took place behind closed doors last season, Burnley utilised a wedding-style marquee to ensure they met the guidance laid down to combat the coronavirus.

But with fans back in grounds for this term, the Lancashire club were forced to come up with an alternative, which the Gunners were giving a viewing of this weekend.

Mikel Arteta’s men travelled north in search of their first away win of the new campaign, with the hosts winless heading into the clash.

They were greeted by rather unorthodox changing facilities, which included no pegs to hang up their shirts, with the kitmen using chairs instead.

Shorts and socks were placed on a second chair, with boots, sliders and shinpads stacked on the floor underneath.

There was also a sizeable distance between each player, to comply with the Premier League’s continuing protocols.

Yoga mats and stretch bands were also placed on the floor in the room, which is in the south east corner of the stadium.

A temporary massage table was also set up for the Gunners, while the floor itself was covered by Roll and Stroll carpet protector.

It is someway from the Emirates Stadium’s sizeable dressing rooms, with the current facilities at Burnley more reminiscent of Sunday league.

That back to basis approach to the changing rooms merely set the scene for what was not an easy trip to Lancashire for Arteta’s men.

Who was Arsenal’s man of the match in their win against Burnley? Comment below.

They largely stood up to that test, before Martin Odegaard broke the deadlock with a free-kick 30 minutes into the match.

That was Odegaard’s first goal since returning to Arsenal on a permanent deal, though it was a lead that looked in danger of being thrown away.

The biggest threat of an equaliser came in the second period when White underhit a back-pass to Aaron Ramsdale.

That allowed Matej Vydra to make a challenge for the ball, with referee Anthony Taylor at first awarding a penalty before reversing his decision after the intervention of VAR.

Though the Gunners were dominant in the possession stakes, Dyche’s side actually had more shots and corners than their visitors.

Ultimately, Arsenal were able to hold on with a single goal, with the win moving them to 12 th in the table.

Having been forced to contend with Burnley’s direct tactics and back to basis dressing room facilities, Arteta will be happy his men showed the character required to put those to one side and secure three points.