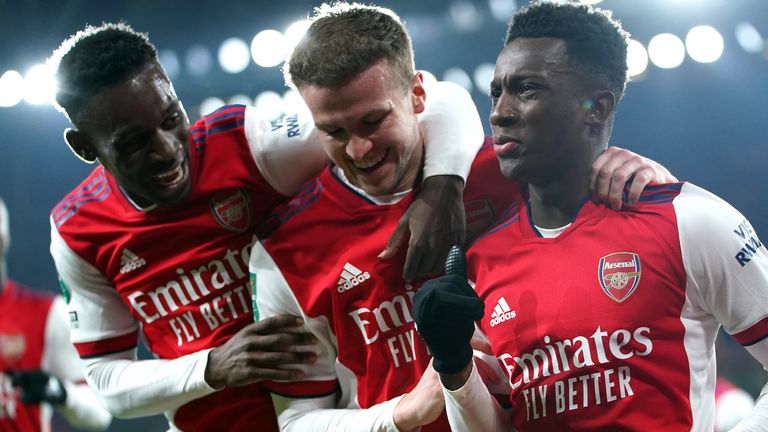 
Eddie Nketiah scored a hat-trick to steer Arsenal past Sunderland and into the Carabao Cup semi-finals with a 5-1 victory.

Striker Nketiah and Nicolas Pepe got Arsenal on their way in the first half at the Emirates Stadium, before Nathan Broadhead pulled one back for the League One side.

Two more fine finishes from Nketiah after the break sealed a comprehensive win, however, while 18-year-old Charlie Patino rounded off a fine night for the Gunners with a late goal on his senior debut.

Nketiah steals the show as Arsenal romp to victory

Mikel Arteta made nine Arsenal changes, but it didn’t seem to halt the recent momentum that has seen them surge into the Premier League top four.

Nketiah gave them the lead on 17 minutes, as he showed off his predatory instincts to turn the ball home following a corner, after Lee Burge had pushed Rob Holding’s header into his path.

Pepe doubled their advantage 10 minutes later, after combining well with Cedric down the right before seeing his effort deflect off of Callum Doyle and past the unfortunate Burge.

Sunderland soon fought their way back into the game, however. After 31 minutes Alex Pritchard did brilliantly to launch a swift attack, which was continued by Dan Neil and Elliot Embleton, before the latter fed through Broadhead and he dinked it brilliantly over Bernd Leno.

Broadhead was forced off just before the break, however, and with his departure went much of Sunderland’s goal threat. Arsenal soon took control of things shortly after half-time, as Nketiah turned home a Nuno Tavares cross with a lovely flicked finish in the 49th minute, and then from Pepe’s ball with a delightful backheel just before the hour.

Youngster Patino then came off the bench late on for his debut and put the icing on the cake for Arsenal in the first minute of stoppage time, as he latched onto Pepe’s cross before sliding in his first senior goal.

How Patino got his first Arsenal goal

The match may have belonged mostly to Nketiah, but there was plenty of excitement late on as 18-year-old Charlie Patino came off the bench to make his senior debut and score his first Arsenal goal. It may not be the last time we see the teenager celebrating at the Emirates… 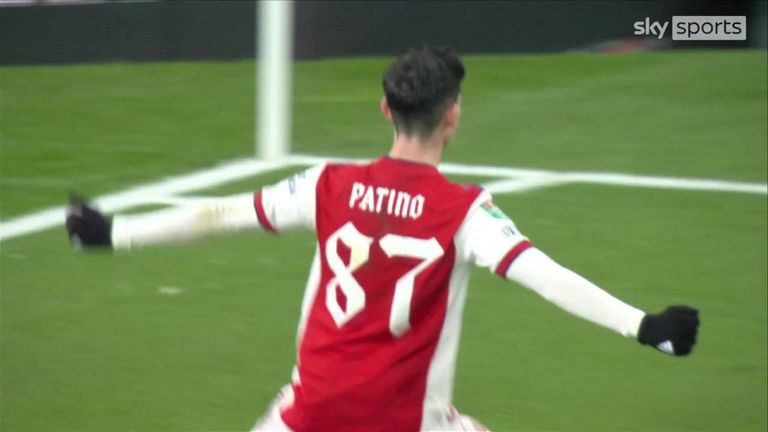 Charlie Patino came off the bench to grab a debut goal and secure Arsenal’s 5-1 win against Sunderland in the Carabao Cup.

Man of the Match: Eddie Nketiah Eddie Nketiah was named Carabao Cup man of the match after his hat-trick against Sunderland and he hopes for first team opportunities at the Gunners despite reports that he has turned down a contract offer.

It may have been against League One opposition, but with Pierre-Emerick Aubameyang still out in the cold at Arsenal, Nketiah did his own reputation no harm with a lethal performance.

Three clinical, instinctive finishes would certainly have provided food for thought for Arteta ahead of a busy run of fixtures during the winter. Nketiah will hope he has done enough to be seen again before the semi-final.

When is the draw for the Carabao Cup quarter-finals?

Arsenal will travel to Norwich on Boxing Day in the Premier League; kick-off 3pm. Sunderland will next play on Monday December 27 in League One, taking on Doncaster live on Sky Sports Football.