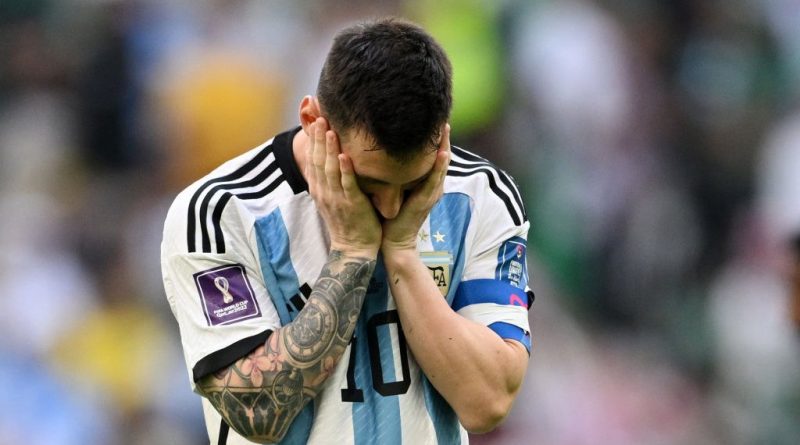 
The Qatar 2022 World Cup just witnessed its first shocking result—and it was one for the ages.

Saudi Arabia, a neighbor to host country Qatar, upset Argentina 2-1 in the opening match of Group C play on Tuesday afternoon in Lusail. The result left Argentinian supporters stunned in their seats in Lusail Stadium, and set off a wild celebration among Saudis in the partisan crowd and at the nearby Fan Fest. The country’s innovative high 4-4-1-1 formation put constant pressure on the heavily favored Argentinians, and key defensive plays late in the fixture saved the day for the Saudis.

One of the most compelling World Cup storylines was the quest of 35-year-old Argentine superstar Lionel Messi, the six-time FIFA World Player of the Year, to finally win a World Cup title. Messi, who scored Argentina’s lone goal on a penalty in the 10th minute against Saudi Arabia, reached the final at the 2014 World Cup in Brazil; but Argentina lost to Germany. The World Cup is far from over for Messi and his mates: there’s still a path out of the Group stage and into the Round of 16. But things are now messy for Messi.

Messi got his first shot on goal in the second minute on Tuesday. But keeper Mohammed Al-Owais made a slick one-handed diving save to keep the match scoreless. After Messi’s penalty gave Argentina a 1-0 lead, Argentina threatened to run away with the match: but a trio of offside calls negated a goal by Messi, and two by Lautaro Martinez.

Fortunate to be down 1-0 at half-time, Saudi Arabia pounced just after the break. In the 48th minute, Saleh Alshehri evened the match with a left-footed strike. Some five minutes later, Salem Aldawsari lasered a shot inside the far post. Argentina keeper Emiliano Martíinez could only get a finger on it, and now Saudi Arabia owned an improbable 2-1 lead.

From there, Al-Owais shined. He dove to his right to stop a point-blank shot near the goal in the 83rd minute. About 10 minutes later, in stoppage time, Al-Owais got a little help: he came off his line, and went down in a collision. But in the fray Abdulelah Al-Amri smartly slipped to the goal line, and stopped a potential game-tying shot with his head. Moments later, in the waning seconds of the game, #3 had a clear look with a header: but Al-Owais leapt, as high as he possibly could, to cradle it. Saudi Arabia then waited for the whistle, which finally called the game. The Saudis had finished the stunner.

What the results mean for Saudi Arabia and Argentina

Saudi Arabia stands 51st in the FIFA World Rankings; Argentina is third. Mexico (#13) and Poland (#26), which features two-time defending FIFA Player of the Year Robert Lewandoswki, round out Group C. Coming into this game Argentina had the third-best chance at winning the World Cup, behind only Brazil and France, according to analytics firm Sports Perform. While Argentina had a 10.5% chance to win the title, Saudi Arabia has a 0.06% chance. In other words, Argentina was 175 times more likely to win the title than Saudi Arabia. Sports Perform’s AI model gave Argentina an 87% chance of advancing to the knockout stage; Saudi Arabia was the second-least likely team, at 19%, to advance of all 32 teams in the Group stage, ahead of only Costa Rica.

Throw all the numbers away now. After today’s game, the big question is whether this upset will be an aberration or prove enough to shake the confidence of Messi’s Argentina, which until today had a 36-match winning streak that was closing in on the prior record of 37 set by Italy. Soccer is a national obsession in Argentina, which has long produced some of the world’s best players, such as Messi and the late Diego Maradona. Indeed, the last time Argentina won the World Cup was in 1986, in Maradona’s prime, a fact not lost on the 35-year-old soccer star.

Read More: The World Cup Kicks Off with a Loss for Host Qatar

In a March 2019 interview with South Africa’s Radio 94.7., Messi cited Argentina’s loss to France in the Round of 16 in the 2018 World Cup in Russia as a career low point, prompting his break from international participation. “I thought about locking myself up, running away with my family and forgetting everything,” he said. “I tried to isolate myself from everything for a while, including the national team.” He also expressed that it would have been “the biggest failure in the history of the Argentina national team” if they had been knocked out a round earlier.

Messi is not alone in his pursuit for the “greatest of all time” status. Portugal forward Cristiano Ronaldo is also on his fifth attempt to lead his nation to its first-ever World Cup victory. Both players have scored seven World Cup goals across their career and they are often described as rivals.

Write to Sean Gregory at sean.gregory@time.com and Armani Syed at armani.syed@time.com.