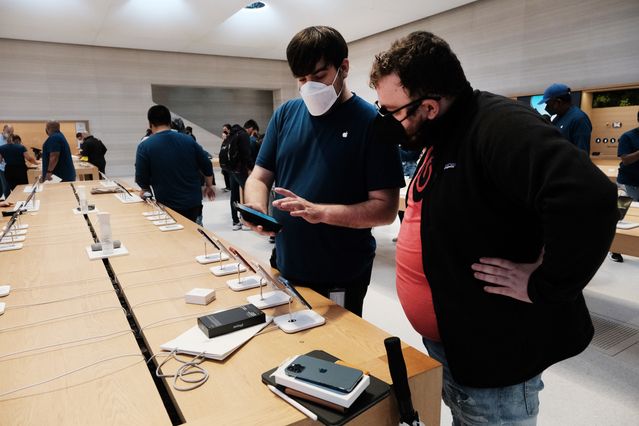 
Analysts continue to crank out bullish notes about Apple‘s outlook ahead of the tech giant’s December-quarter earnings report, due just two weeks from now.

(ticker: AAPL) had a big run in late 2021, pushing the stock close to the $3 trillion market capitalization level, a milestone no company has previously reached. Bulls think results for the fiscal first quarter ended Dec. 31 could spur the stock to finally eclipse that hurdle.

Apple shares on Friday were up fractionally, at $172.34, in recent trading. The company’s market cap sits at $2.81 trillion.

Loop Capital Markets analyst Ananda Baruah on Friday repeated his Buy rating on Apple shares, lifting his price target to $210, from $165. He believes the company will surpass Street expectations both on iPhone units sold and for average selling prices in fiscal 2022. Apple could post 10% to 15% growth in both iPhone and overall revenue this year, he writes, which would be well ahead of the Street consensus forecast for 4.4% growth.

A weekly guide to our best stories on technology, disruption, and the people and stocks in the middle of it all.

Piper Sandler analyst Harsh Kumar likewise repeated his Overweight rating on Apple shares on Friday, while lifting his price target to $200 from $175. “We believe Apple has a favorable set-up for 2022,” he writes in a research note. “We believe iPhone momentum will continue due to 5G adoption, particularly in the United States and China. In addition, we see growth in services and wearables offsetting some of our growth concerns in Mac and iPads.”

Kumar adds that he sees healthcare and autos as “the next major growth markets for the company.” The move into those markets, he says, should set up the company to expand its valuation to $4 trillion and beyond.

“In healthcare, we see the Apple Watch continuing to add more and more features, with the goal of eventually offering a blood sugar monitoring system,” he writes. “Within automotive, reports continue to circulate of the company’s entry into the market. We believe the move makes sense, given the car represents a hardware platform on which Apple can sell its services.”