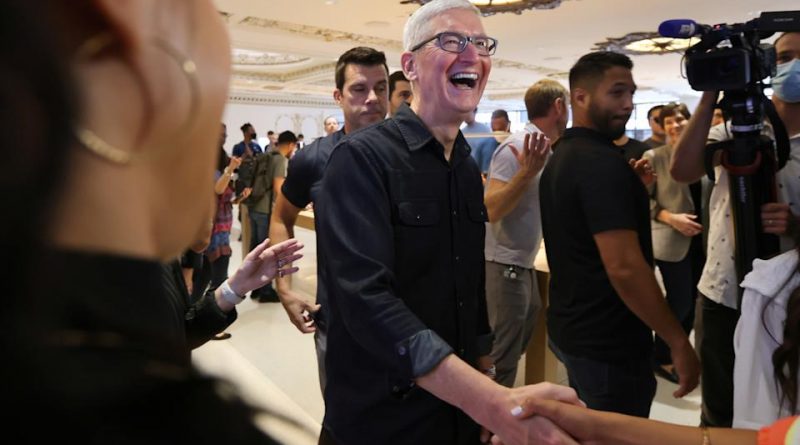 To top it off, the company continues to dominate in one of its most important markets: China. Revenue in the region, Apple’s third largest, jumped 20% on the strength of iPhone 13 sales.

Yes, part of that likely stems from the fall of China’s Huawei, which has been cut off from everything from chips to the Android operating system due to U.S. intervention. It’s a massive boon for Apple nonetheless. What’s more, the company managed all of this despite the continuing global chip shortage.

And analysts say the ride isn’t over for the iPhone maker. It still has two new product categories reportedly coming down the pike: a VR/AR headset and the long-rumored Apple car. With those new categories plus a slew of new iPhones and Macs set to land this year, Apple could be on track for one of its best years ever.

“They beat a lot, and imagine if they didn’t have the supply constraints,” Citi managing director in equity research Jim Suva told Yahoo Finance Live. “[It’s] scary in a good way of how much demand is out there for the Apple products.”

Of course, Apple’s iPhone line generated most of its revenue last quarter. The phones raked in an incredible $71.6 billion in revenue, a 9% jump over Q1 2021. That works out to 57.7% of Apple’s total quarterly revenue.

That revenue came in despite Apple having to contend with the global chip shortage, which dinged sales of its iPad in the quarter.

“We would characterize this quarter as a ‘stunner’ on iPhone/Services demand and Cupertino’s ability to navigate a supply chain shortage in almost Teflon-like fashion,” Wedbush analyst Dan Ives wrote in an investor note.

And the company is expected to launch a 5G-capable iPhone SE sometime in March or April, Bloomberg reports. That device should have a starting price lower than the iPhone 13 mini, which is priced at $699, helping to bring in consumers who want to get into the Apple ecosystem without breaking the bank. For reference, the current iPhone SE sells for $399.

With news that Apple could soon allow the iPhone to receive contactless credit card payments in the coming months, a potentially massive blow to the likes of Block’s Square (SQ), the company could see even greater interest from small and medium businesses.

Couple that with its small and medium business outreach, which includes special pricing on the company’s collection of business-ready apps and customer support, and the iPhone looks to be set for a strong 2022. And that’s without including Apple’s iPhone 13 successor, which will likely be announced sometime in September.

New product lines will drive the company into the future

While the iPhone is certainly Apple’s most important device, investors and analysts are looking to the future, namely the new product lines Apple is expected to announce in the coming months and years.

The company’s long-rumored AR/VR headset is said to land sometime this year. While it could be priced as high as $3,500, it could help drive AR and VR adoption and also put Apple at the top of the heap when it comes to the metaverse, the 3-D version of the internet that inspired Facebook (FB) to change its name.

“We think AR and VR are going to be very big for Apple,” Suva said. “Apple may not be the first into areas, but when they go in, their product is really premium and [a] really good to great user experience.”

Apple CEO Tim Cook pointed to the company’s ongoing work in AR in his remarks during Apple’s earnings call, but stayed away from mentioning the metaverse in particular.

“We see a lot of potential in this space and are investing accordingly,” Cook said.

It’s not just Apple’s upcoming headset that’s driving investor interest. The company is also in the midst of developing its own self-driving electric car, which, if it comes to fruition, would open up an entirely new market for Apple. It’ll have steep competition from the likes of Tesla (TSLA) and legacy automakers like GM (GM) and Ford (F) that are plowing money into the EV space — but Apple’s name recognition alone could help power vehicle sales.

“I expect investor anticipation of the new addressable markets over the next five years — including the metaverse and autonomy — to increase [Apple’s price] multiple to 35x,” Loup Ventures’ Gene Munster wrote in a note following Apple’s earnings release. The company’s shares are currently trading at a 30x multiple.

All of this, of course, depends on whether Apple enters these markets to begin with. Hopefully, we’ll find out more later this year.

Got a tip? Email Daniel Howley at dhowley@yahoofinance.com over via encrypted mail at danielphowley@protonmail.com, and follow him on Twitter at @DanielHowley.