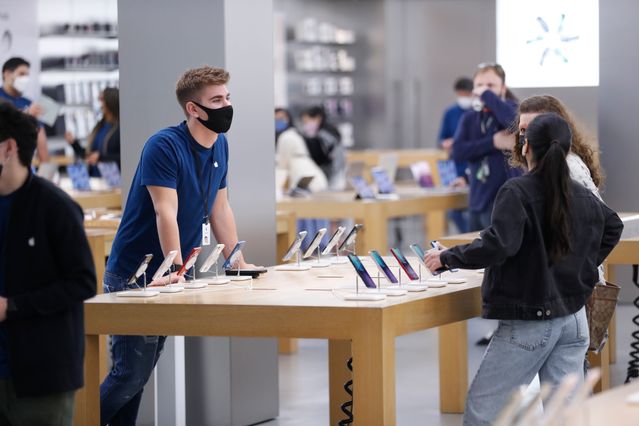 shares gave back some gains notched in recent weeks as the Federal Reserve’s signal that interest rates will rise spurred widespread selling in the technology sector.


Nasdaq Composite
is off 2.4% on the day, while Apple–which accounts for about 10% of the value of the index–has fallen 3.5%, underperforming both the broader market and the rest of the tech megacaps.

Concerns about Chinese iPhone sales also could be contributing to the stock weakness at Apple.

Still, the drop doesn’t necessarily indicate any big problems at Apple (ticker: AAPL). Apple shares had been on fire: from Nov. 11 through yesterday’s close. The stock rallied 21%, in a period when the Nasdaq Composite was basically flat and the


S&P 500
was up 1%, leaving the stock a hair’s breadth away from hitting a market cap of $3 trillion for the first time. It seems reasonable to expect a little profit-taking. Even with today’s slide the stock is up more than 7% over just the last nine trading days.

The rest of the tech megacaps are sporting more modest losses, with

(CSCO) all about 1% higher. Telco and cable stocks are thriving as well, with

(CMCSA) up 1.9%. Dividend-paying stocks tend to perform well when inflation is rising – and all of those stocks have yields of at least 2%. Apple shares have a yield of 0.5%.

Another potential concern for Apple: Several analysts noted that new data from China shows that iPhone sales there were up 4% on a year-over-year basis in November, off a very difficult comparison. In the year-ago month, China iPhone sales had spiked 90%. But the data also showed some market-share loss in the month to China-based Android phone manufacturers.

Meanwhile, KeyBanc analyst John Vinh wrote in a research note Wednesday that a new carrier survey finds that iPhone 13 supply “remains heavily constrained” as demand continued to outstrip availability during the Thanksgiving holiday period. He writes that the majority of stores reported no inventory of iPhone 13 Pro and Pro Max models, with average days of inventory running under 1 day. Vinh writes that November domestic iPhone sales appears to be up 27% from October but down 4% year-over-year, reflecting supply constraints that have eased somewhat in recent weeks.