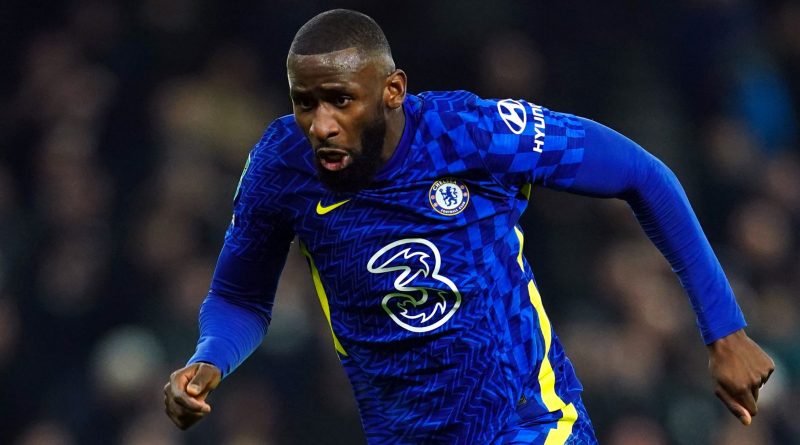 
Chelsea’s soon-to-be out-of-contract Antonio Rudiger said he has enjoyed this chapter of his career while Jamie Redknapp has urged the club to sign him up.

Rudiger helped Chelsea book their place in the Carabao Cup final with a 3-0 semi-final aggregate win over Tottenham on Wednesday night.

Thomas Tuchel’s men did half the job in last week’s first leg at Stamford Bridge when they won 2-0 and Rudiger’s first-half goal in north London settled matters, setting up a Wembley date against either Liverpool or Arsenal next month.

The Germany international is out of contract at the end of the season and there has been much speculation about his future. Barcelona are monitoring the defender’s situation, while Real Madrid, PSG, Bayern Munich and Juventus have opened talks with his representatives.

The 28-year-old maintains he is happy at Chelsea, although there does not seem to be an imminent resolution forthcoming between the two parties. According to Sky Sports News, Rudiger is in no rush to sign a pre-contract agreement with a new club, and the German international is aware there could be interest from Premier League sides if he becomes a free agent in the summer.

After his man of the match display against Spurs, Rudiger said on Sky Sports: “I am enjoying it. I think you have to see it about chapters, and I have enjoyed this chapter, I have enjoyed it so far. It is the best time of my career.”

Thomas Tuchel has previously admitted he was hopeful Rudiger was aware of his admiration of his work, having turned him from a fringe player into a mainstay of his Chelsea defence since he was appointed head coach a year ago.

When asked after the victory if it would be hard to replace a player like Rudiger, Tuchel responded: “There is a lot of ifs in your question so let’s see what becomes the reality. We have confidence [to keep him] and have things to offer. He is the player he is in a Chelsea shirt and in the Chelsea environment. I think he knows that very well.”

Chelsea manager Thomas Tuchel was unhappy with his side’s performance against Tottenham, despite reaching the Carabao Cup Final with a 1-0 victory at the Tottenham Hotspur Stadium.

Sky Sports’ Jamie Redknapp has called on the Chelsea hierarchy to listen to the demands of Rudiger and get him signed as quickly as possible, pointing to the finances required to sign a replacement of similar standard.

Redknapp: “You have to sign him up. If you were to let him go in the summer you’ll need to spend £50million to replace him and then have to give that player big wages. Chelsea are better off signing him and telling him how much of a massive part of the football club he is. It’s all there for him. He can achieve all the ambitions as the owner has always spent big money. They need to get him signed up quickly.”

He told Sky Sports: “To keep players like Rudiger with that character is a must. You can’t lose top, top players like him from your dressing room. He can do everything. He can start attacks and is very brave and shows personality on the ball. It’s hard to beat him one-on-one. He’s becoming a leader and although he’s temperamental at times the fans love him. That’s what makes him who he is.

“We’re not privy to conversations between the agent and Chelsea. We don’t know how far along the negotiations have gone. But from looking in from the outside, his performances means he needs to stay a Chelsea player.”

Highlights of the Carabao Cup semi-final second leg between Tottenham and Chelsea.

“It’s something we have been talking about for the last few months when we knew Antonio Rudiger was entering the final year of his contract at Chelsea.

“As far as I’m aware now, Rudiger is in no rush to sign a pre-contract agreement with a foreign club this month. Earlier this week we did say the likes of Real Madrid, Juventus, PSG and Bayern Munich had all made contact with Rudiger’s representatives about a pre-contract. We are now told Barcelona are just keeping an eye on Rudiger’s situation, as well as their own situation to see if they could do such a deal.

“Signing a new contract at Stamford Bridge, as I have said before, that has not been ruled out. But what I have been saying for the past few months is if Chelsea are to keep Rudiger at Stamford Bridge, I’m told they’d have to make him the highest-paid defender in the Premier League.

“Rudiger turns 29 in March. This next contract could be his last big contract of his career. So, you can’t blame him for just taking a step back to make the right decision for his career.

“Make no mistake about it, Chelsea are desperate to keep him. They do want to keep and of course, that could still happen. If he hasn’t signed a pre-contract agreement with anyone, all options are still open.”