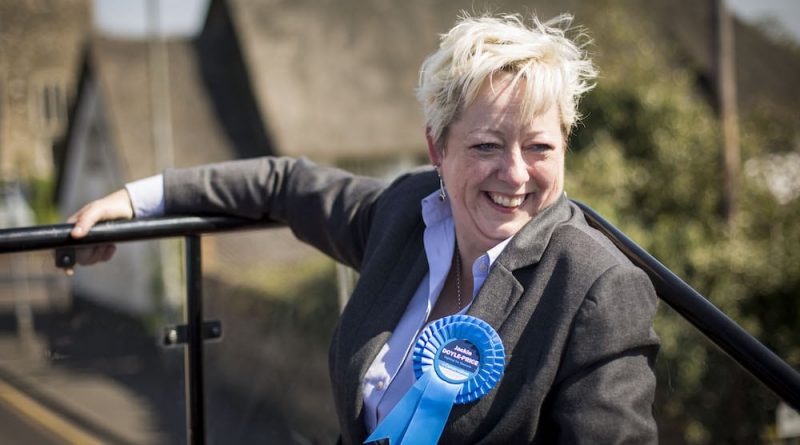 Tory MP Jackie Doyle-Price, who voted against same-sex marriage and thinks trans rights are “regressive”, has been quietly appointed to parliament’s Women and Equalities Committee.

The committee’s role is to hold the Government Equalities Office to account on issues of expenditure, administration and policy, and it is made up of cross-party MPs.

According to her parliament profile, Doyle-Price was appointed to the committee on 2 November, however neither she nor any member of the committee has publicly acknowledged her new role.

She appears to have replaced Nicola Richards, the Conservative MP for West Bromwich East who left the committee on 2 November. Her office told PinkNews she “regrettably left the Women and Equalities Select Committee because of time constraints”.

PinkNews has approached the Women and Equalities Committee for comment.

Jackie Doyle-Price has an extensive history of anti-LGBT+ comments

Jackie Doyle-Price has made no secret of her opposition to LGBT+ rights during her political career.

In 2013, the MP for Thurrock voted against marriage equality, and later abstained from a vote on extending same-sex marriage to Northern Ireland. To this day, she continues to defend her stance.

“I don’t support the state interfering with religious sacraments. All civil marriages should be styled civil unions. That’s what informed my vote on same-sex marriage.”

Doyle-Price has attempted in recent years to style herself as a defender of lesbians by joining the “gender critical” anti-trans rights movement.

This pronoun nonsense is being embedded throughout our public sector. Why is everyone being forced to have a gender identity? To what purpose? Other than the further embedding of this ridiculous ideology which wants to replace sex with gender. Say no to pronouns ! https://t.co/PWNnd5ZOSv

In 2020, in an appearance on the podcast of Posie Parker, who has been banned from Twitter for “hateful conduct” and has given interviews to white nationalists, Doyle-Price described trans rights as “regressive” and gender-affirming healthcare as “dangerous”.

The MP, who has repeatedly pledged her support for the anti-trans pressure group LGB Alliance, said: “It’s really regressive that we’ve almost re-adopted gender stereotyping and almost turned it into a science.

“We all know going through puberty is not a pleasant time and some girls will feel very uncomfortable with their bodies. And the fact this movement is encouraging them to think, ‘Well, you might not really be a girl’ in childhood, I just think is so dangerous. And we just need to give children the chance to grow up.”

On International Women’s Day (11 March) this year, Doyle-Price shockingly used the death of Sarah Everard to push her narrative against trans rights.

Speaking during a debate in parliament, she discussed Everard’s death and the widespread problem of sexual violence and harassment faced by women in the UK, and continued: “It is so sad that it takes such a horrendous case as the one we are living through at the moment to bring that home, but this has become normalised.

“That is why I make no apology for continuing to fight for women’s safe spaces.”

She bizarrely used her speech to “pay tribute to Keira Bell“, who fought a legal battle to deprive trans kids of life-saving puberty blockers, adding: “She realised that her issue was not that she wanted to be a man; she was a lesbian. This brings home the real difficulty we have with gender dysphoria treatment for children.

“We must ensure that our pathways are safe and that we do not make young girls do things that are irreversible when the issue is their sexuality.”

Of course anything that seeks to ‘cure’ people of their sexuality must be outlawed. I worry about the use of the term ‘therapy’. Gay conversion is banned already in British Psychotherapy. Therapy is however a necessary part of the treatment pathway for gender dysphoria https://t.co/bEZnoakjTE

Doyle-Price also recently announced that she would no longer use Dove soap, after the brand publicly supported trans inclusion in sport, has spoken in opposition to a proposed government ban on conversion therapy, and suggested that Boy George, who was convicted for the assault and false imprisonment of a sex worker, would make a “more representative spokesman” for the LGBT+ community than PinkNews or Stonewall.