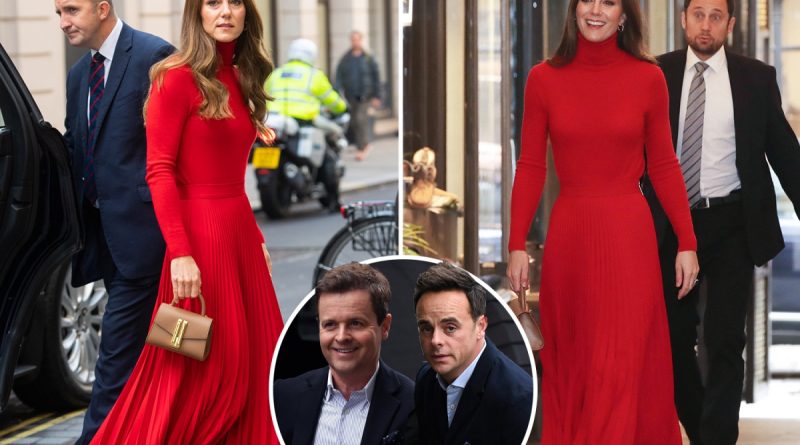 
ANT McPartlin today opened up to Kate Middleton about his drug addiction telling her “it was bad” by the time he asked for help.

The Duchess of Cambridge met with TV duo Ant and Dec to discuss the devastating impacts of addiction, as well as give a much-anticipated keynote speech.

Kate told how drug dependency can affect anyone as she launched new charity project Taking Action on Addiction.

A raft of celebs, beneficiaries and other charity heroes were seen arriving at the event at the BAFTA headquarters Piccadilly, London today.

The event to launch Taking Action on Addiction is hosted by the Forward Trust and charitable partners.

A long-standing patron of the charity, the Duchess delivered a keynote speech on how nobody is “immune” to addiction.

She said: “Addiction is not a choice. No-one chooses to become an addict.

“But it can happen to any one of us. None of us are immune.”

She added: “Yet it’s all too rarely discussed as a serious mental health condition.

“And seldom do we take the time to uncover and fully understand its fundamental root causes.

“The journey towards addiction is often multi-layered and complex. But, by recognising what lies beneath addiction, we can help remove the taboo and shame that sadly surrounds it.”

The duchess discussed how the pandemic has had a “devastating impact” on addiction rates.

“Families and children are having to cope with addiction in greater numbers than ever before,” she said.

“We know that over one and a half million people across the UK who did not have substance misuse prior to lockdown may now be experiencing problems associated with increased alcohol consumption.

‘IT CAN HAPPEN TO ANY ONE OF US’

“Around two million individuals who were identified as being in recovery may have experienced a relapse over the past 18 months.

“Almost one million young people and children are showing an increase in addictive behaviour since the pandemic began.”

The TV favourite has spoken openly about his own treatment for substance addiction.

Dec was supported by his wife, Ali Astall.

The duchess spoke with Ant and Dec about Ant’s former addiction problems.

Ant struggled with a two-year addiction to super-strength painkillers following a knee operation in 2015.

He crashed his car in 2018 while more than twice the alcohol limit, before entering rehab.

Ant told Kate: “I found that, myself, by the time I asked for help – it was bad.

“But as soon as you opened up to people, problems have got to disappear.

“It gets better and help is there.”

Kate stepped out in a stunning red ensemble complete with a trendy DeMellier micro handbag priced at  £295.

She completed the look with matching heels.

And she spoke earlier this year about how there must be a focus on addiction “so that we can create a happier, healthier, more nurturing society.”

She praised the “passion and expertise” of staff and volunteers as she became a patron of the Forward Trust in June 2021.

She is set to meet beneficiaries of the charity as well as supporters.

The Duchess will hear real-life stories about addiction and how sufferers overcame it.

The event coincides with Addiction Awareness Week this week.

The week-long event aims to highlight the challenges of addiction.