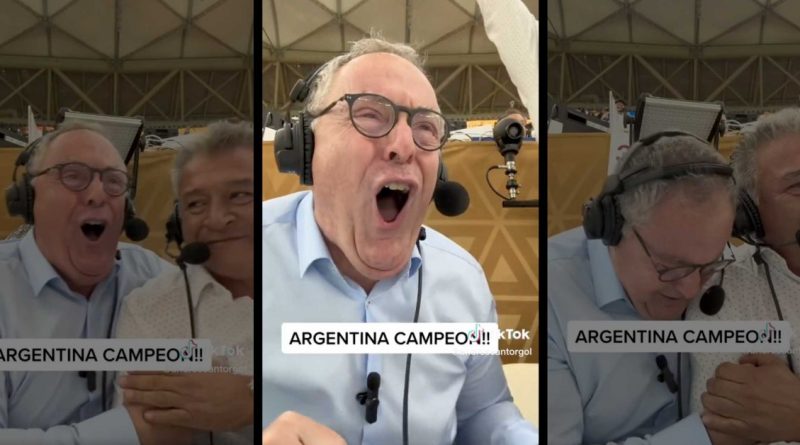 Argentina is the champion of the world!

Cantor bowed his head and continued to shout his joy through tears. “Messi campeon del mundo,” Cantor said, a nod to Argentina superstar Lionel Messi, who scored a pair of goals in the final and won the Golden Ball as the World Cup’s best player, in earning the first world title of his storied career. Cantor was born in Buenos Aires and moved to the United States as a teenager. In this moment, Cantor failed to cloak his childlike fandom in rote professionalism—and sports fans around the world loved him for it.

Since we all can relate.

His reaction was far from scripted. “It was really, really hard to be calm and collected,” Cantor told TIME on Monday from Qatar, where in a few hours he would board a flight home to Miami. “I tried to keep as much composure as I could. But then when the ball went in, you know, whatever came out, came out.”

Read More: The World Cup Is Highlighting The Joys Of Arab and Latin American Soccer Commentary

It was a call and a game that Cantor—along with millions around the world—won’t soon forget. Argentina was up 2-0 late in the match, and seemed to be steamrolling to a title. France had barely threatened to score. “In the 74th minute exactly, I asked the question on air, is this really happening?” Cantor says. “I had never seen such a dominant performance of one team over the other in a World Cup final.” Six minutes later, an Argentina penalty resulted in Kylian Mbappé’s first goal, cutting the lead in half. “I said to myself, ‘why did I open my mouth and jinx this?’” says Cantor.

One minute and 33 seconds later, Mbappé volleyed a rocket to the back of the net to tie everything up. No World Cup final had ever turned around so drastically, so quickly. Messi would score again in extra time, but Mbappé could not be denied: he fired a shot that caused a handball, and converted the penalty shot for a hat-trick—the first in a men’s World Cup final since 1966.

France was about to crush Argentina’s dreams right before the final whistle. But Emiliano Martínez stuck out his left leg to nick away a shot from Randal Kolo Muani, the most crucial last-second kick save in World Cup history, bar none. “I get goosebumps just thinking how Argentina could have lost it on that,” says Cantor.

So entering the shootout, Cantor’s emotions were already frayed. Mix that dynamic in with the unique connection he shares with Argentina, and it’s no wonder Cantor struggled to contain tears when the victory was sealed.

“Soccer is part of our DNA,” Cantor tells TIME. “It really is. And in my case, football is my life. I live for football 24 hours a day. Unfortunately, I’ve missed birthdays, graduations, going out to the movies because I’m constantly watching football. And I guess it has a special connotation for expats that live outside of Argentina because we have a sense of belonging and an identification with our national team, which is really stronger by the fact that we live outside our birth country.”

For Cantor, who has called every World Cup since 1990, Messi firmly belongs in the pantheon of Argentina’s most-beloved legends. This wasn’t always the case, especially after Argentina last three straight international finals, at the 2014 World Cup and back-to-back Copa América finals in 2015 and 2016.

“That generation was seen as a bunch of losers,” says Cantor. “And so was Messi.” The tide turned, however, after Argentina’s 2021 Copa América win, and a 36-match unbeaten streak that was finally snapped by Saudi Arabia at the outset of this World Cup. “Even though he’s 35 going on 36, he had an amazing World Cup,” says Cantor. “And he’s going to be up there with with Diego as the greatest of all time.”

Read More: Messi’s World Cup Win May Have Crowned Him The GOAT

Even Cantor sometimes questions his psychological investment in the sport. “Unfortunately, we take it to a level where it seems that nothing else is important in life,” says Cantor. “Sometimes we make it about life and death in a 90-minute football match. I know it shouldn’t be that way.” Cantor often talks to former players about the psychoses of fans like him. “Why are we like this?” says Cantor. “Why have we not slept two nights before the World Cup final? What do we have at play here? The players are playing. And yet, it’s really, really part of our DNA.”

Cantor went out after the game with his daughter, who celebrated her birthday after midnight Monday in Qatar. At a restaurant at 3:30 a.m, the owner placed a replica World Cup trophy as his table. “I said, ‘wow, is this real?’” says Cantor. “‘Is this shit really happening?’” He didn’t sleep, talked to his wife back home three times and responded to a barrage of congratulatory messages, some from strangers who were moved by his call. “I didn’t know so many people had my phone number,” Cantor says.

Cantor insists he would have given France its proper due if Les Blues held on to become the first repeat champs since Brazil in 1962. “It would have been an epic moment in sport history,” Cantor says. Though he was “dying inside,” Cantor marked Germany’s win over Argentina at the 2014 World Cup Final with proper enthusiasm—he just saves tears for the Albiceleste.

“I’m overwhelmed by the reaction of Spanish-speaking and non-Spanish-speaking fans in the U.S. that are writing me messages on my feeds,” says Cantor. “I’m just doing my job. It’s like, I get emotional when I read people saying that they cried with me. And that it’s so much better when they hear a Spanish commentator. I’m just thrilled that we were able to bring some non-Spanish-speaking public to our Telemundo broadcast.”